The big Epic Games v. Apple trial concluded back in May shortly after testimony from Apple CEO Tim Cook, but it was expected to take months before a ruling was reached. Today, we have that ruling, and while it doesn't give Epic Games everything it sought in its complaint, it is still a major victory for the developer and others that feel Apple's App Store economy is too tightly restricted.

Apple is hereby permanently restrained and enjoined from prohibiting developers from including in their apps and their metadata buttons, external links, or other calls to action that direct customers to purchasing mechanisms, in addition to In-App Purchasing and (ii) communicating with customers through points of contact obtained voluntarily from customers through account registration within the app.

The one-page ruling, which you can read here, takes effect in 90 days.

Epic Games was seeking just this very thing. Including its own payment processing methods was what got it kicked out of the App Store in the first place. Thousands of apps are already allowed to include their own payment processing under Apple's rules, namely any app that sells only physical goods or services, from Amazon, Walmart, Uber, and Doordash all the way down to your local electrician or yard service. 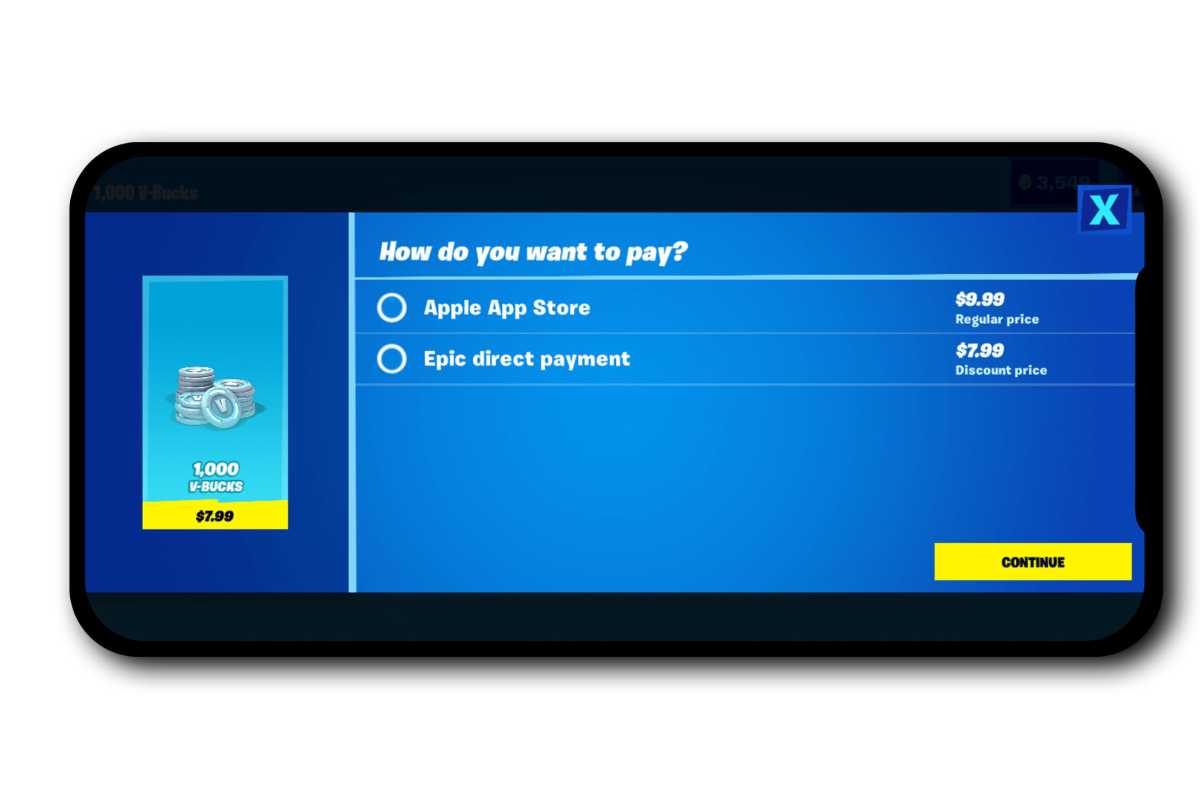 Apple removed Fortnite from the App Store after Epic offered its own payment method.

It is unclear from the language if Apple will be required to allow in-app payment processing methods other than its own (as it does allow for all those apps) or if it can restrict apps to only linking to external sites for alternative payments.

Epic Games also sought the ability to load apps onto iPhones through methods other than Apple's App Store, and even to provide alternative App Stores, similar to what we have on the Mac or on Android phones. The injunction ruling does not provide for that.

You can read the full ruling here, which expands on the judge's reasoning. In essence, the court found that Apple was not a monopolist under the law, but was engaging in anticompetitive practices in the relevant market under California's competition laws.

Nonetheless, the trial did show that Apple is engaging in anticompetitive conduct under California's competition laws. The Court concludes that Apple's anti-steering provisions hide critical information from consumers and illegally stifle consumer choice. When coupled with Apple's incipient antitrust violations, these anti-steering provisions are anticompetitive and a nationwide remedy to eliminate those provisions is warranted.

The Court disagrees with both parties' definition of the relevant market.
Ultimately, after evaluating the trial evidence, the Court finds that the relevant market here is digital mobile gaming transactions, not gaming generally and not Apple's own internal operating systems related to the App Store. The mobile gaming market itself is a $100 billion industry. The size of this market explains Epic Games' motive in bringing this action. Having penetrated all other video game markets, the mobile gaming market was Epic Games' next target and it views Apple as an impediment.
Further, the evidence demonstrates that most App Store revenue is generated by mobile gaming apps, not all apps. Thus, defining the market to focus on gaming apps is appropriate. Generally speaking, on a revenue basis, gaming apps account for approximately 70% of all App Store revenues. This 70% of revenue is generated by less than 10% of all App Store consumers. These gaming-app consumers are primarily making in-app purchases which is the focus of Epic Games' claims. By contrast, over 80% of all consumer accounts generate virtually no revenue, as 80% of all apps on the App Store are free.

This does not necessarily mean that Fortnite is coming back to the App Store. The court found that Apple's termination of the Developer Program License Agreement (DPLA) was valid, lawful, and enforceable at the time, and it will be up to Apple to decide whether to allow the app or not. Just this week, Epic asked Apple to reinstate its DPLA and allow Fortnite back on the App Store in Korea, where a new law forces Apple and Google to allow alternate in-app payment methods. While Apple has so far declined to allow the app back in the App Store, the Korean law has not yet gone into effect.

The court decision comes just before Apple's California streaming event, which will presumably showcase the iPhone 13. Apple will likely appeal the ruling.