We're well into the Norton 360 era now where the company's storied antivirus services combine with identify theft protection from LifeLock. Despite the changes behind the scenes, the front-facing product hasn't changed that much. The basic Norton security interface has looked pretty much the same since 2015 save for some cosmetic touch-ups to keep it looking modern. Under the hood, however, Norton has kept working on its malware detection technology to deal with new security threats.

We'll take a look at Norton 360's protection capabilities soon, but first let's talk about our review choice from among Norton's portfolio. By my reckoning, the best option in terms of value and capabilities in the current lineup is Norton 360 Deluxe. Norton offers two other premium suites above that with extra LifeLock features, but for most people 360 Deluxe hits the sweet spot at US$35 for the first year for new users and $105 per year for returning users, covering five devices.

All Norton 360 suites work with two primary apps. The first is My Norton, a launcher for the actual antivirus program known as Device Security. My Norton is home to other features that come with 360 Deluxe such as Dark Web Monitoring, aka Privacy Monitor, a secure VPN, 75GB of cloud backup, a password manager, and a link to the Norton website for parental controls. The company also recently introduced an anti-tracking service for web browsing called AntiTrack that's available for US$40 a year. AntiTrack blocks cookies and also prevents device fingerprinting. 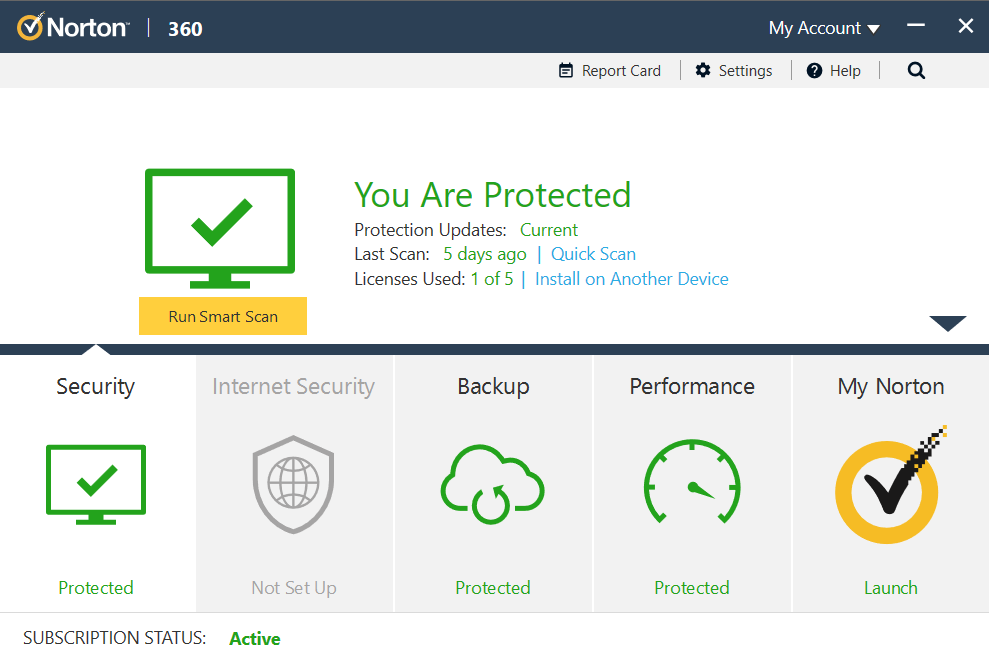 Device Security has five sections: Security, Internet Security, Backup, Performance, and My Norton. The latter is just a way to get back to the My Norton launcher.

Security is where most of the action happens. Here you can initiate a scan from a wide number of options, including a quick scan (the default), full system scan, a custom scan, and a custom task.

The Scans section can also run Norton Power Eraser for eliminating threats that regular scans can't deal with, as well diagnostics, and Norton Insightâ€”the program that determines which files should be scanned during a quick scan.

While most people will just need the quick scan and full system scan options, it's great that all these tools are easily accessible by the user. Beyond scans, the Security section also houses the SafeCam settings for keeping rogue programs away from your webcam. There isn't much to do with SafeCam, but if it's ever giving you issues, this is where you can turn it off. 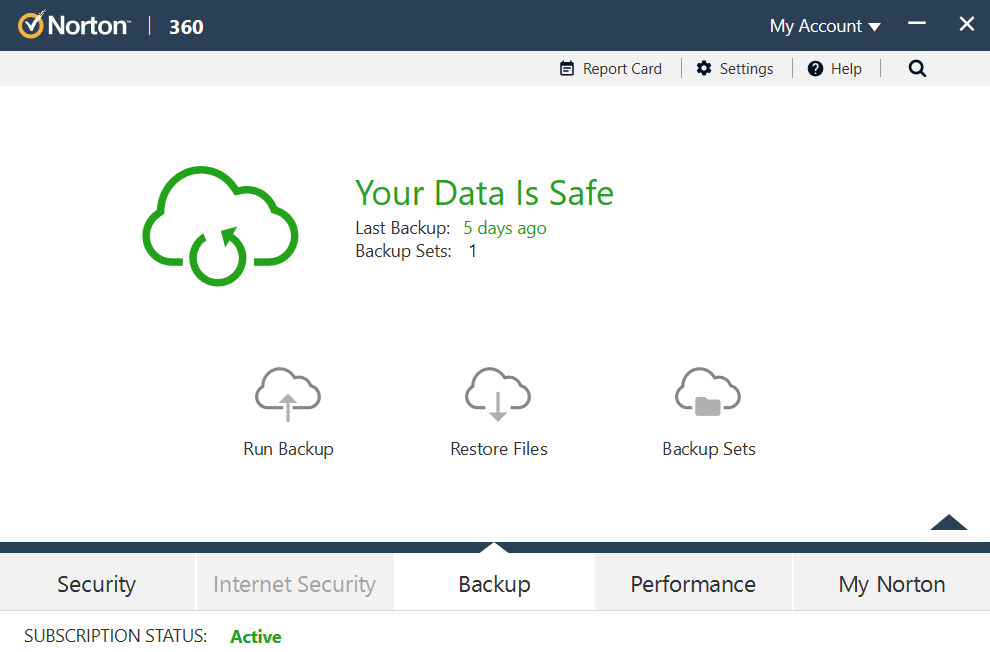 Internet Security features access to the password manager, password generator, and Norton's free browser extensions. As we've noted before, Norton doesn't bother you too much with notifications about its features; however, it does love to notify you from time to time if you don't have all of the Norton browser extensions installed.

The essential extension is Norton Safe Web, which warns you about malicious sites, and puts a green checkmark next to safe sites in your Google results and a red x next to bad ones.

Backup is pretty straightforward. Setting it up allows you to keep copies of essential files in Norton's Secure Cloud Storage. If you don't want your files in Norton's cloud there's also an option for saving to local storage. 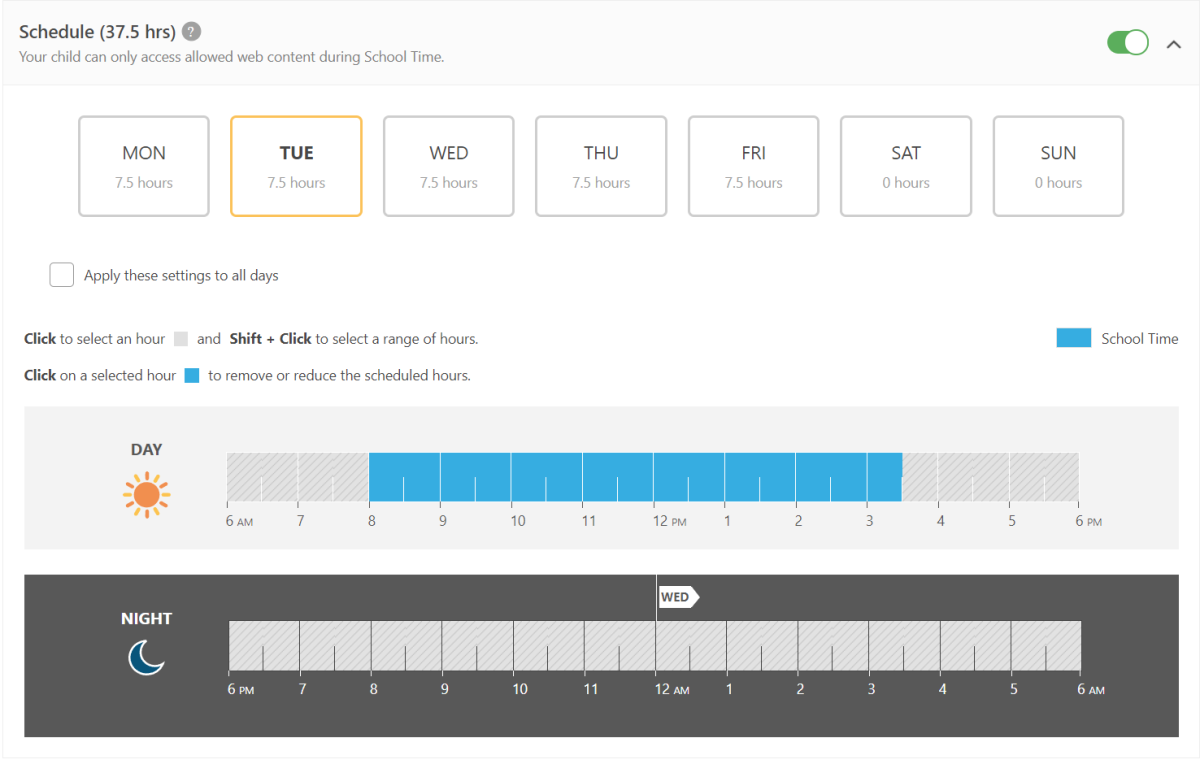 Norton 360 Deluxe also includes some system optimization features such as disk optimization, file cleanup, a startup manager, and a graph showing performance history. You can find a lot of these features in Windows itself or in free third-party programs, but if you're getting Norton 360 anyway it's nice to have all these features there.

The Dark Web Monitoring tool runs off Norton's website and lets you add key information such as a bank account or credit card number, phone number, address, insurance policies, and email accounts. If any of this data shows up in a hacked database on the so-called Dark Web, Norton LifeLock will alert you to it.

I tried testing out Norton 360's parental controls and they were very good. I added a child profile, and then followed the instructions to install the Norton Family App on the test PC to monitor the child user account for Windows 10.

Norton's defaults will monitor the child's account quite aggressively for younger children. All searches are filtered, video and web activities are monitored, and School Time feeds the parent reports about how devices are being used during school hours. Norton has also added device location features, including a new geofencing setting that alerts you if the child's device, presumably with the child, leaves a predefined area. 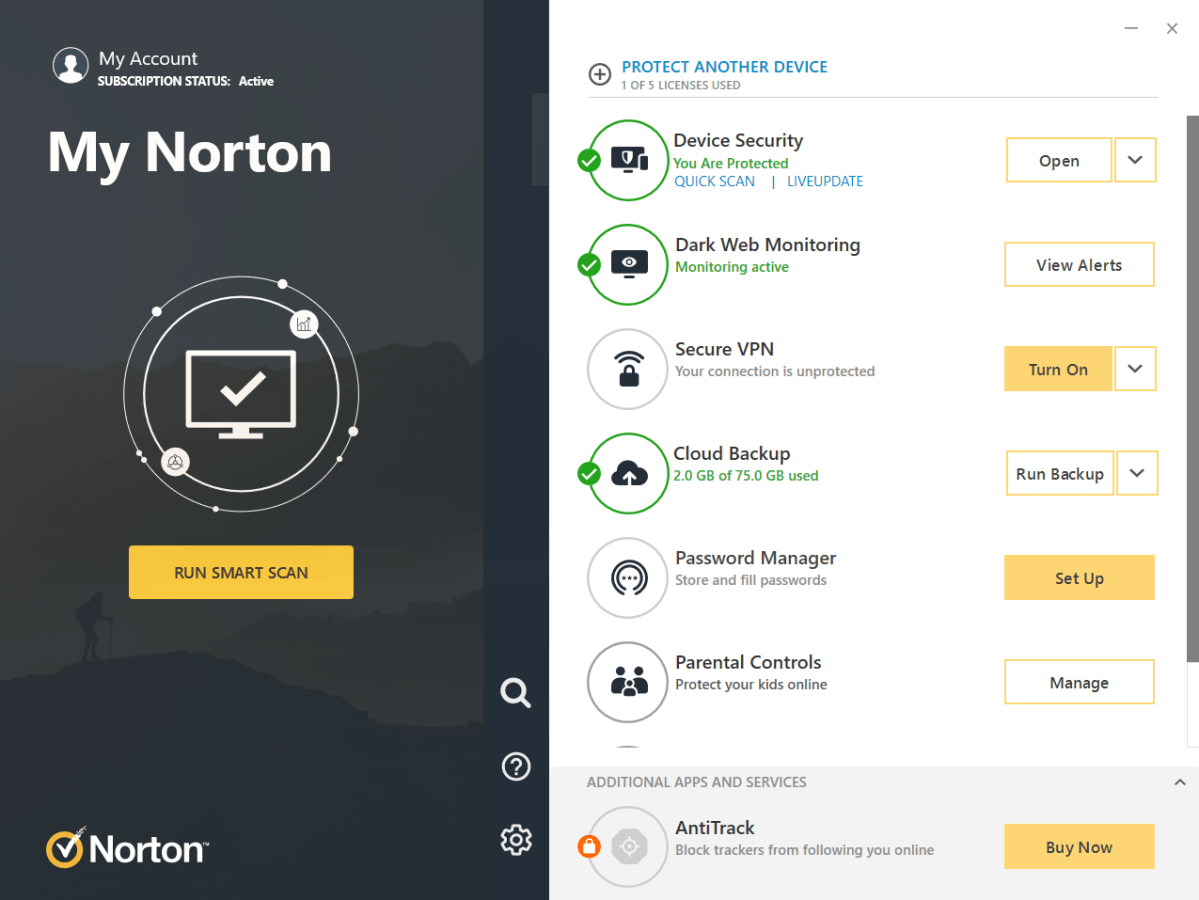 The My Norton app on Windows 10. Image: IDG

To combat the latest threats, Norton has some new anti-malware features. Over the past year, the company has improved its anti-malware scripting interface (AMSI) to improve detection and help restore compromised files; it optimized detection for process hollowing, where malware dumps the code for a legitimate process in memory and inserts malicious code; and it has malicious browser extension removal that observes the behavior of your browser's various add-ons to make sure they behave.

In practical terms, we can see how well Norton is doing with protection by turning to third parties. In AV-Test's round of testing from September and October 2021, Norton 360 scored 100 percent in both months on the zero-day malware attack test, as well as the widespread and prevalent malware test.

For our in-house performance tests, we saw some noticeable changes with Norton 360 installed. The PCMark 10 Creative test dropped by 42 points after averaging the scores of three different runs both before and after Norton was installed. The large file transfer test was about 90 seconds slower with Norton installed; the large archive test was 14 minutes slower (one hour and four minutes versus one hour and eighteen), and extracting all of that archived data took an extra four minutes. The only test that didn't show any significant difference with Norton installed was the Handbrake test.

That tells me that you may see some performance loss while using Norton on a mid-range or lower PC.

Norton 360 Deluxe is a very good suite with a good price. If you're looking for excellent antivirus protection that won't get in your way, and which offers a good number of features, then this is the suite to buy.