Intel said Thursday that it expects to ship more than 4 million discrete Arc GPUs in 2022, launching Arc Alchemist chips for the notebook market this quarter, and desktop graphics cards beginning in the second quarter of this year.

Intel executives also promised something new for 2023: the upcoming Battlemage GPU, which a senior executive called a new class of graphics bridging discrete and integrated GPUs.

Raja Koduri, senior vice president and general manager of the newly minted Accelerated Computing Systems and Graphics (AXG) Group at Intel, said in a recorded presentation that Intel already has more than 50 design wins for the Alchemist lineup, including PC makers as well as add-on card vendors. Koduri spoke in advance of Intel's investor day, with speeches from senior executives scheduled for Thursday afternoon.

Intel's entry into the GPU space has been hotly anticipated, as much for how it might alleviate ongoing supply shortages as anything else. Intel said last year that it plans to launch the Arc brand and Alchemist chips in 2022. Unfortunately, the company still hasn't said when the first notebooks with discrete Alchemist graphics chips inside them will ship. The roadmap, though, is set: notebook graphics in the first quarter, desktop graphics in the second, and workstation graphics in the third. Intel didn't announce specific partnerships with any card vendors, though two featured logos were for Gigabyte and MSI, both of which make graphics cards as well as PCs. 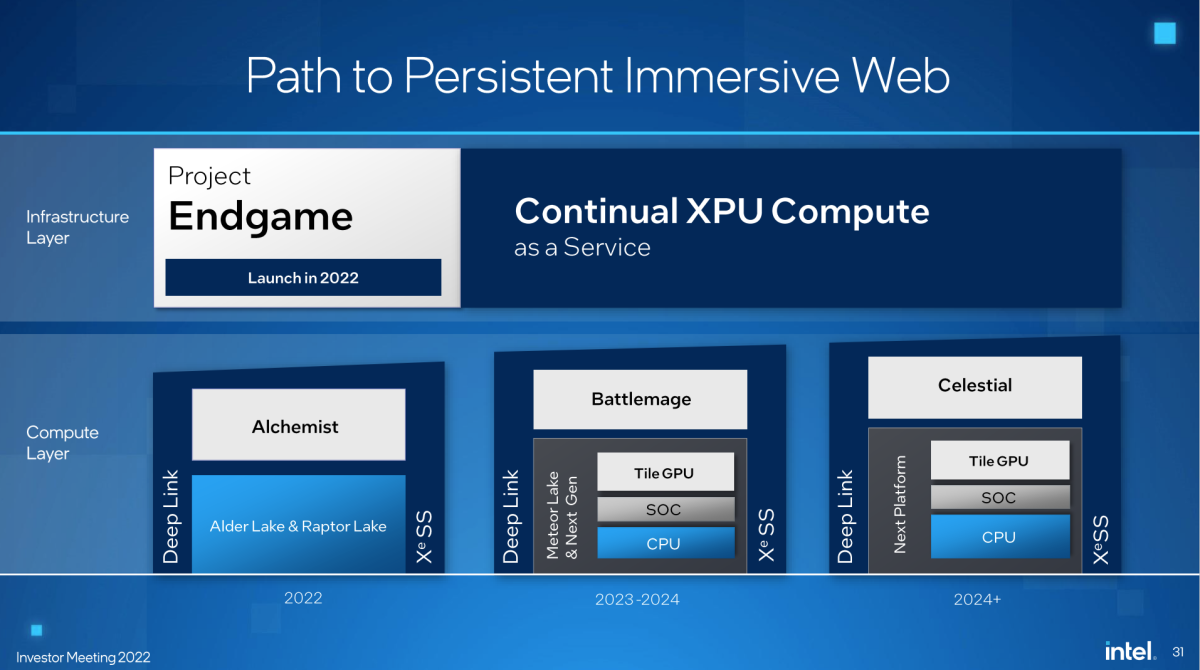 More than 100 software partners also have signed up to use Intel-specific features, such as Xe Super Sampling and Deep Link. The latter, like a similar technology from AMD, promises improved performance when an Alchemist/Xe GPU is paired with an Intel CPU.

Intel will ship the Alchemist chip alongside the Alder Lake and Raptor Lake CPUs this year. It won't be until 2023 that Intel ships Battlemage, which Koduri described as creating a new class of GPUs all the way into enthusiast-class GPUs.

In 2023, Intel will launch the Meteor Lake CPU, which will enable a tiled architecture that will work with Battlemage. This is super exciting, Koduri said. This allows us to offer discrete graphics class performance, with the efficiency of integrated graphics. This is a new class of graphics. You can't really call it integrated or discrete and this is just the beginning of the strategic advantages that this tiled architecture will give us. We will talk more about this in the future.

Intel and AMD have adopted a tiled approach to CPU design to allow them to become more modular by decoupling the GPU and CPU design, separate teams can work on their own projects. Meteor Lake will be the first time that Intel has placed the GPU on its own tile.

If Battlemage is set to deliver enthusiast-class performance, Intel said that work has already begun on Celestial, a product for the ultra-enthusiast segment in 2024 or later, according to Koduri. The goal is performance leadership in every layer, Koduri said.

Koduro also announced one more thing: Project Endgame, a continual XPU compute platform that will launch in 2022. Koduro described Endgame as a software infrastructure platform, and said that it would have more to talk about later this year.

The Accelerated Computing Systems and Graphics Group (AXG) is on track to ship products across its three segments and deliver more than $1 billion in revenue in 2022, Intel said. As a growth engine for Intel, AXG's three segments together will approach $10 billion of revenue for Intel by 2026.