Everyone knows Siri can set a timer or alarm, add a reminder, start a phone call or send a text, or do simple math calculations. But Siri can do so much more!

Apple keeps improving Siri year after year, so if you've gotten in the habit of only using it for a few select things because of your experiences a couple of years ago, you may be surprised by all the things Siri can do quite well today. Give these features a shot, and you may find yourself using Apple's voice assistant a lot more often.

A lot of the basic things you use Siri for today can be modified when you make a more specific Siri request. For example, you can make a call on speakerphone by saying, Call [name] on speaker, or shuffle a playlist by saying, Play on shuffle. Or ask for walking or transit directions specifically if you're not driving. You'd be surprised how many common tasks can be tweaked in useful ways.

Your iPhone does a great job of auto-filling logins and passwords that are stored on the device, but what do you do when you need that password on another device? You can ask Siri for a password (e.g. What's my Reddit password?) and your iPhone will authenticate with Face ID or Touch ID, and open Settings Passwords directly to the entry for that site. This is especially helpful if you have a note stored on the password for things like challenge questions. 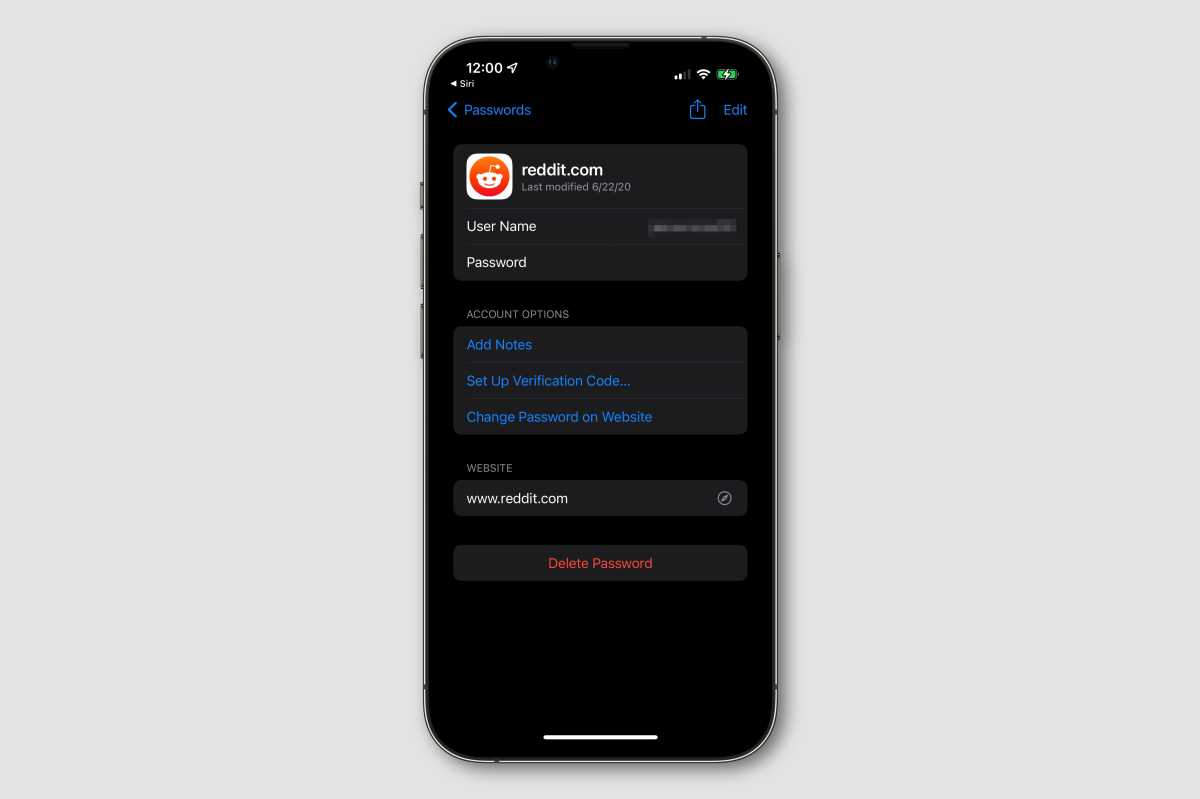 Of course, Siri can answer simple math questions (and even pretty complicated ones), but it's especially useful for calculating tips. Say something like, What's an 18 percent tip on 67 dollars and 52 cents? and you'll get a nice card breaking down the math. You can follow that up with, Split the bill three ways or the like, and you'll get the amount each person owes (along with a fairly useless response about how much the tip is per person). 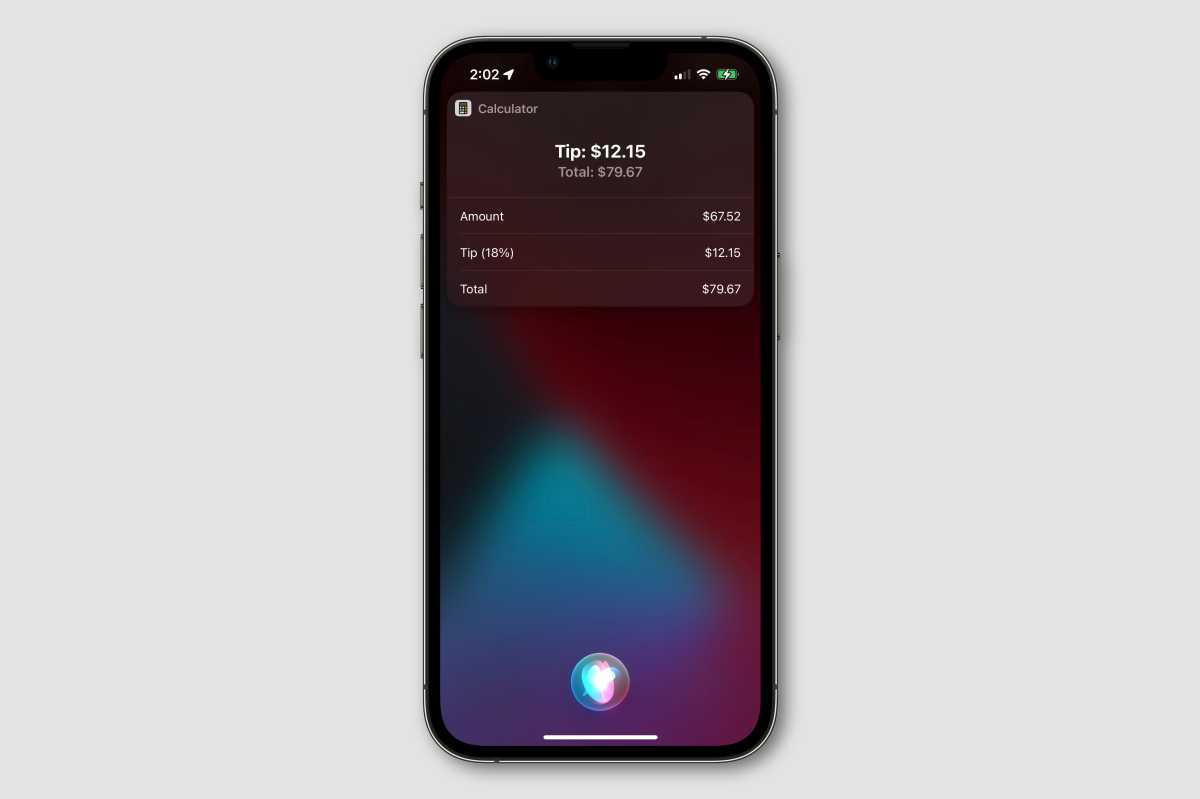 A lot of iPhone users don't realize that Siri can control common device settings. This can be a lot easier than fumbling around to find them in Settings or even Control Center. You can tell Siri to turn Wi-Fi or Bluetooth on or off, turn on or off airplane mode, turn on the flashlight, adjust brightness, adjust volume, enable or disable Night Shift, enable or disable Dark Mode, and more. For features like brightness or volume, you can give absolute directions (e.g. Change the volume to 70 percent) or proportional ones (e.g. Make the volume quieter).

Snooze or turn off an alarm

We all know you can use Siri to set an alarm, but not many think to use it to end one. You can tell Siri to snooze your alarm or end it, which can be easier than fumbling around sleepy without your glasses and trying to find the button.

Flip a coin, roll a dice, even consult a Magic 8 Ball

Siri's great for making unbiased decisions! Don't know whether to get tacos or burgers? Tell Siri to flip a coin. Siri can also roll dice, even uncommon dice (roll a d20). You can tell Siri to roll two dice, and it will give a funny response as though it's gambling.

Finally, Siri has a Magic 8 Ball built in. Just say Magic 8 Ball and you'll get one of 20 responses that roughly correlate to the original Magic 8 Ball. Will you try it? Signs point to yes. 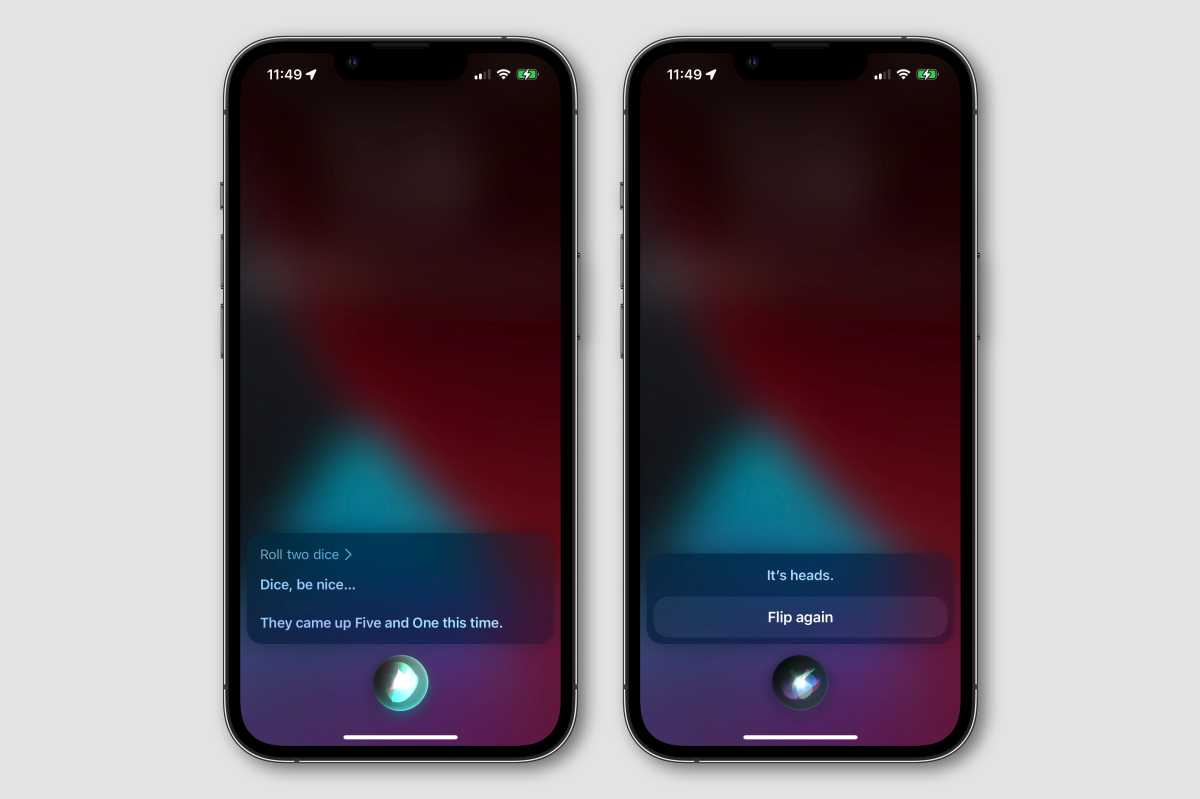 Identify an airplane flying above you

Have you ever looked up and wondered exactly what plane is streaking across the sky? You can ask Siri which planes are overhead, and get a list through its partnership with Wolfram Alpha. It only covers commercial flights, but you'll get a couple of handy charts showing the flight, plane type, altitude, and angle relative to your position. 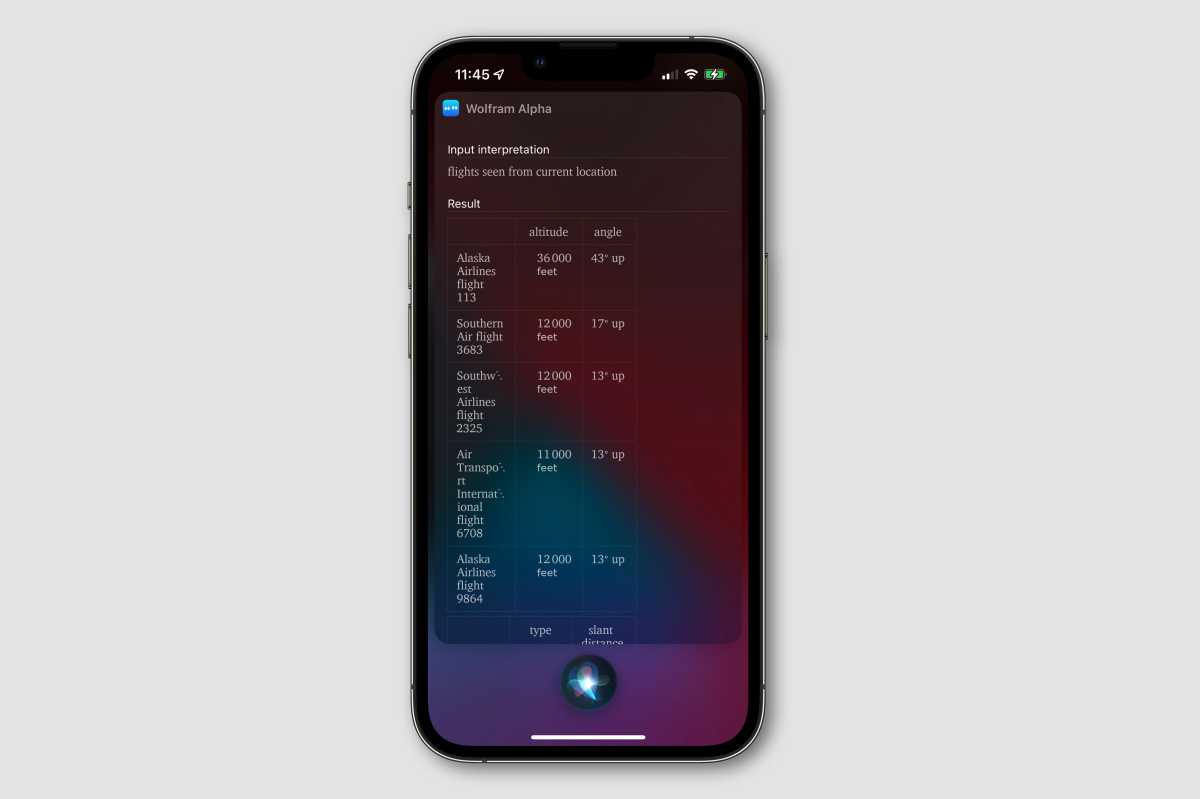 Ever find an iPhone and not sure what to do with it? Start by asking Siri whose phone it is. If they have a Me contact (most people do), Siri will tell you their name and might even pop up a limited contact card. If the phone is locked there may not be a lot you can do, but knowing the name will really help whoever is in charge of lost and found.

Choose a nickname for yourself

Speaking of names, you don't have to settle for Siri using your real one. Just say, Hey Siri, call me by a nickname and it will prompt you for one. It can be nearly anything you want. This gets added to the Nickname field of your contact card, in case you want to change or delete it later. 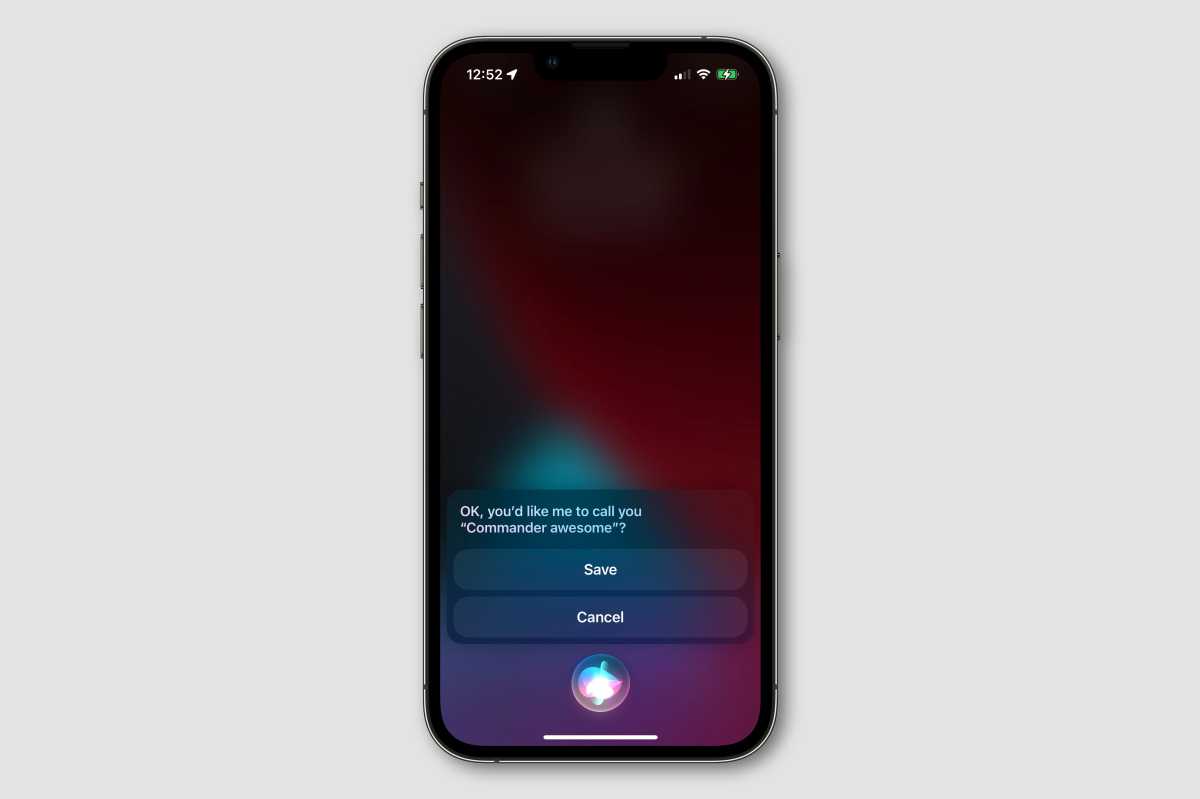 Apple bought the music-identification app Shazam back in 2018, and while you can still download the app and it's great in a lot of ways, you no longer need it to simply identify a song you hear. Simply ask Siri what song is this? and it'll listen for a few seconds and give you the answer. It's really pretty accurate.

Siri can find anyone who shares their location with you in the Find My app. Just say, Hey Siri, where's [name] and you'll get a pop-up card with a map. 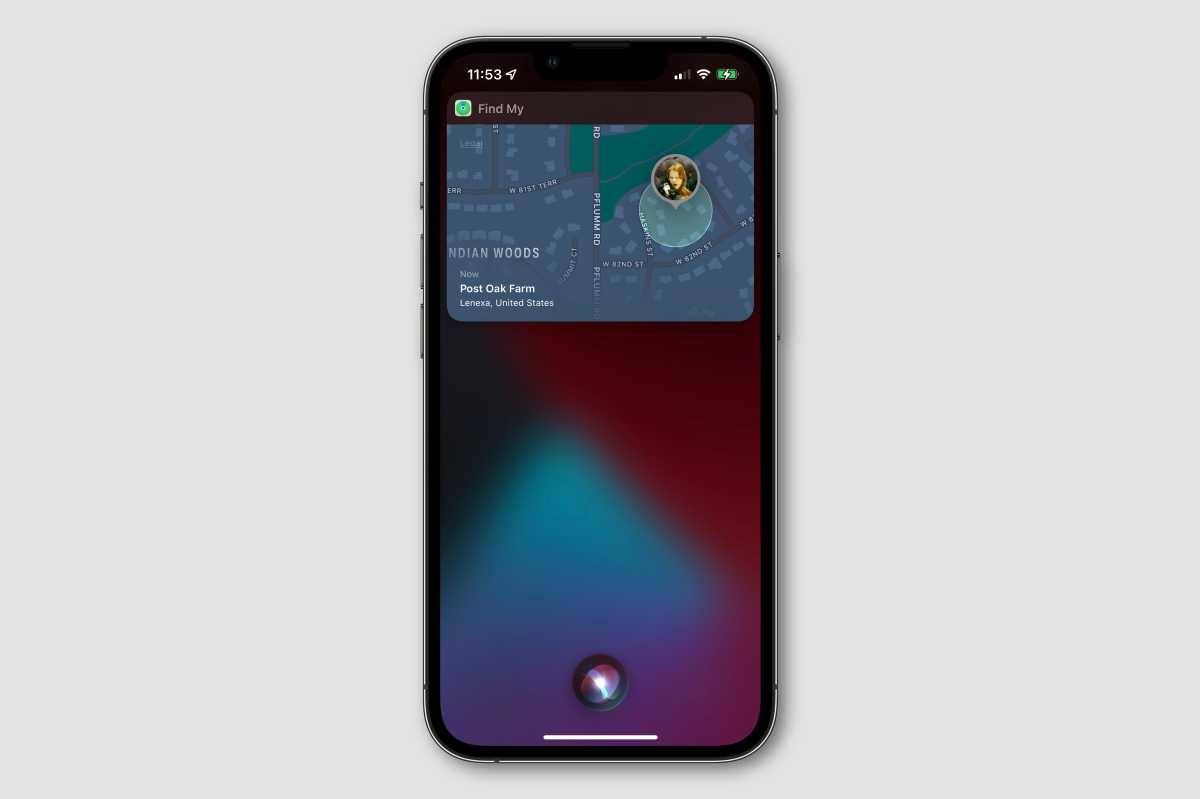 Now, where did you leave your Apple Watch? Siri can help you find any of your devices and will make them play a sound if nearby so you can locate them. This is especially handy if you have a HomePod or other Apple device and are constantly setting your iPhone down somewhere and forgetting about it.

Remember where you parked

If you attach your iPhone to your car via CarPlay, and sometimes even if you're just driving around and your iPhone determines that you're driving from its motion sensors, you'll often find it automatically remembers where you parked.

But it's not foolproof, and it's useful to know that you can trigger this manually, too. Just say, Hey Siri, remember where I parked and Siri will annotate the map with your parking location. You can find the icon in the Maps app and delete it there, or tell Siri to forget where you parked. Hey Siri, take my to my car or similar phrases will pop up walking directions right to your parking spot within about 10 meters or so.

It's the perfect thing for really big parking lots, like at shopping centers and amusement parks.