Apple's addition of Live Text to iOS, iPadOS, and macOS last year lets you treat bitmapped text in images almost like letters and words. In macOS, click on an image in Preview, Safari, and other apps, and you can select the text and copy it or translate it, open URLs, and send email.

But Live Text only goes so far. It works only for images you can open or select and requires macOS 12 Monterey for Mac users. If you're using an older version of macOS, or don't want to make screen captures and open them in Preview to grab text—among other workarounds—turn to TextSniper.

This single-purpose app provides text recognition of a quality that, in my testing, matches Live Text while letting you make a selection anywhere on your Mac screens. Its accuracy in recognizing both ideal and difficult text ranks it higher than several other companies' products, including Adobe Acrobat and Google Docs. It's comparable to Live Text, PDFpen, and Microsoft OneNote, and only Live Text is optimized for quick, ad hoc recognition. (You can see full results in our July 2021 head-to-head comparison.) 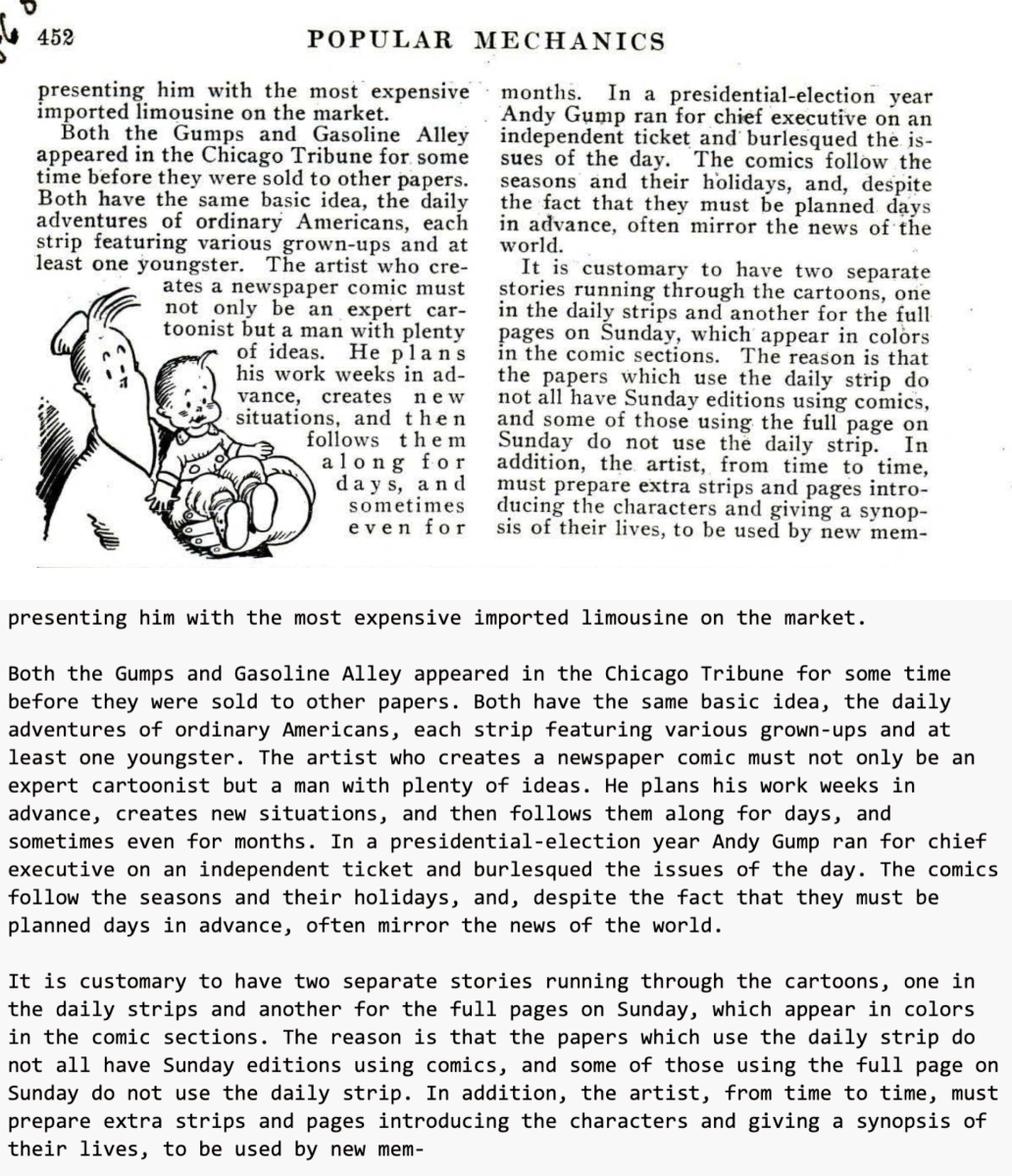 TextSniper's text extraction rivals or exceeds that of some trillion-dollar companies. Here, I had TextSniper extract while removing line endings. It correctly identified and removed word-breaking hyphens and the end of paragraphs.

Simply press TextSniper's keyboard shortcut (Command-Shift-2) or choose Capture Text from its menu and draw a rectangle around the portion of the screen you want to extract as text. That shortcut can be changed via the app's preferences, where you can also set keystrokes to toggle or invoke various of its features.

This capture approach can be generally useful even for those running Monterey. Live Text doesn't recognize everything and requires a click to invoke and then sometimes a little effort to find where the feature believes text starts. Live Text often fails to let you select all of a text passage where the algorithm doesn't recognize it as contiguous.

TextSniper doesn't have a problem with tilted, rotating, or shadowed text as long as it fits into a rectangle. (Live Text automatically identifies text and at any angle.) However, I found in testing that rotated text sometimes causes TextSniper to swap a line or two, potentially to do with how it recognizes the start of a line. 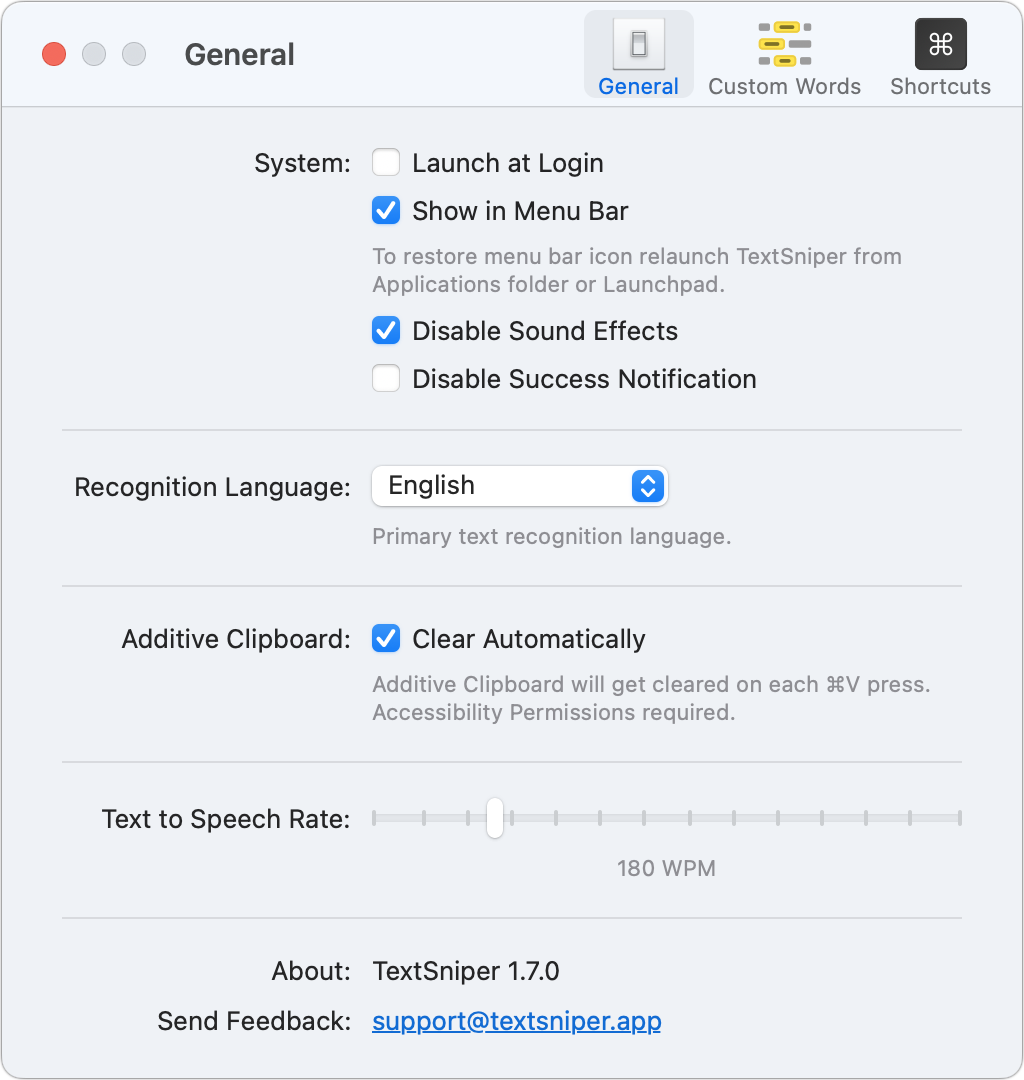 You can pick a language, enable the additive clipboard, and adjust text-to-speech's speaking rate in preferences.

Capturing a portion of the screen copies extracted text to the Clipboard. You can optionally enable or disable removing line breaks, allowing TextSniper to attempt to stitch the text together into paragraphs or longer runs. You can also turn on Text to Speech, and TextSniper will read aloud its results as soon as you release your capture.

For text that can't be easily captured in a single selection, you can enable an additive clipboard. Each subsequent capture appends additional extracted text until you paste the Clipboard's contents or reset it. This can help with one of TextSniper's few failings compared to Apple's recognition: Live Text identifies columns of text and creates a selection as you drag within each column. TextSniper only identifies lines of text. The additive clipboard overcomes that.

But even though Apple's Live Text is clever about columns, the text it copies is always a line at a time—there's no option to run lines in paragraphs together. That's an option in TextSniper. When enabled, the app accurately recognizes most paragraph ends and removes hyphens automatically for words divided across a line.

The app supports macOS's option to take a photo via an iPhone or iPad logged into the same iCloud account, letting you extend extraction to text that's not onscreen.

If you use certain words routinely that aren't part of more general language usage, you can add them as a long list in the Custom Words portion of the app's preferences. There's no facility to provide feedback about recognition within the app—it won't learn from corrections you might make, for instance.

TextSniper also recognizes and decodes QR codes and standard barcodes—a handy feature, as Apple doesn't process encoded data except in a limited case. (That scenario? When enrolling in two-factor authentication and adding the shared secret as a QR code.) To turn these codes into numbers and text you have to enable a separate keyboard shortcut. Text to Speech can read extracted barcodes and information in a QR code aloud.

The app can extract text from several languages when used with macOS 11 Big Sur or 12 Monterey: English, French, German, Italian, Portuguese, Spanish, and traditional and simplified Chinese. When used with macOS 10.15 Catalina, it supports just English. The app can be purchased directly from the developer for $7.99 for a single Mac, or $9.99 for a license that covers three Macs. When bought from the Mac App Store, it may be used with unlimited Macs and by Family Sharing group members. The app is also part of the Setapp subscription software library.

While Live Text is the best thing since sliced bread, profoundly transforming our interactions with text. However, Live Text is a bit like a tasty supermarket-brand loaf: it does the job, and not badly at that, but it's not all you might expect. TextSniper, in that analogy, is more like a finely baked fresh baguette: crisp and near perfection. If you find Live Text can't keep up with your needs, TextSniper fills in nooks and crannies and expands beyond Live Text's strong but basic intent.

With the strong resurgence of the Mac in recent years, we want to celebrate the tools we use and that readers recommend to make the most of your macOS experience. Mac Gems highlights great nuggets of Mac software, apps that have a high utility, have a sharp focus on a limited set of problems to solve, and are generally developed by an individual or small company. Stay tuned for weekly updates, and send your suggestions to the Mac Gems Twitter feed (@macgems).