When PC gamers think of cloud gaming, they typically think of GeForce Now—the game streaming service that leverages Nvidia servers so that even users with modest systems can play PC games on the cloud. But there are several other big players in the cloud gaming market such as Amazon Luna. Let's see how the service shakes out.

Amazon Luna is a cloud-gaming subscription service that gives you access to various games, all played on an Amazon server somewhere and streamed to your device. The subscription plans are split up into channels, each featuring a particular selection of games to enjoy. Every channel has its own theme and price and you can be subscribed to multiple channels at the same time. Channel offerings and their prices are based on what is available in the United States. 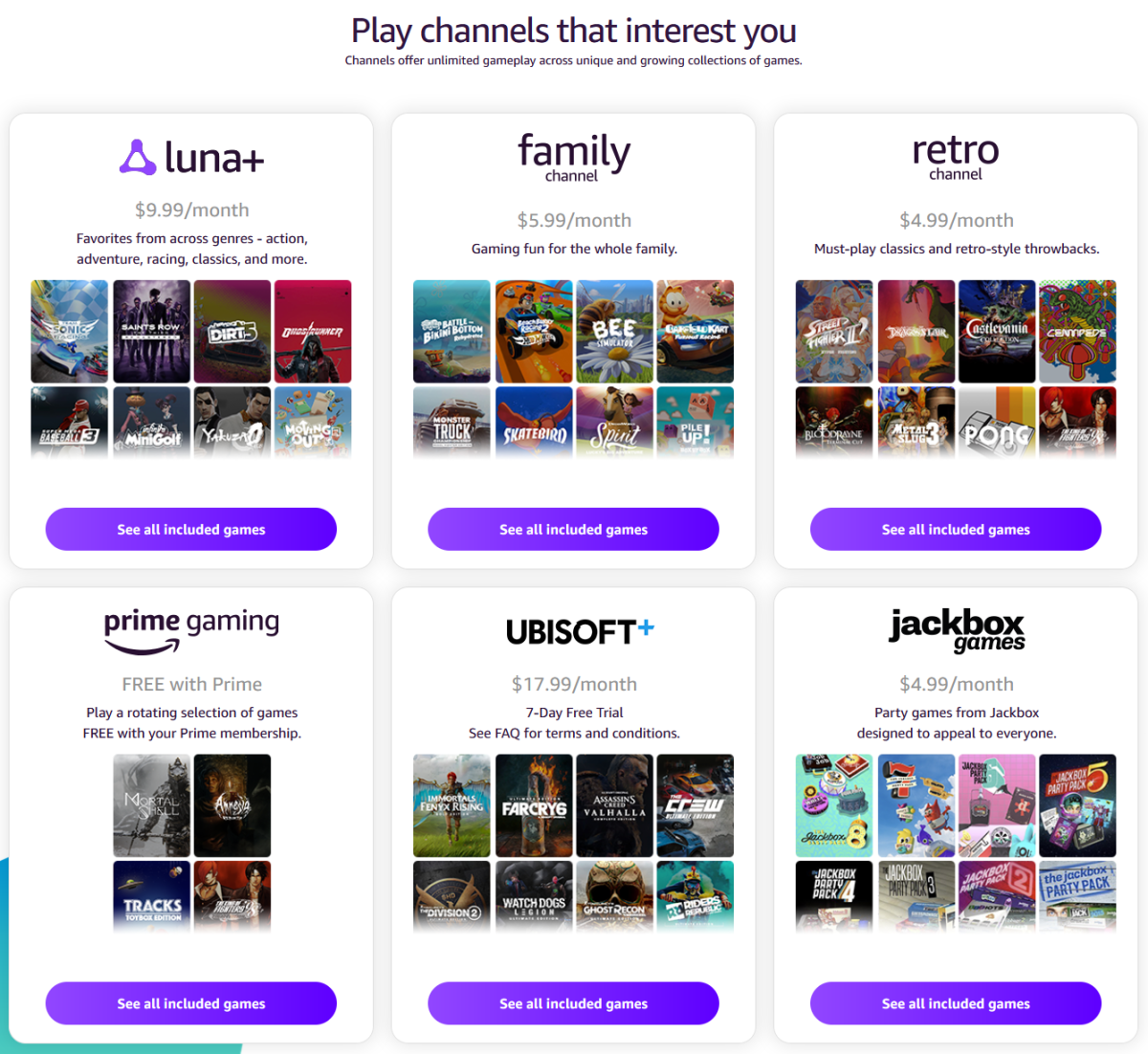 The primary service channel is called Luna+ and it includes a variety of games from all sorts of genres and styles. For $9.99/month, you can stream games like Devil May Cry 5, Grid, Sonic Mania Plus, and River City Girls, and more. I'll dive deeper into the game library below.

At $5.99/month, the Family channel offers solo and multiplayer games that are rated E and E10+, intended to be safe for the whole family to play.

The Retro channel offers games from the early arcade days to a few PlayStation 2 titles. For $5.99/month, this Luna channel gives access to classic Centipede, Missile Command, and more recent games like King of Fighters 2002 and remakes of Bloodrayne.

The Jackbox Games channel brings access to all of the Jackbox party pack games for US$4.99/month, which frankly, is an incredible deal if you're looking for an option to play these games with a group of friends once in a while.

Finally, Amazon Luna is one of the cloud gaming services that supports the US$17.99/month multi-access plan from Ubisoft+, which gives access to over 100 Ubisoft titles on your own device or streamed through a service like Amazon Luna or Google Stadia.

Frankly, Amazon Luna's game library is okay. There are some very specific niches the service provides access to that can be valuable to some people, but overall, the game selection on Amazon Luna is just okay.

The biggest drawback to Amazon Luna's game library, regardless of channel, is that it doesn't offer many new games, and the new games that are offered aren't the usual big hits that gamers are spending a lot of time on. That said, the game offerings within each channel are generally quite charming. 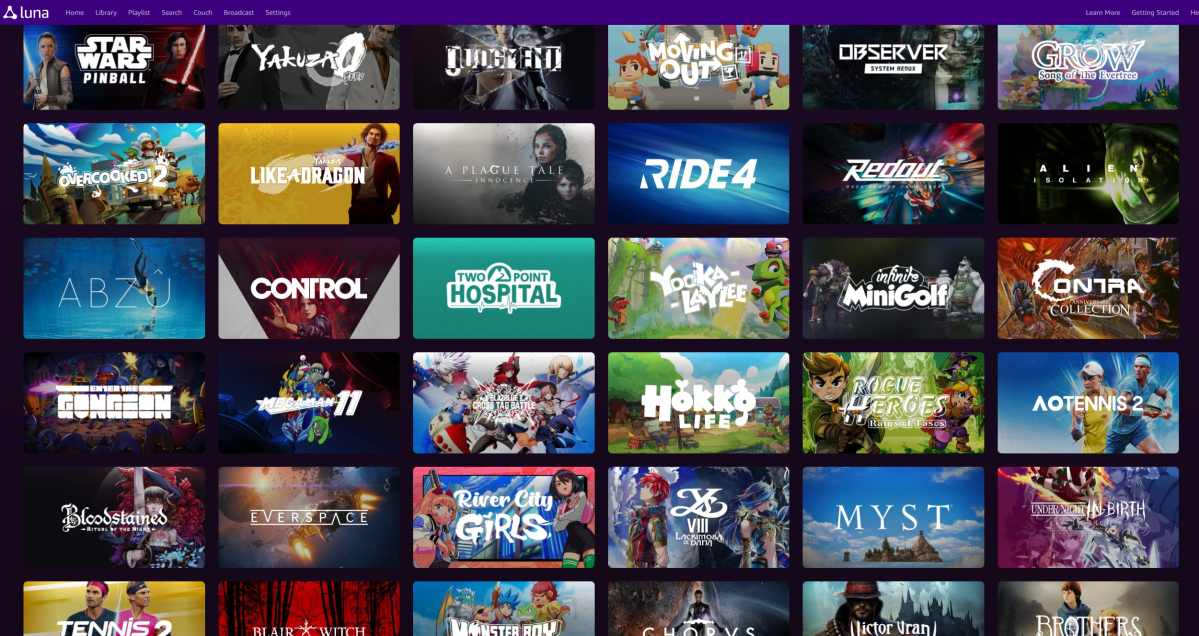 The Luna+ channel has the biggest variety of games—and it does include some absolute gems. Games like A Plague Tale, Alien Isolation, and Gris stand out as well-regarded games from a few years ago. If you haven't played the games offered in Luna+ before, there is definitely a lot of worthwhile content to check out that you might have missed in the past. Luna+ is the channel to pick if you're just looking to play some good games with Amazon Luna.

The rest of the channels have more specific goals and targets. The Family channel can be a good place to hop in for kids and parents to play together on accessible devices without worrying about questionable content, while also offering some familiar brands from other media, such as DreamWorks, Hot Wheels, and Transformers.

The Retro channel is good for two things: nostalgia and history. Whether you want to introduce someone to the 1981 classic Tempest or relive the adventures of Dirk the Daring in Dragon's Lair, the Retro channel hits those specific nails on the head. From arcade and Atari classics, to the Castlevania Anniversary Collection, to the Capcom Arcade Stadium selection, the Retro channel has a solid selection of non-Nintendo games.

As stated above, the Jackbox Games channel is actually an incredible deal, whether you're playing those games regularly or not. The channel gives access to every Jackbox Party Pack game plus the standalone Drawful 2. For the casual experience, it means being able to drop $5 a month to play together once in a while. For the more familiar fans, no more having to worry about someone having the right Jackbox Party Pack for the specific game you want to play, since this gives access to all of them.

The Ubisoft+ channel/service isn't something I'm going to go too deep into for this review, as it's not an Amazon Luna–specific service. It is worth noting that if you're into Ubisoft's games, like the Assassin's Creed or Far Cry games, then this service can be worth it, especially if you don't have a PC to handle things like Far Cry 6 or Assassin's Creed Valhalla.

Amazon Luna's overall user experience knocks it out of the park. I had a hard time finding any real problems with the interface. Signing up is very smooth and straightforward, especially if you already have an Amazon account of any kind that you'd like to connect it to. Once logged in, you can use Chrome, Edge, or the standalone Amazon Luna app to pick through your game library. From there, you simply select a game, press Play, and it launches in full-screen mode on your device.

For organizing the games library, both the website and app libraries allow you to filter games by genre, single or multiplayer variations, or by Luna channel. You can also sort by alphabetical order, release date of the game, when it was added to Luna, and even Metacritic rating. You can add games to a playlist to keep track of or simply search a game by name, genre, or developer.

A handful of games include a feature called Luna Couch, which allows a Luna subscriber to set up a game and provide a code to a friend to join the action, even if the friend does not have an active Luna subscription. The Luna Couch feature is pretty common too, with games like Overcooked, Rogue Heroes, the Jackbox Party Pack games, and many of the retro channel's games being supported.

There are a couple of games that do not support a mouse and keyboard, and if that's the case, Luna will warn you when you try to launch such a game. It will prevent the game launch if a controller isn't detected on your device, but this seems to be more of an issue for specific games as opposed to the overall service itself. Amazon Luna advertises compatibility with Xbox One, DualShock4, Razer Kishi Mobile, and its own Luna controller. I can confirm the Xbox One controller works well.

Lastly, being an Amazon gaming service, you can connect Luna to your Twitch account to broadcast your gameplay on your Twitch channel through the Luna platform. In this setup, you'll be able to feed your webcam and microphone capture through the web browser, so you can include video and voice for your stream as well.

Simply put: great. Both the browser and standalone app experience were exceptionally smooth with our tested connection. In some earlier testing, I did find the Chrome browser experience to be best, but with some more recent updates, it seems Amazon Luna's performance has become more consistent between the browser and app.

Amazon recommends a 10Mbps connection for 1080p game streaming quality. It also recommends either a wired connection or a 5GHz wireless band for connection stability. Our testing connection is 400Mbps down, 25Mbps up for the sake of this review.

One of the first games I tested was Enter the Gungeon, as it's a fairly quick and reactive game to play and can reveal whether the controls feel tight and responsive—and Luna succeeded at this test. There may be just barely enough latency for the most well-practiced of fighting game fans playing in the Retro channel's Street Fighter II to worry about, but for almost everyone else, input lag isn't likely to be noticeable. 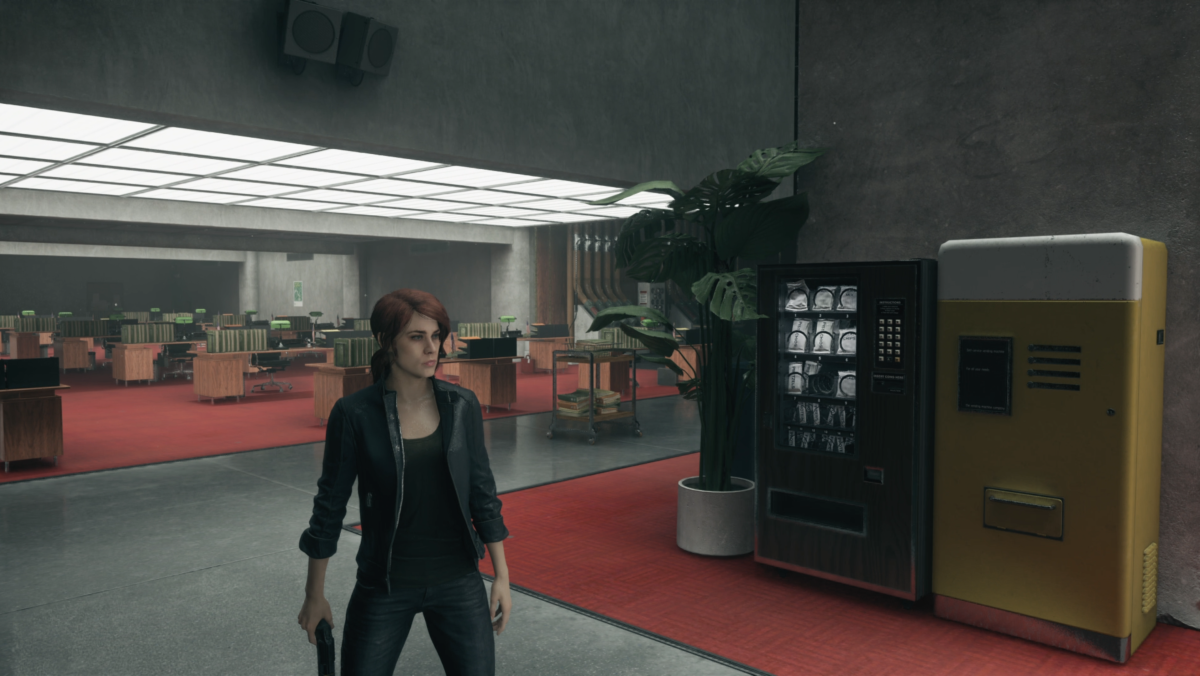 I tested all kinds of games for visual quality and gameplay feel and nothing felt or looked too bad. Control looked as good as it could in 1080p, Bloodstained Ritual of the Night felt smooth and responsive, and there I saw no visual artifacting no matter how many explosions I set off in Saints Row the Third Remastered. Sound also came through clear and in-sync with what I was seeing.

None of the Luna-provided games I tested had any video options of any kind. It looks like the games being run on Luna have a preset graphics setting that can't be changed, and games that would have those settings in their options menu seem to have them removed. If you're looking for anything more than the 1080p 60fps experience, it doesn't look like Luna is going to be your pick.

Amazon Luna is a smooth, simple cloud gaming platform with a straightforward experience and quality performance as long as your internet connection can keep up. The different channels can add up in costs, but they certainly deliver on some very specific niches alongside an okay games library.