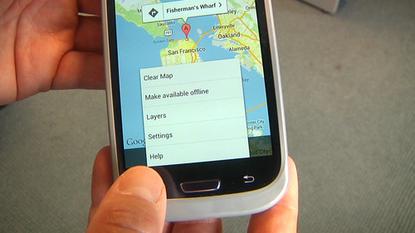 When traveling to places with unreliable reception, consider saving an offline version of Google Maps. This can also be helpful when traveling abroad with expensive roaming rates.

Saving a destination in Google Maps makes it easier to navigate to and also lessens the chance for error when entering or trying to remember an address.

To see a step-by-step guide of this Tech Tip, watch a video on YouTube.

Destinations can be starred from a mobile device running Google Maps or from the Web. After searching for an address or location, click on the pin for the destination and switch on the star icon. Starred destinations will be synched across all Google accounts and devices. Starred destinations are easier to find and will type ahead on both mobile and desktop versions of Google Maps. Starring locations is a good idea for local errands and for vacations and business trips to other states and countries.

When traveling to a place with unreliable mobile data reception or expensive data rates, it's also a good idea to save an offline version of Google Maps. Once in the application on a mobile device, press the options button and select "make available offline." Pan and zoom the map until the area to be downloaded is highlighted. Click "done" and the map will be downloaded to the mobile device and be able to be used when mobile data isn't available.

Nick Barber covers general technology news in both text and video for IDG News Service. E-mail him at Nick_Barber@idg.com and follow him on Twitter at @nickjb.