Acer K242HYL review: An affordable monitor for any occasion 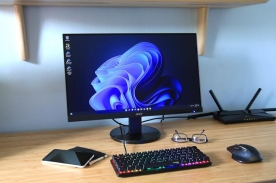 At this price, you expect to make some compromises. Acer does a good job of hitting the features that matter the most, with good image quality and motion response, as well as tossing in a few surprise extras like a 75Hz refresh rate and FreeSync support.

The budget monitor market is difficult to grasp. This isn't because of the technology, which is easy to understand, but the sheer wealth of options. You can find hundreds of monitors with a 24-inch, 1080p display for between US$100 and US$200 . Acer's K242HYL is one such example, but its image quality nudges ahead of the pack.

The Acer K242HYL is a typical 24-inch, 1080p monitor save for a few notable specifications. These include a 75Hz maximum refresh rate, rather than 60Hz, and support for AMD FreeSync. Around back you'll find a VGA port and just one HDMI port.

Pricing is competitive at US$149.99 (AU$249), in line with, or slightly undercutting, alternatives like the HP 24mh and Samsung CF396. Sceptre is the only brand that consistently beats Acer on price, and only by a few dollars. This sets a low bar the Acer K242HYL easily clears.

Uninspired design is not surprising in any budget monitor, and the Acer K242HYL places as little emphasis on looks as possible. The monitor has slim bezels on three sides and a chin on the bottom. This chin provides room for the Acer logo and on-screen menu controls. Around back you'll find an expanse of matte-black plastic with few ridges and another Acer logo. It's not much but, at this price, avoiding offense is the goal, and the K242HYL manages that. 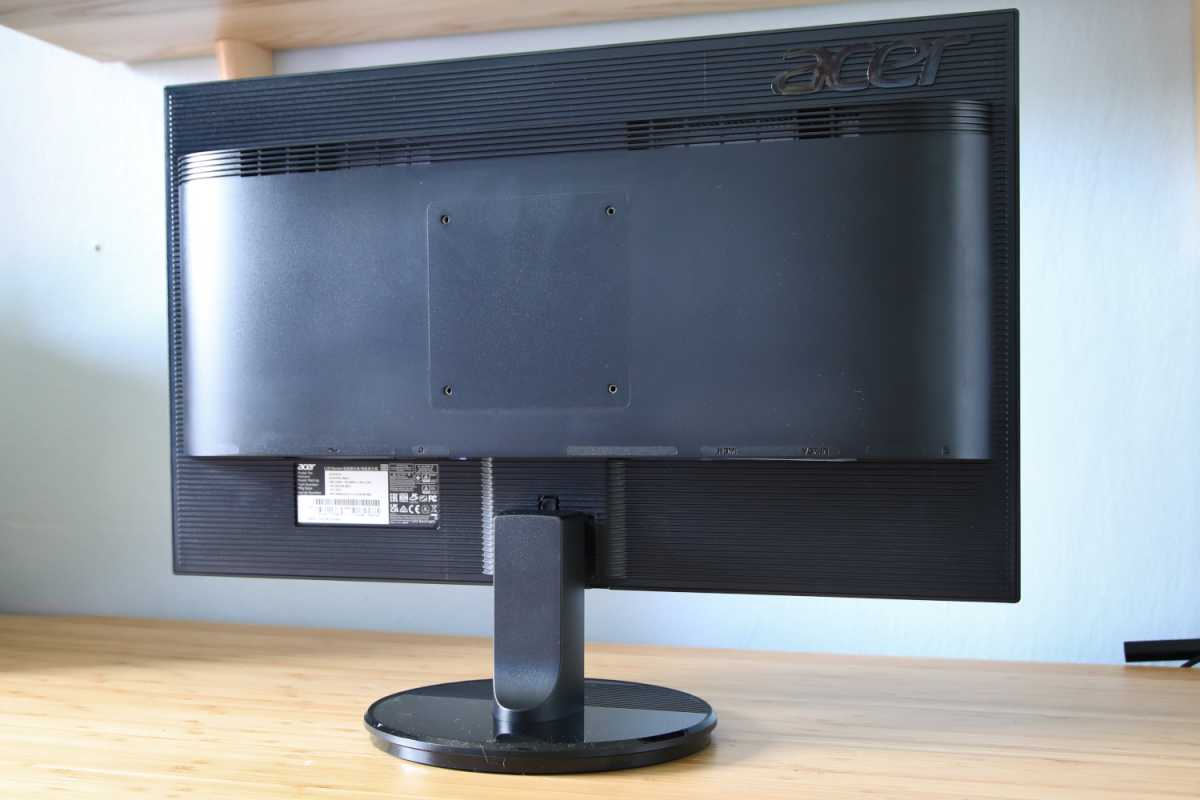 The small included stand clips on the bottom of the monitor. Tilt is the only adjustment offered and the stand's default height will be far too low for users around 6 feet tall or taller. The lack of adjustment is disappointing but standard at this price point. A 100x100mm VESA mount is included, at least, so a third-party monitor stand can solve the monitor's ergonomic issues for tall users. Or you can place the included stand on a platform.

My only serious complaint with the K242HYL's design is minor, but not trivial. The power LED, which faces forward, is too bright and distracting in a dark room. I found no option to turn it off in the menu, so I covered it with a piece of electrical tape.

The Acer K242HYL has just two video inputs: one VGA and one HDMI. The inclusion of VGA might be a perk for those with older computers who need a modern display.

The lone HDMI input is an issue. The monitor essentially has one input for most users because modern devices can't easily connect to VGA. Many competitors to the Acer, like HP's 24mh and Scepter's E248W, offer an additional input.

There's better news in the menu system. The Acer K242HYL, like all budget monitors, is slim on image adjustments, but a few stand out. It offers several gamma presets and color temperature presets that are effective in adjusting the display's picture. There's also a custom color mode for more fine-grain color adjustments. These options are easy to find because the menus are well labeled.

The K242HYL doesn't have speakers or USB-out and doesn't support HDR. I missed these features, especially the USB ports, but their absence is typical for the budget category.

No one expects great image quality from a budget monitor, but I'd argue this makes image quality even more important. Any US$500 monitor can offer a quality picture. The same is not true below US$200. Fortunately, Acer's K242HYL is among the better monitors in the budget arena. 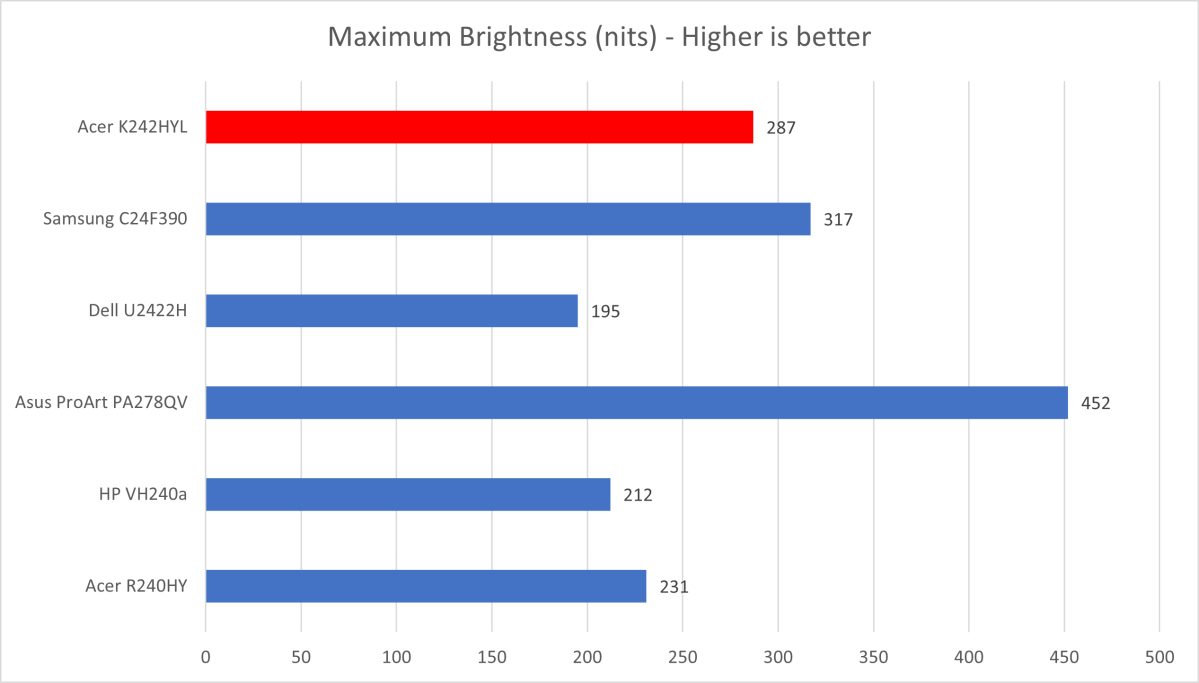 The Acer K242HYL compares favorably against its peers in brightness.

Brightness comes in at a maximum of 287 nits, an above-average result for this category. Many competitors are closer to 200 nits. This means the Acer K242HYL can appear bright and vivid even when used in a bright sunlit room with no blinds or curtains. In my office, which has some light control, I set the monitor at just 60 percent of its maximum. 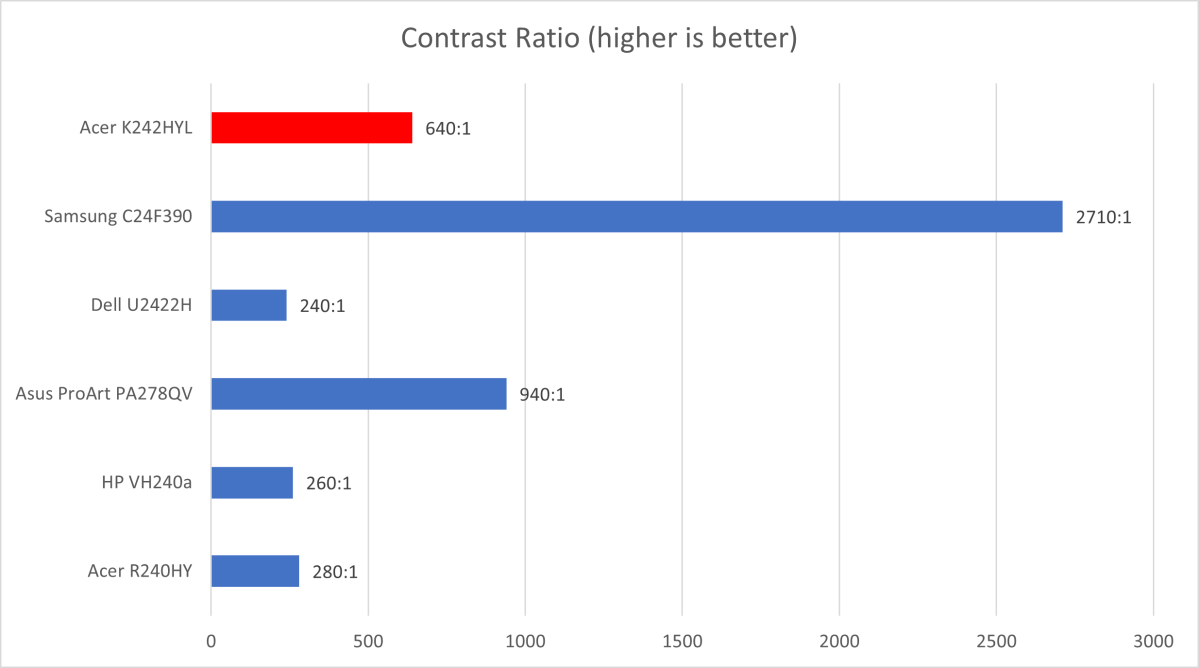 It also features a decent contrast ratio, although not the best for movies.

The K242HYL delivered a respectable contrast ratio of 640:1. While not amazing, this is better than what you'll find in the least-capable budget monitors on the market and avoids a hazy, dour look. The lack of depth is noticeable in movies and games, however, making this content less immersive. Samsung's CF390 series is a better choice for entertainment though, as I'll detail later, but has its own issues in games.

Color gamut is respectable at 98 percent of sRGB and 78 percent of DCI-P3. This sets a better baseline than alternatives that have a more narrow sRGB gamut. In particular, it helps the monitor display clear and even colors with less banding than many in this category. 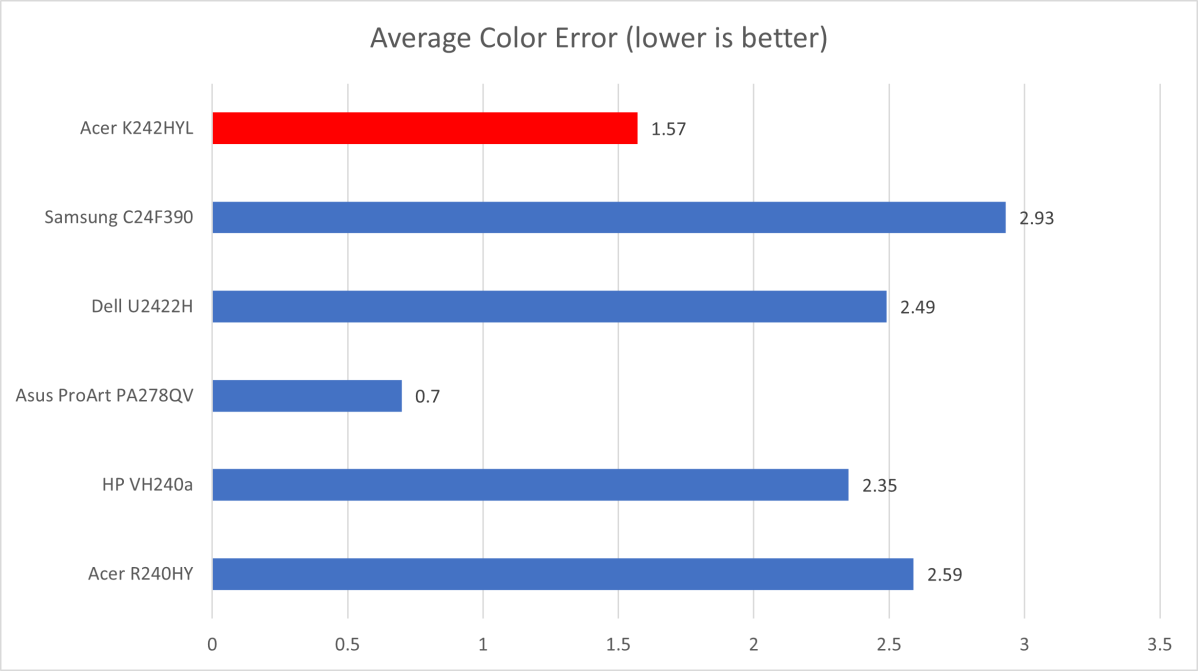 When it comes to color accuracy, the K242HYL is second only to the Asus ProArt monitor, which is twice as expensive. Image: Matt Smith / Foundry

Color accuracy is extremely good with an average color error of 1.57. This beats every monitor I used for comparison except the Asus ProArt, which targets color accuracy as a key feature (and is at least US$150 more expensive).

Despite good results in tests, I was a bit disappointed in the Acer K242HYL's image out of the box. The image seemed warm and musty. As the tests indicated it could do better, I tried bumping the gamma setting to its maximum (2.4) and turning the color temperature from the default (warm) to normal. These tweaks fixed my complaints.

This is a 24-inch, 1080p monitor with a pixel density of about 92 pixels per inch. That's standard for a monitor in this category but a bit low for monitors overall. Despite this, the monitor looks reasonably sharp and provides decent text clarity. A 1440p monitor is better, yes, but I had no problem using the monitor to write in Word or edit spreadsheets.

On balance, the K242HYL has solid image quality for its price. The monitor's high brightness, decent color gamut, and good color accuracy make for a realistic and lifelike image. It lacks the flair or drama of more expensive monitors but is enjoyable enough day-to-day.

The K242HYL is not sold as a gaming monitor but does offer two features of use to gamers. It's compatible with AMD FreeSync and has a 75Hz refresh rate. However, it did not function with G-Sync on the Nvidia-powered desktop used for testing. That was disappointing.

With a pixel response time of 4ms, motion clarity is good for a monitor in this price range. It's nowhere near as crisp as a 144Hz IPS gaming monitor but it lacks the more serious ghosting and smearing issues that can be a problem in the budget space. Samsung's CF390, for example, has better overall image quality. But that line of monitors often has significant pixel response time issues in dark content which can cause an unsightly smear behind objects.

It helps that the K242HYL has above-average image quality for its price. The monitor's accurate color and high brightness provide punch to games. Vivid, bright games like Overwatch or Valorant look especially good, as these rely less on contrast to look their best.

The Acer K242HYL is an easy monitor to recommend for budget shoppers. It's not impressive—nothing in this price range is—but it's attractive enough and didn't fall flat in any scenario. That makes it a safe bet.