The Dell U3223QE looks like any past Dell Ultrasharp monitor. But this one has a trick up its sleeve: It's among the first monitors to use LG's new IPS Black panel technology. IPS Black is a new iteration of IPS panel tech that promises to boost contrast by lowering the deepest, darkest shade of black the panel can achieve.

The Dell U3223QE is part of the company's Ultrasharp line of business and professional monitors. Ultrasharp is not the very best Dell offers in this field—that honor goes to Dell's far less common Ultrasharp PremierColor line—but it's a high-end display by most metrics. It has a 31.5-inch, 4K panel that promises to deliver up to 98 percent of the DCI-P3 color gamut.

The monitor is also a USB-C hub monitor crammed to the gills with connectivity. This includes multiple USB-C ports, one of which can handle up to 90 watts of Power Delivery, five USB-A ports, and ethernet. That's as much as you'll find on any USB-C hub monitor sold today. 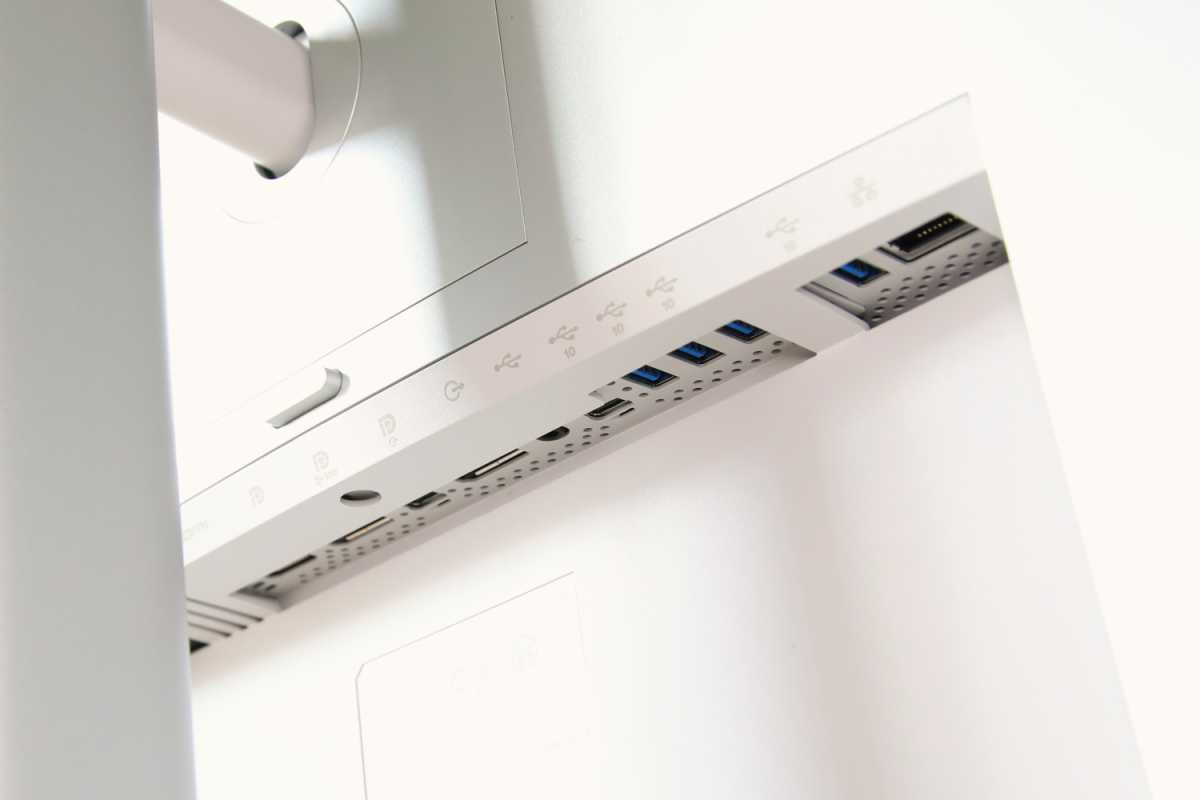 The Dell Ultrasharp U3223QE has a simple silver-gray plastic chassis that feels robust but lacks flourish. Even the textured finish found on some less-expensive Dell monitors is missing. At the front, you'll find slim bezels on four sides. The bottom bezel is so slim there's no room for the Dell logo, so it's been moved to the stand.

A sturdy rectangular base keeps the U3223QE supported. It's plain but compact, which is a plus. Competitors like LG and Samsung often use a wider base. A wide base might look more stable, but it's no better in practice, and consumes desk space you might want to use. Dell's simple yet effective stand is the better choice.

The stand adjusts for height, tilt, and swivel—features that shoppers expect at this price. However, it throws in a bonus: It can pivot 90 degrees for use in portrait mode. This is rare for a 32-inch monitor, as most stands lack the height to allow it. 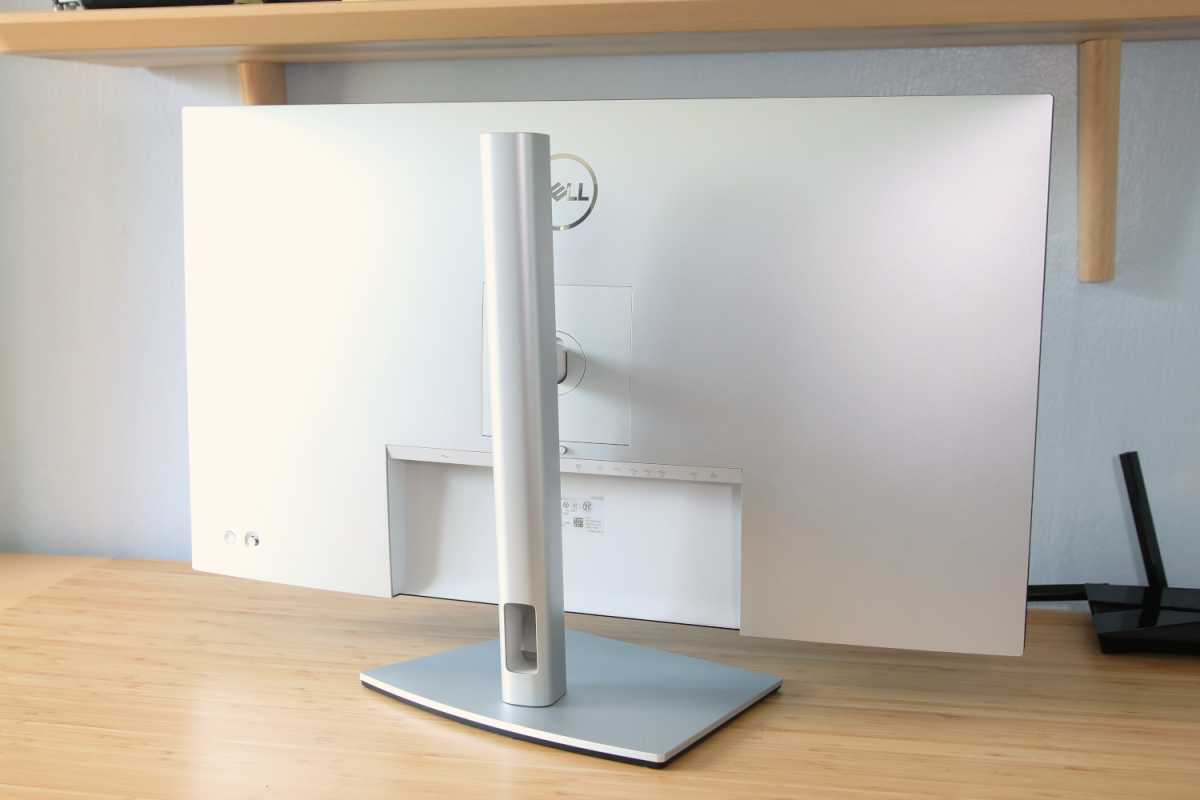 The stand is simple in appearance, but does offer flexibility such as height, tilt, and swivel, plus the ability to turn 90 degrees for portrait mode. Image: Matt Smith / Foundry

You control the Dell Ultrasharp U3223QE with a joystick on the lower-right quarter of the monitor's backside. I found it easy to locate, though it may prove a reach for some users. A power button is located nearby, but Dell distinguishes it with a concave surface that differs from the joystick. This prevents accidentally hitting the power button instead of the joystick.

The on-screen menu is laid out in simple, logical groupings, and the joystick control feels intuitive when scrolling through options. Dell has a clear edge over competitors like Viewsonic and LG, which tend to have more opaque menu groupings. BenQ is the only brand that has Dell beat. Some BenQ monitors, including the DesignVue monitors that directly compete with Dell's Ultrasharp, have a bundled remote.

Menu options are extensive and clearly geared towards more discerning owners. The U3223QE offers three preset color gamut modes (sRGB, Rec.709, and DCI-P3), plus a healthy dose of gamma, color temperature, and color hue adjustments. These features will be more than enough for all but the most demanding professionals.

This is a USB-C hub monitor, and it's not kidding around about connectivity. There's HDMI and DisplayPort, of course, plus USB-C with DisplayPort Alternate Mode and 90 watts of Power Delivery. The monitor also supports DisplayPort MST and has DisplayPort-out, so you can daisy-chain a connection to additional DisplayPort monitors.

But wait, there's more! The monitor also has a second USB-C upstream port that supports USB3.2 Gen 1 speeds and delivers up to 65 watts of power. This is useful for connecting a second USB-C device for data only. There's also a USB-C downstream port for passing through data and a total of five USB-A ports that support USB 3.2 Gen 2 speeds.

The U3223QE has an Ethernet port, supports Gigabit Ethernet speeds, and even has a LED light that indicates whether a connected device is operating at 1000Mbps or 100Mbps speeds.

Dell's U3223QE is stacked with features but it is missing one thing shoppers may expect. Speakers. Dell tends to exclude them from a variety of monitors. That's ok, as monitor speakers tend to be bad, but shoppers should know this before buying.

Alright, let's get into the meat of it. The USB-C hub is excellent, but this monitor's defining feature is the IPS Black panel. Dell's U2723QE and U3223QE are the first to bring the technology to the North American market.

The first test, brightness, is not an area IPS Black promises to improve, but the U3223QE does well all the same. It hit a maximum sustained SDR brightness of 449 nits. This is an excellent result for SDR and among the highest I've observed in a monitor with a conventional edge-lit LED backlight.

In truth, the brightness is overkill, but it's good news for shoppers looking for a display that can handle an unusually bright setting. 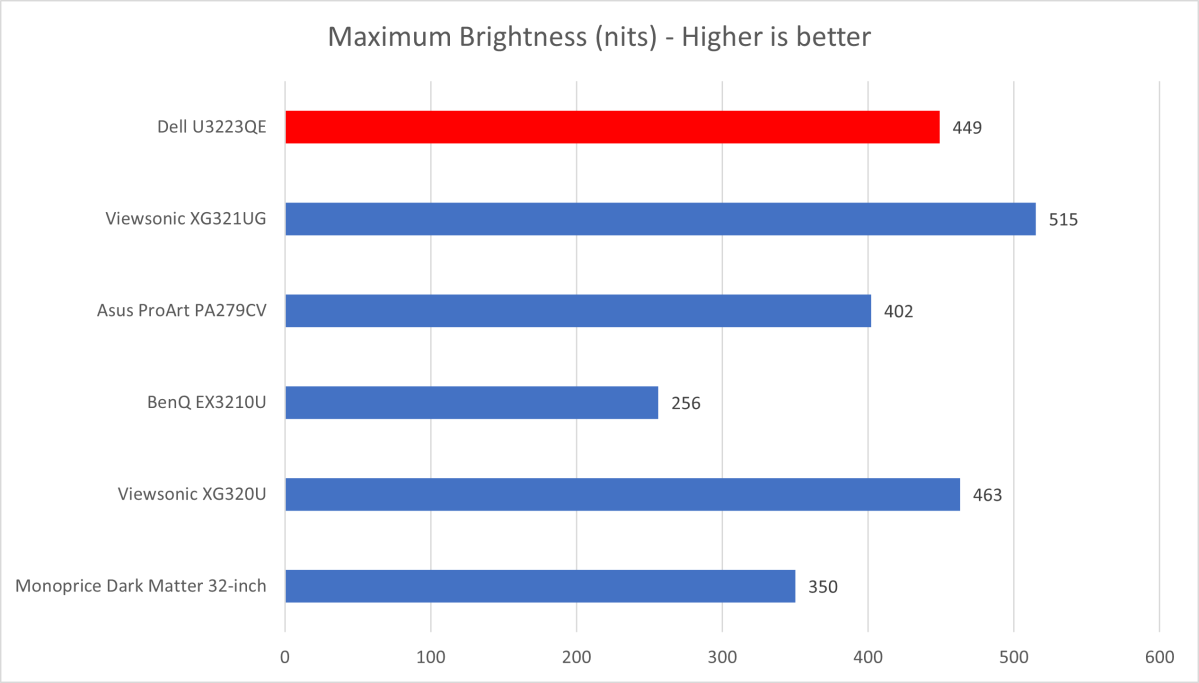 Of course, contrast is the test monitor enthusiasts have been waiting to see, and it's good news. IPS Black does what it claims to. The monitor achieves a maximum contrast ratio of 2,190:1. That's roughly double what the best conventional IPS desktop monitors can provide.

I recorded a minimum luminance of .9 nits with the monitor at 50 percent of its maximum brightness. Most conventional IPS panel monitors display a luminance between .16 and .28 in similar conditions. 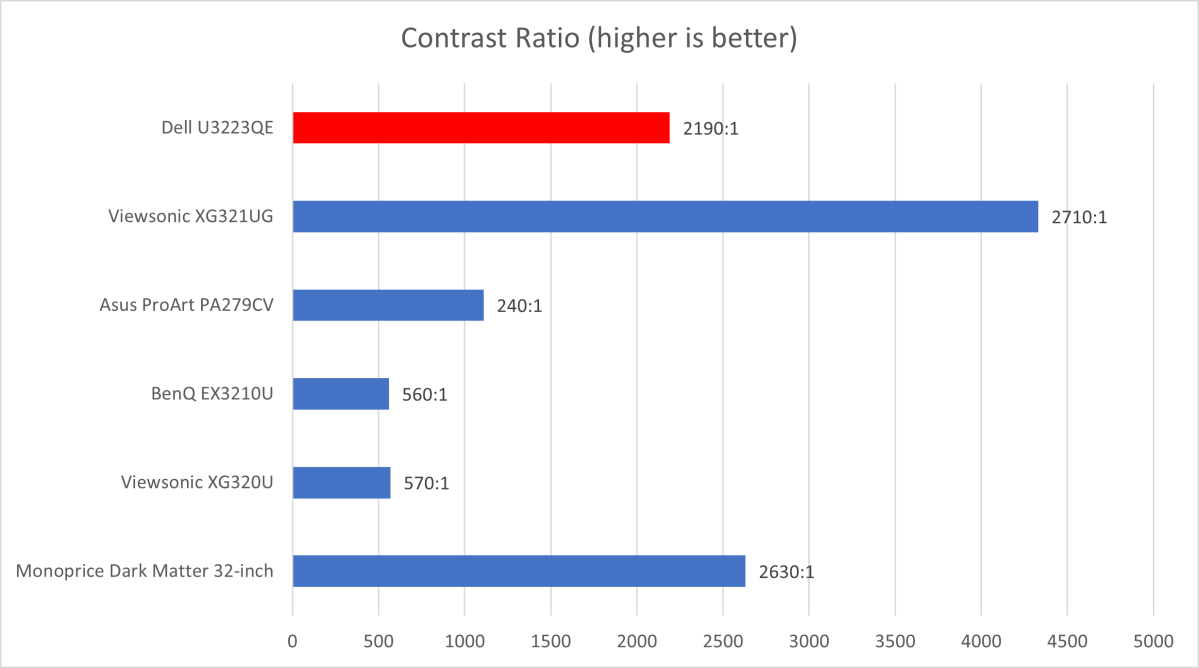 Color gamut, the maximum range of colors a monitor can display, is another win for the U3223QE. It delivers up to 99 percent of the DCI-P3 gamut and up to 89 percent of AdobeRGB, plus 100 percent of sRGB.

These figures are exceptional for any monitor. The U3223QE outperforms most of its IPS peers and nips at the heels of OLED. 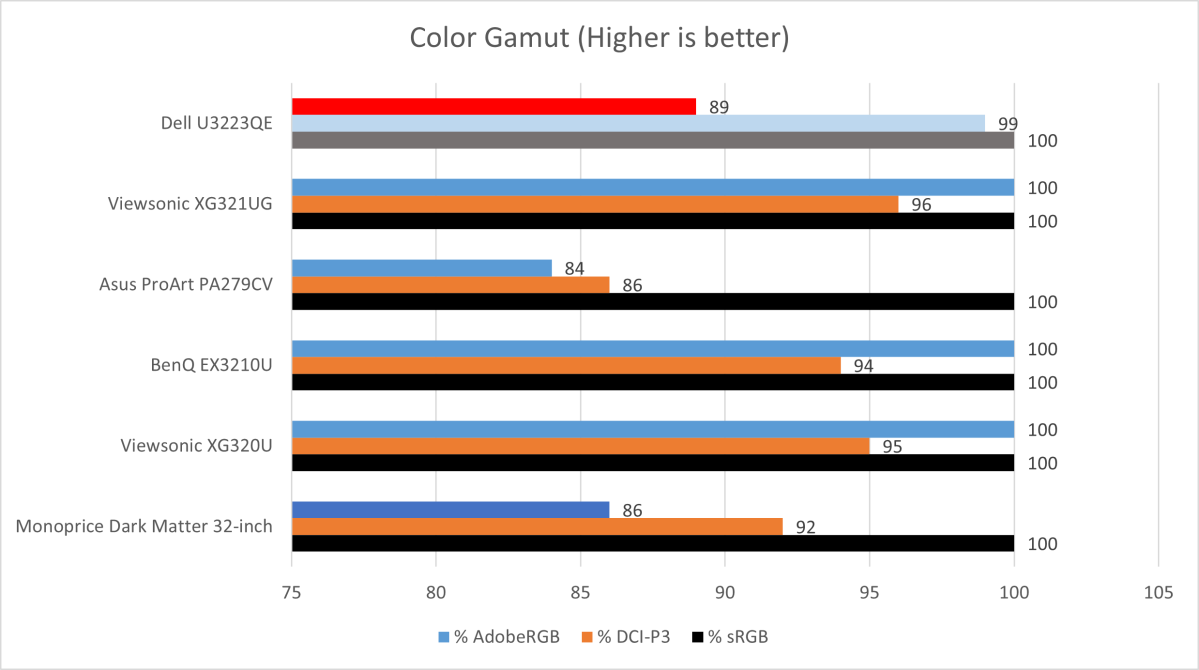 I wrap up the graphs with color accuracy, where the U3223QE once again scores a solid victory. The monitor had an average color error of 1.01, which is a great (though not exceptional) result. The U3223QE is not beating its competition, but the vast majority of owners will find the monitor's color performance attractive.

As mentioned, the U3223QE includes preset color modes for the sRGB, Rec.709, and DCI-P3 color gamuts. Rec.709 is not a gamut I test for, but the sRGB and DCI-P3 modes were accurate and performed within the color and luminance range expected. The DCI-P3 mode was the most color accurate of the bunch with an average color error of .83. 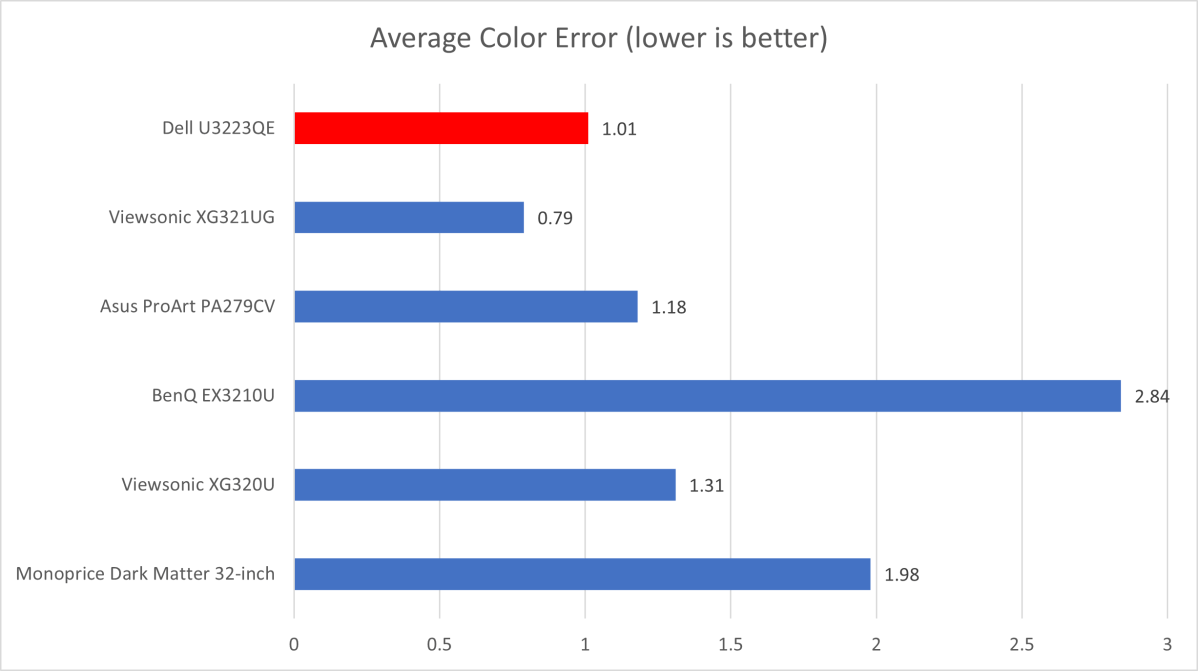 There is just one significant weakness to note: luminance uniformity. Despite all its strengths, this is still an edge-lit LED panel, and that means the edges of the display are notably brighter than the middle in dark scenes. My review unit also had a couple minor blotches of brightness, a problem typical of IPS monitors.

To its credit, the IPS Black panel seemed to make these spots dimmer and less distracting, but they're still there. This is an area where Mini-LED and OLED alternatives will put the U3223QE to shame.

The U3223QE is an excellent performer by the numbers. It's also a subjectively fantastic experience out of the box. The combination of a wide color gamut, accurate color, and above-average contrast creates a lavish, vivid experience with a wonderful sense of depth. Feed it high-quality content, such as uncompressed 4K or a cutting-edge 3D game, and you're in for a treat.

Okay, so the Dell U3223QE is a superb SDR monitor. HDR, though? Forget about it.

Yes, the monitor can achieve an excellent maximum brightness of 507 nits. And yes, it has the color gamut to provide some extra oomph to HDR content. The IPS Black panel's added contrast should also, in theory, be helpful.

It's not enough. Though bright, the U3223QE's edge-lit backlight can't handle variations in luminance well enough to make HDR stand out. It can sometimes look less attractive than SDR, even when displaying bright scenes.

I also noticed odd behavior in the U3223QE's backlight. It seemed to ramp up noticeably in brightness when fed a bright full-screen image but then settle back down over several seconds. This was distracting and also caused my SpyderX colorimeter to report major color errors in HDR testing.

Don't buy this monitor for HDR. For now, those who want great (or even decent) HDR must turn to a more expensive Mini-LED monitor like the Asus ROG Swift PG32UQX or Viewsonic XG321UG.

The Dell Ultrasharp U3223QE is not meant for gaming and has a mundane 60Hz refresh rate. Fast motion looks okay and games capable of hitting a consistent 60 frames per second feel smooth enough, but it's no comparison to even a 144Hz monitor, nevermind 240Hz and beyond. Adaptive Sync support is missing, too.

That's a bummer, though not as much an issue as it seems. Competitive gamers don't use a large monitor, anyway, as they prefer smaller 24.5-inch screens. Driving 4K at a high refresh rate is also a challenge, so most competitive gamers stick to 1080p. Still, hardcore Valorant and Counter-Strike players should make no mistake. This isn't the monitor for you.

If you prefer more atmospheric games, however, or titles with limited fast movement, the U3223QE is a decent pick. The monitor's exceptional color, good contrast, and sharp 4K resolution make it well suited to strategy titles like Civilization VI or open-world games like Assassin's Creed Odyssey.

The Dell Ultrasharp U3223QE is a great debut for IPS Black technology. It promises improved black levels and contrast, and that's exactly what it delivers. It also retains the great color performance high-end IPS panel monitors are known for, and, to sweeten the deal, provides crisp 4K resolution.

But there's more to the U3223QE than the panel. It's also a fantastic business, productivity, and professional monitor loaded with image-quality options and a king's buffet of connectivity. You can plug in a high-end laptop over USB-C and gain instant access to five more USB-A ports, DisplayPort-out, and ethernet.

Lackluster HDR performance and the lack of any gaming-focused features do hold the monitor back slightly. Gamers are going to want to buy a gaming-specific monitor. However, if you only game occasionally, or aren't too concerned about motion clarity, the U3223QE will work fine.

The price is the kicker. Dell sells the U3223QE for US$919.99 (AU$1,217) online. That's not inexpensive but, given everything on offer here, it's good value, and makes for an easy recommendation.