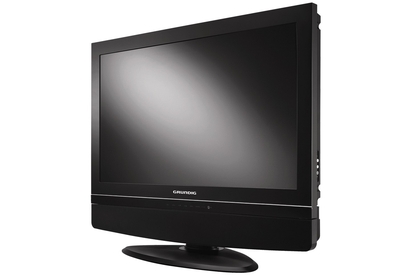 The Grundig Elegance GLCD4001 is a mid-range TV with entry level features and above-average performance at a reasonable price.

The Grundig Elegance GLCD4001is a 40in LCD TV with a native resolution of 1366x768. Suitable for displaying both standard and high definition content, this unit is part of Grundig's Elegance series, designed to be stylish on the exterior but with entry-level features and price.

We tested the Gundig in both standard and high definition and found both to be good, but not without a handful of image quality aberrations. Since this is a high definition TV, it was no surprise that it handled high definition content rather well while suffering a little when attempting to scale standard definition movies.

To test its high definition performance, we connected the TV to the same types of devices you might use at home. We ran gaming tests using the Xbox 360 and also checked the image quality by watching HD-DVD movies.

On the Xbox 360 we played Ghost Recon Advanced Warfighter 2 and Tony Hawk's Project 8 at 720p and found the image quality to be above average. That said, it wasn't without its share of problems. We noticed some detail loss due to minor pixelation but this was only noticeable when in close proximity to the unit. From a comfortable viewing distance it was less noticeable. Thankfully, there was no image noise and the unit could handle motion well without any stuttering. However, there was some over-sharpening that was not able to be corrected. Most factory presets on flat panel TVs have the sharpening setting turned up too high. This causes a slight halo around all objects which, in turn, creates undue artifacts (blocks of pixels). Normally, this is able to be countered by turning the sharpness setting down but in the GLCD4001 it was still noticeable after calibration, even when the sharpness was turned down to zero. At the lowest setting the over-sharpening was greatly reduced but it was still evident nonetheless. If you plan to hook up a HD gaming console like the Xbox 360 or the Playstation 3, this TV will perform well with only some minor image flaws.

We also viewed the Empire State Building finale from the King Kong HD-DVD at resolution of 1080i. Thankfully, the over-sharpening seen in the gaming tests was not a problem when viewing HD movies. Furthermore, the overall image quality during this test was excellent with no pixelation, image noise or contrast stepping. The colours were accurate and motion was handled without any problems. The only issue that we came across was in regard to black levels. Unfortunately, the black levels on this TV tended to look a little gray. We tried to fix this problem by reducing brightness and by ramping contrast and, while this sorted the black levels out, it was at the cost of too much image clarity and a loss of much detail in the image. This unit would benefit from backlight calibration options, so you can turn down the intensity of the backlights when watching movies.

For our first test we used the Digital Video Essentials DVD. This DVD consists of still image test patterns, which are used to check for any image quality flaws at a fundamental level. We found no discolouration, no contrast problems, no image noise and excellent blending along the greyscale. We felt that whites were not as pure as they should have been and tended to look a little dull and slightly gray. Apart from this one issue, the Grundig was excellent when viewing still images. That said, rendering a still image is a lot easier for a TV than trying to display a moving one. For our second standard definition test, we watched the lobby scene from The Matrix. There was no contrast stepping and no pixelation in the image but the same black level problem we saw when viewing HD-DVD was still apparent. There was also a slight amount of over-sharpening and noticeable scaling artifacts. However, considering this is an entry level unit, we found the image quality to be above average, despite its flaws. If you're buying this TV to watch DVDs, it will handle the content well, but you should still keep these issues in mind nonetheless.

We connected the unit to a PC using a VGA connection and ran DisplayMate Video Edition at a resolution of 1024x768. We were very impressed with how well the GLCD4001 displayed the desktop image. The icons and text were clear and there was no over-sharpening whatsoever. The first test we performed was the only one in which we had any problems. At default settings, this unit slightly cut off the far left side of the screen by about 2mm. This was easily corrected with a slight tweaking of the V-Hold but honestly, most users will not even notice this at all. We only noticed it due to the fact that we have a test that looks for it. Looking at the desktop, it is not apparent at all. We didn't notice any discolouration or noise in the grayscale tests, and there wasn't any contrast stepping either. There were some banding issues in the horizontal resolution test, but this was to be expected. Since the native resolution is 1366x768 and the maximum supported PC resolution is 1024x768, some interpolation is required. This isn't a big problem though and shouldn't affect the TV's overall ability to display images from a PC. We also noticed some slight artifacts when displaying magenta text on a green background but, once again, this shouldn't impact overall performance. If you are looking for a unit to use with a media centre PC, the Grundig GLCD4001 will certainly perform the job beautifully.

Since this is the "Elegance" series, it was to be expected that it would have a sexy design. With a piano-black bezel, and a bottom-mounted speaker system, the GLCD4001 certainly looks stylish. The TV also has good connectivity options with two HDMI, one Component, one S-Video and two composite connectors, as well as a VGA port for a PC.

The speakers are located below the panel and produce rich sound up to about 85-90% volume, at which point they start to distort and exhibit some lack of clarity with poor bass and some case resonance. This pales in comparison to the Grundig Cinemo GLCD4600HD which had incredible sound quality but for an integrated speaker system, it is still quite good nonetheless.

One of the biggest omissions of the unit is the absence of an integrated HDTV tuner. The built-in analogue tuner struggles to produce a good image and will greatly depend on the quality of the signal in your area. Even then, the image it produces will lack clarity, detail and definition. We recommend purchasing a digital TV set-top-box (STB) if you purchase this unit. Even a standard definition STB will vastly improve free-to-air TV viewing, but if you can afford the extra outlay, a HDTV model will obviously look better still.

Overall, the Grundig Elegance GLCD4001 is a mid-range TV with entry level features and above-average performance at a reasonable price. It did well in both standard and high definition, but lacked the performance of some of the high-end units we have reviewed. However, it is far better than most entry level units we have seen and with excellent PC connectivity; it will appeal to Media Centre PC owners.