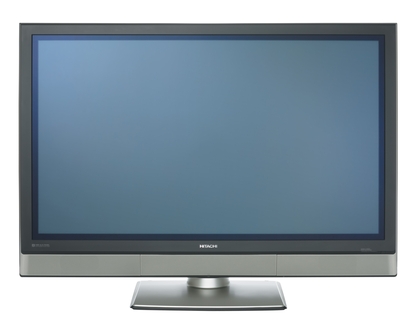 The 50in Hitachi 50PD960DTA is a familiar product. Like the smaller 42in 42PDP960DTA, it uses an ALiS panel to achieve 1080p compatibility. However, unlike its sibling it has a higher resolution. Our testing found that its 1280x1080 native resolution greatly reduced the level of vertical pixelation that we had seen in the smaller model but the PC mode was still problematic and the standard definition performance was marred by contrast issues. This unit clearly shines in its high definition performance and it will suit those eager to get in on high definition movies and gaming.

We tested the 1080p performance using the Playstation 3 video game console and the game Virtua Tennis 3. The colour reproduction and clarity were both top-notch and we found no ghosting or contrast problems. Since this is an ALiS panel and since the native resolution is not 1920x1080, the image needs to be scaled down to fit. As a result of the native resolution, we discovered a minor level of vertical pixelation, which was noticeable primarily on text and diagonal lines. This aliasing was accompanied by some over-sharpening on edges, but this could be reduced with calibration. It should be made clear that this isn't a 1080p television; it's only 1080p-compatible via interpolation. That said, its 1080p performance is quite good. A true 1080p panel would look better, but this unit should satisfy most users.

To test high definition performance we run HD gaming, HD-DVD movie playback and HD video tests. Using the Xbox 360 and the game Ghost Recon Advanced Warfighter 2 the image quality was excellent. There was a little over-sharpening, but this could be fixed without any hassle. There were no ghosting or motion issues and no image noise. Overall, we were impressed with the image quality at 720p and 1080i.

The HD-DVD test using the film Mission Impossible III revealed a little noise in dark areas and a slight over-saturation of yellow. The over-sharpening issue was still prevalent in these tests and removing it resulted in the image looking a little too soft-focused. However, the level of detail was excellent and from a comfortable viewing distance, these problems will most likely not affect the viewing experience.

We also ran HD video tests using 720p trailers downloaded from the Xbox Live service with results very similar to the HD-DVD testing. The most noteworthy trait shared between the two tests was the noise in dark areas of the image. Over-sharpening was also seen, though to a lesser extent. The noise in the image was also seen in our standard definition greyscale testing, suggesting it's a fundamental flaw of the unit.

Using the Digital Video Essentials DVD, we ran a series of test patterns to see how well the unit performs at a fundamental level. In the greyscale block test we noticed noise and active pixels in low grey. This was expected considering the noise seen in dark areas in the HD testing phase. This noise also manifested as block white artefacts during the black on white block test. This test has very subtle grey vertical stripes against a black background. The subtlety was lost on this unit and replaced with dancing white artefacts, which look like grey from a comfortable viewing distance, but can also be seen moving when the patterns are meant to be static. The colour block tests were excellent with no over-saturation or noise and the full greyscale test, while still showing noise in the low end of the scale, was rendered well and had no discolourations.

We also ran a DVD video test using the lobby scene from The Matrix to test real-world performance. Overall, the image quality wasn't too bad considering it was being upscaled to almost twice its resolution. There was no pixelation, only minor over-sharpening and no discolourations. However, there were noticeable contrast issues resulting in stepping on skin tones, dark areas and environmental effects like dust particles. At the point when different shades of colour are meant to blend seamlessly, the panel struggled. We also noticed active pixels and a little shimmer in areas of the image, but they weren't noticeable from a comfortable viewing distance.

Like the 42PDP960DTA, this unit was not made with PC users in mind. While a PC connection is supported, it shouldn't be used for any extended PC usage. Normally we wouldn't recommend using Plasma TVs with PCs anyway considering due to problems with potential image retention or burn-in damage that can result, but image retention on this unit was non-existent.

The problems that this TV has when running in PC mode all have to do with poor scaling. To test the capabilities of the 50PD960DTA, we ran our DisplayMate Video Edition software from a test-bed PC. DisplayMate is a comprehensive display testing software that uses advanced test patterns designed to discover any shortcomings in a display device. The highest stable resolution we were able to obtain when connected via D-Sub was 1024x768. The Geometry and Distortion tests revealed flicker on all patterns, which we suspected may have been caused by interpolation. Our suspicions were confirmed in the Sharpness and Resolution tests. The vertical line tests were flawless but the horizontal line tests flickered painfully. The focus matrix and all the moire tests also fell victim to this problem. The colour and greyscale tests were superb with no noise or discolourations. Overall, if you're going to run a PC with this unit, it should only be in a limited capacity. It's not designed to be a monitor replacement or to be used with a Media Centre PC.

The Hitachi 50PD960DTA comes with an integrated high definition television tuner. The initial automated setup took only 6 minutes and found a wide range of stations. The image quality was excellent and the channel switching was very quick. We had no problems with this feature. The speakers are situated below the bezel and produced a rich sound, even at high volumes. The bass was a little muddy at times, but this is to be expected for a unit without a sub-woofer.

The overall aesthetic of the unit is quite attractive with a matte black bezel and gun-metal grey chassis and stand. The connection options are situated at the back of the unit and include two component, two HDMI, two composite, one S-Video and one D-Sub PC connector.

The Hitachi 50PD960DTA is a mid-range unit with excellent performance in high definition and reasonable performance in standard definition. It exhibits poor performance when connected to a PC, so those of you looking for a TV to use with a PC should look elsewhere. While it isn't the best Plasma TV on the market, it is primarily suited to displaying HD content.