This phone-centric 1440p, GPS-enabled dash cam is stylish, easy to set up and use, and takes good day and night captures. 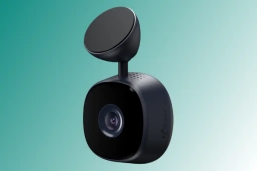 Though we'd prefer not having to create an account to use it, the Avivo View ticks all the boxes (good captures, ease of use, GPS) for the top-notch modern dash cam.

If you want a dash cam with minimalist looks, the eye-catching iOttie Aivo View, with nary a button in sight, might be your best bet. Setup requires a phone app, but that's a small hassle in a phone-centric world. What's not necessarily kosher is having to create an account before you can use said app.

Otherwise, the Aivo View is an excellent 1600p front dash cam with integrated GPS, as well as above-average day and night captures and Alexa support.

The Aivo View body is a simple rounded square shape that looks and feels solidly built. It uses a magnetic coupled mount whose base plate attaches to your front window using semi-permanent adhesive. There's a micro USB connector on the right side, and an SD card slot on the left protected when not in use by a rubber plug. That's it, other than the power light on the cabin side. (See below)

While the camera is capable of 1600p/30 frames-per-second captures, it takes 1440p video at 30fps by default. Lesser resolutions down to 720p are also available, should you need to save space or reduce wear on your SD cards. The field of view is 140 degrees, which captures quite a bit of action to the sides.

iOttie also includes a Bluetooth remote button that you can affix to a convenient location in order to instantly capture important moments with a touch. These videos are saved and won't be overwritten as with normal looped video. Videos are also saved if the g-sensor senses impact, as with all dash cams. 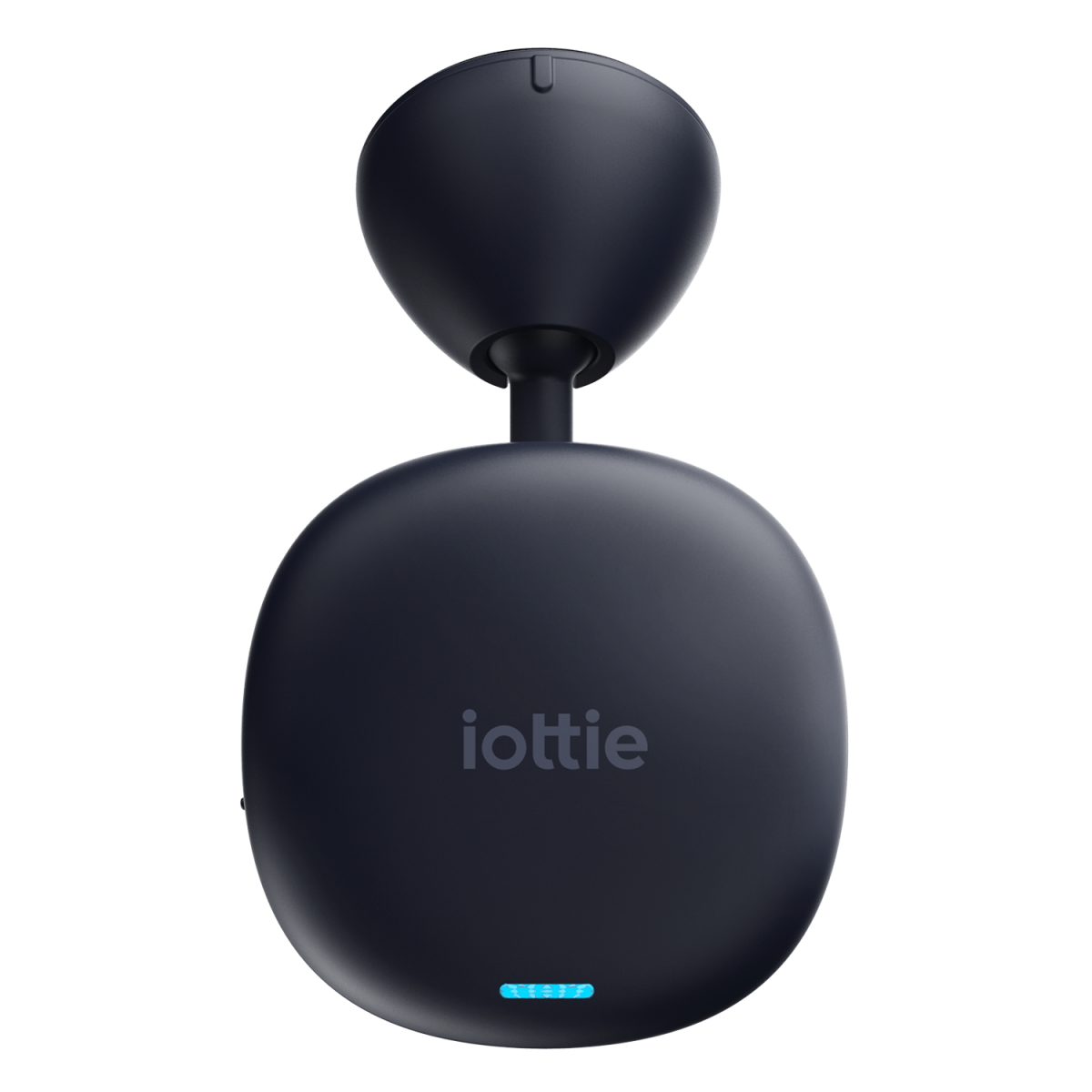 There's not a lot to see on the cabin side of the Aivo View. There's no display. All configuration and viewing are done via your phone.

The camera connects to your phone via Wi-Fi and the app is used both for a live view and for configuring the camera. As noted, you must create an account before that can happen. There's no internet while connected so you'll generally want to use the app sparingly. Unless of course you want to use Alexa to control the Aivo View, whose commands the camera fully supports. 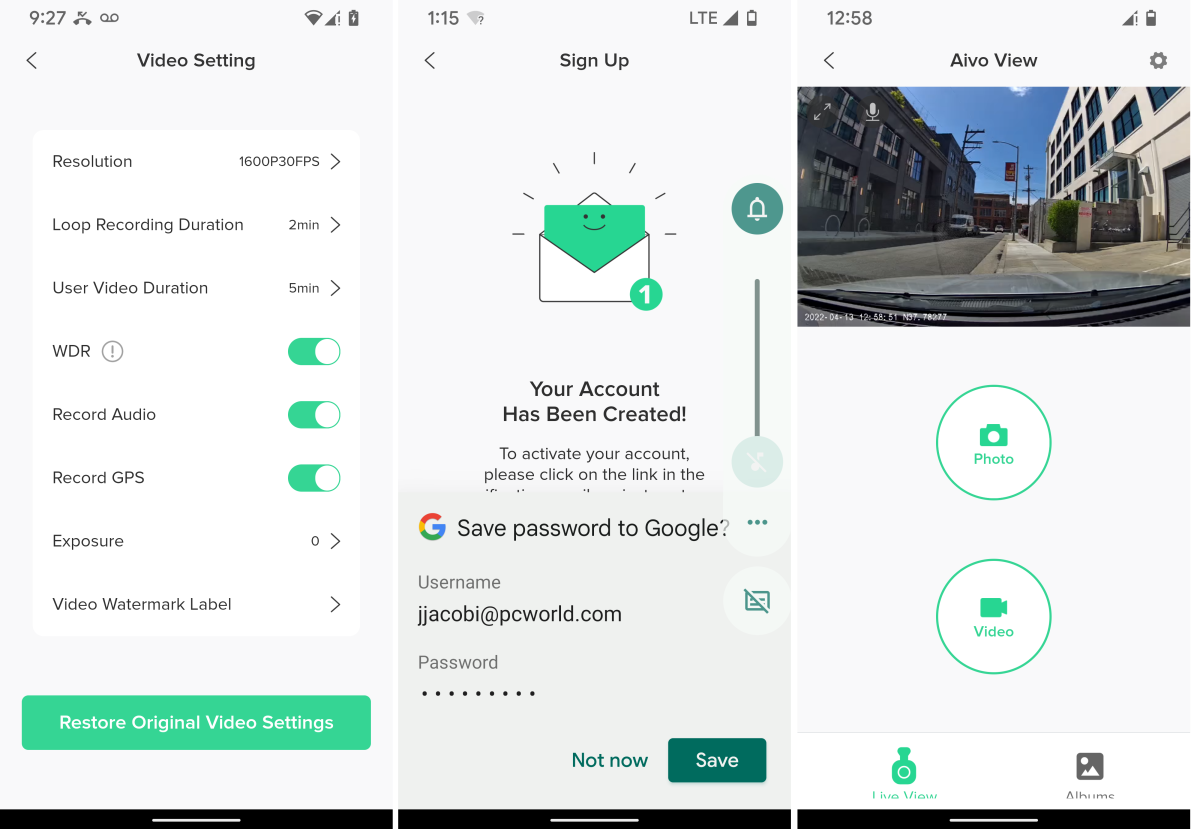 Settings, account creation (required), and live view in the iOttie Connect app. Above you can see some of the settings, including the 1600p video option.

As to the account, iOttie says it allows multiple devices to be registered and logged, as well as allowing the company to notify customers of firmware updates. I'm not saying an account can't be useful, but none of that requires an account. Only online storage requires an account and with GPS data in play, one might be concerned about telemetry and privacy. The company says they don't use the former, and never market GPS data.

Below you'll see the Aivo View's front capture on a partly cloudy day in San Francisco. The fish-eye effect of the 140 degree FOV lens is apparent in the telephone wires, but the overall effect in the horizontal plane is minimal. Note that the Aivo View is yet another dash cam that can't seem to extrapolate a time zone from GPS coordinates, though it got the date correct. 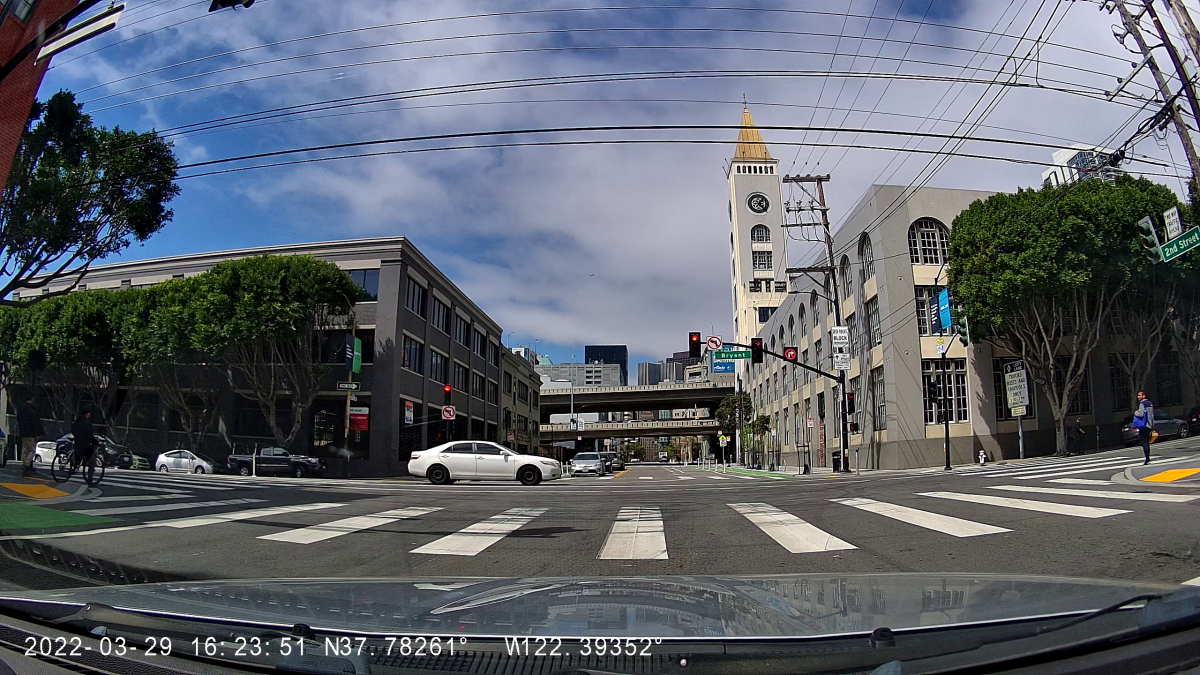 Night captures were very good; however, they don't reveal too much extra detail when processed post facto. Regardless, they're colorful, easy on the eyes, and grab enough detail for legal purposes and casual viewing. 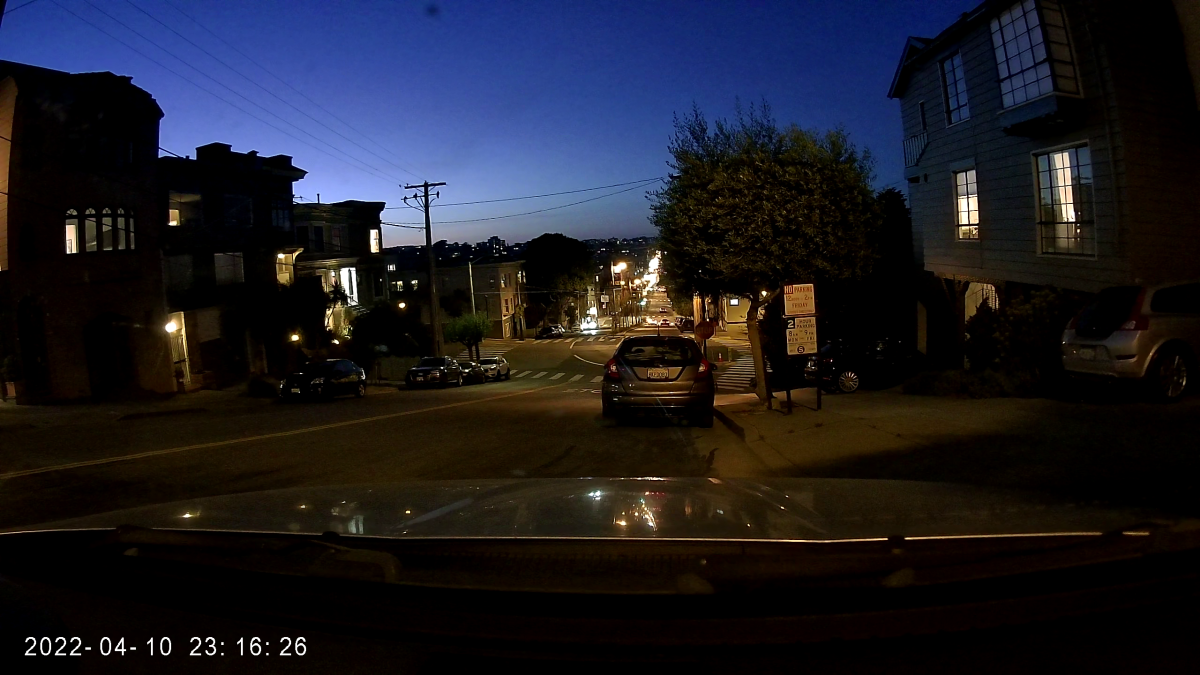 The capture below is with my headlights on. You can see that the extra light blows out the numbers on the license plate in front. This is basically a worst-case scenario with no movement so don't take it too seriously. That said, other dash cams have handled the same scenario better. 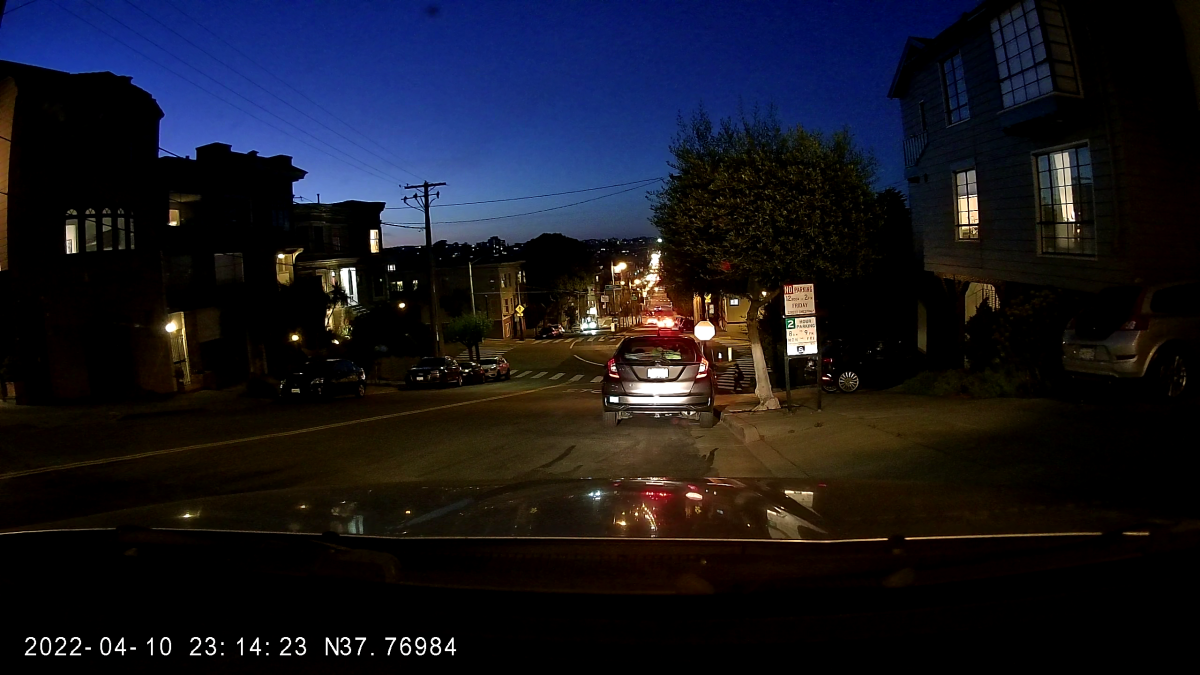 While I wouldn't put the Aivo View's captures at the top of the heap, they're certainly in the realm of top-tier status and very good for the price.

The Aivo View is a very good dash cam that looks good in the cabin, and is a perfect match for today's phone-centric users. It's also affordable as far as GPS-enabled cameras are concerned. If it weren't for the account requirement, I'd have zero complaints.