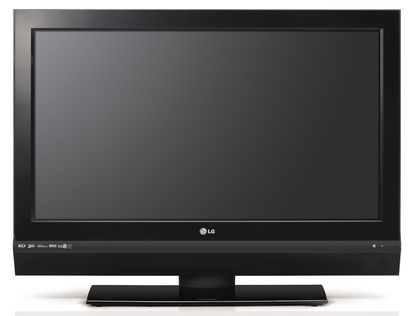 The LG 42LC2DR is a good mid-range unit with an integrated HDTV tuner and DVR and only a handful of image quality problems when viewing HD content.

The LG 42LC2DR is a 42in LCD TV with a built-in 250GB Digital Video Recorder (DVR). Using the integrated HDTV tuner you can watch, record, pause or rewind both standard definition (SD) and high definition (HD) television without having to use an external set-top box or PVR. An all-in-one solution, this unit is a remarkable idea and it's been implemented rather well. In our testing, the DVR performed brilliantly and the overall image quality of the panel was reasonable. There were some problems found in the image quality when viewing HD and SD video signals.

Integrated DVR functionality for today's big-screen TVs is a nice idea and LG has implemented it well in this unit. With the touch of a button you can access the dedicated DVR menu and easily schedule recordings, watch previously recorded programs or look at the channel guide. The DVR also allows for time-shifting, so you can pause or rewind live TV programs. This is handy if you want to watch an 'instant replay' of a live TV scene, and is also useful if you get interrupted during an interesting show and want to pause it so that you don't miss any of the action.

When you pause live TV, the unit starts to store the program you are watching in a temporary buffer on its 250GB hard drive. It doesn't actually store the program permanently, so you can't access it whenever you want. If you want to play back a show at a later time, you have to record it by either using the scheduler, or by simply pressing the 'record' button at any time while you are watching TV. Scheduling a recording is extremely simple and involves telling the DVR what time and which channel the program is on. You can set it to record the program as a once-off event, or as a recurring daily, weekly or monthly event.

The 250GB hard drive will let you record up to 40 hours of HDTV programs.or 100 hours of SDTV. Because the TV has an analog tuner, in addition to the digital TV tuner, you can still watch another channel while recording a digital one. Likewise, the TV has picture-in-picture (PIP), so that you can follow a sporting event in one corner of your screen while watching another program in the main area of the screen, for example.

We had no problems with the DVR function at all. In future models, we'd love to see an Ethernet port or a wireless network adapter for Internet access and the ability to use IceGuide for scheduling recordings. Currently, the TV networks only provide 'now' and 'next' schedule information. With IceGuide you can see the entire schedule and simply click on any listing you want to record or watch, without having to set a timer.

To check the HD capabilities of the unit we used the Xbox 360 for gaming tests, viewed HD video and an HD-DVD movie. As a whole, the image quality was quite good but there were a few image quality aberrations.

In the gaming tests we noticed some detail loss and pixelation particularly during player movement. We tested using the games Tony Hawk's Project 8 and Ghost Recon Advanced Warfighter 2 and found that minute details like thin diagonal lines and curved surfaces tended to look a little pixelated, especially along the vertical axis. This was noticeable even from a comfortable viewing distance. We also found a high degree of over-sharpening on text and edges. We attempted to compensate for this in the on-screen display (OSD), which greatly reduced it, but even with the sharpness turned down all the way, it was still present.

The Mission Impossible III HD-DVD playback test didn't improve matters as moderate image noise was evident. We also noticed motion jitter during some of the faster moving scenes, but there was no discolouration, pixelation or contrast stepping. The over-sharpening issue was still present to a minor degree, but would not be noticeable from a comfortable viewing distance.

We also ran 720p HD video which we downloaded from the Xbox Live service. While the pixelation we noticed in the gaming tests was still present when watching HD video, it was far less severe and even the over-sharpening was almost non-existent. The HD image quality of this TV could have been better compared to other units in the mid-range market, the market in which this model sits. Overall, despite these issues, it still provided acceptable quality.

In our SD tests, the unit performed surprisingly well, considering it is an HD panel. To test SD quality we use three test DVDs: Digital Video Essentials, the Philips CE2006 Demo and the lobby scene from The Matrix.

The Philips CE2006 Demo DVD tests were delivered beautifully with no real problems to speak of. There was a very slight hint of over-sharpening, but it was barely worth noting, while the colour and contrast tests were rendered flawlessly.

The Digital Video Essentials test was a similar story. However, we did detect some pixel fluctuations in mid-level greys during the greyscale tests. The colour block, SMPTE pattern and contrast tests were all delivered flawlessly and, despite the problem in the greyscale test, the blend along the scale was exceptional and showed no evidence of stepping.

When viewing the lobby scene from The Matrix we were quite impressed with the performance. Many panels we review have problems with the colours in this film, but the LG showed no discolouration whatsoever. The grain in the image was consistent with the usual level expected from watching a DVD on an HD panel, but it wasn't excessive. There was a little pixelation at times, but it wasn't to the detriment of the overall presentation. Finally, we found no over-sharpening, ghosting or contrast-stepping in the image. With SD content, this unit performs well. It's well-suited for DVD buffs.

We tested the TV by connecting a PC into the VGA port at a resolution of 1024x768, which is the highest supported resolution. As the TV has a native resolution of 1366x768, this drop in the resolution means that the panel will need to scale up the image. Despite this, if the interpolation is done well, the image can still look perfect, as we have seen in other units on the market. However, our DisplayMate Video Edition tests revealed some problems that created vertical banding during the Sharpness and Resolution tests, a sign of below-par scaling. Thankfully, this banding shouldn't impact greatly on the overall picture quality as it will only be noticable in uncommon instances. Our other tests showed no image noise or discolouration in any of the greyscale tests and the colour reproduction was excellent. The only other issue we encountered was a little over-sharpening on the desktop icons and text which we were able to greatly deminish via calibration but couldn't remove entirely. Bearing in mind that it's not meant to be used as a monitor replacement, the LG certainly did work well as a monitor and would suit those of you who intend to couple it with a media centre PC.

The LG 42LC2DR has a glossy piano-black finish and angular design. The speakers are located below the bezel and produce a rich sound up to 60% volume. After that point the fidelity begins to degrade, eventually becoming uncomfortably distorted at around the 80% volume mark. The connectivity options of the TV include two HDMI ports, two component ports, two S-Video ports and two composite ports for video inputs and a 15-pin D-Sub connector for the PC connection.

Even though the HD performance was hampered by a handful of mediocre test results, on a whole it looked reasonably good. The unit's strong point is definitely its ability to display SD content. However, the most exciting and well-implemented feature of the LG is the integrated DVR, which works beautifully. Overall, AV enthusiasts may not be satisfied with the HD performance of this TV, but for those of you who are avid DVD watchers and for those of you who want an innovative TV and DVR solution, this unit will satisfy, especially at this low price point.