The LG Gram 17 compromises barely any top-line functionality to weigh under 1.4kg, excelling in battery life and display quality and offering up adequate power for its intended lightweight use, a commendable feat for a 17-inch laptop.

The LG Gram 17's purpose is obvious: to deliver lightweight productivity chops in a 17-inch laptop that's lighter than some 13-inch laptops. It performs that task exceptionally well. LG's notebook also has a stunning display, and while it won't break any performance records, its 11th-generation Tiger Lake CPU runs multiple applications and office-bound tasks with ease.

The LG Gram 17 also offers Thunderbolt 4 functionality and a better than all-day battery life, further adding to its versatility as a portable productivity workhorse. Combined, these features make it a standout in the category. 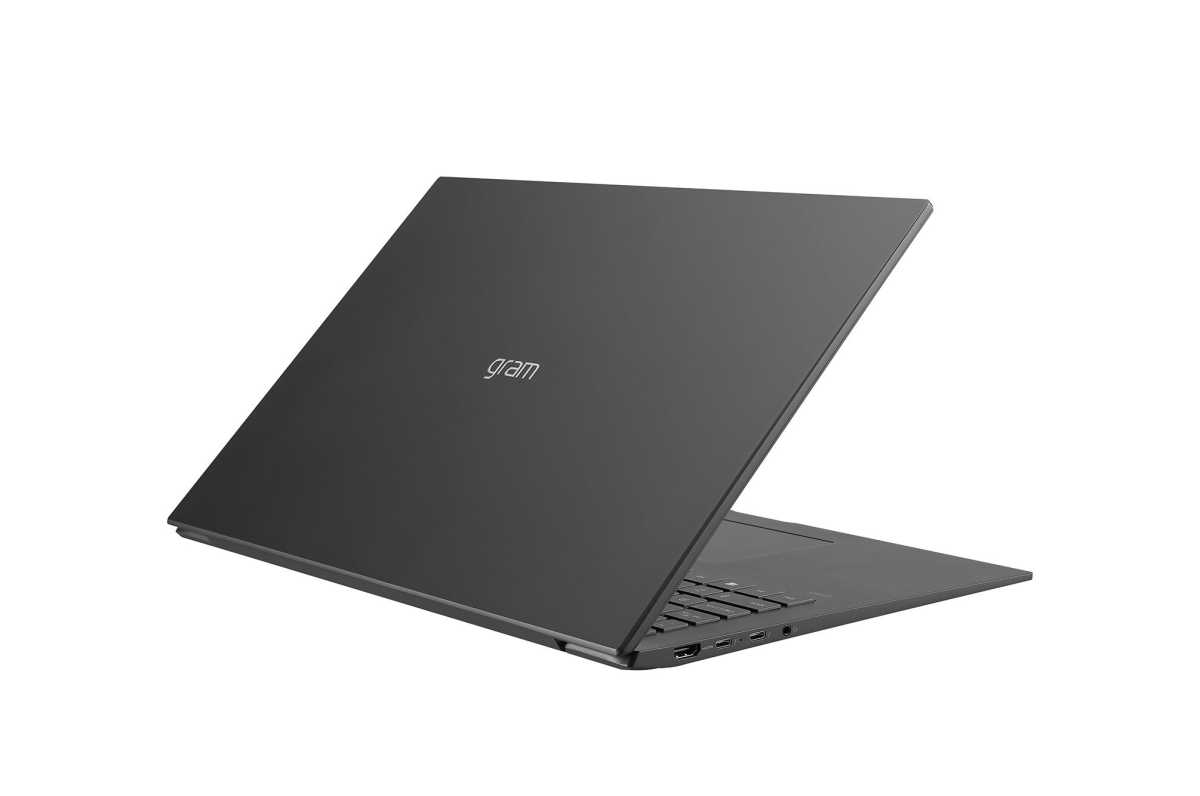 As a result, the LG Gram 17 is an exceptional option for work and study where frequent travel is required. Its presence was barely noticeable in my satchel. Carrying it, I couldn't help but think it's the kind of device you'd want to be hauling if you want to avoid repetitive strain injuries and postural problems.

A downside to being so light though, means the Gram 17 does occasionally break a cardinal rule for laptops: Thou shalt not flex. The top did slightly concave in when I applied some pressure, and the screen wobbled for a second each time I flipped it open. Did these things affect my experience? Not at all, since there are more sweeteners to compensate.

For example, there's a neat hidden hinge that tucks underneath the lower bezel, allowing the display to sit higher up giving you a better view of it. Its fans are remarkably quiet. The Gram also has U.S. military grade MIL-STD 810G durability certification that reassured me, while it might move somewhat, it's not going to break easily.

In our review of the 2019 version of the LG Gram 17, one criticism was its keyboard. A full-sized number pad meant that some keys were reduced in size, affecting typing accuracy. Thankfully, this problem has been fixed in the 2021 Gram 17.

Although it still sports a full-sized number pad, the Gram 2021's keyboard extends further to the outer edges of the laptop's frame, providing room for generously proportioned keys. In particular, the Enter and Shift keys—pain points in the previous release—are now wider, reducing the chance of mistypes.

What's more, these keys have plenty of travel, sound whisper quiet, and are super bouncy. They're also comfortably backlit with a soft light blue light. All up, these features meant writing on the LG Gram 17 keyboard was never a chore. 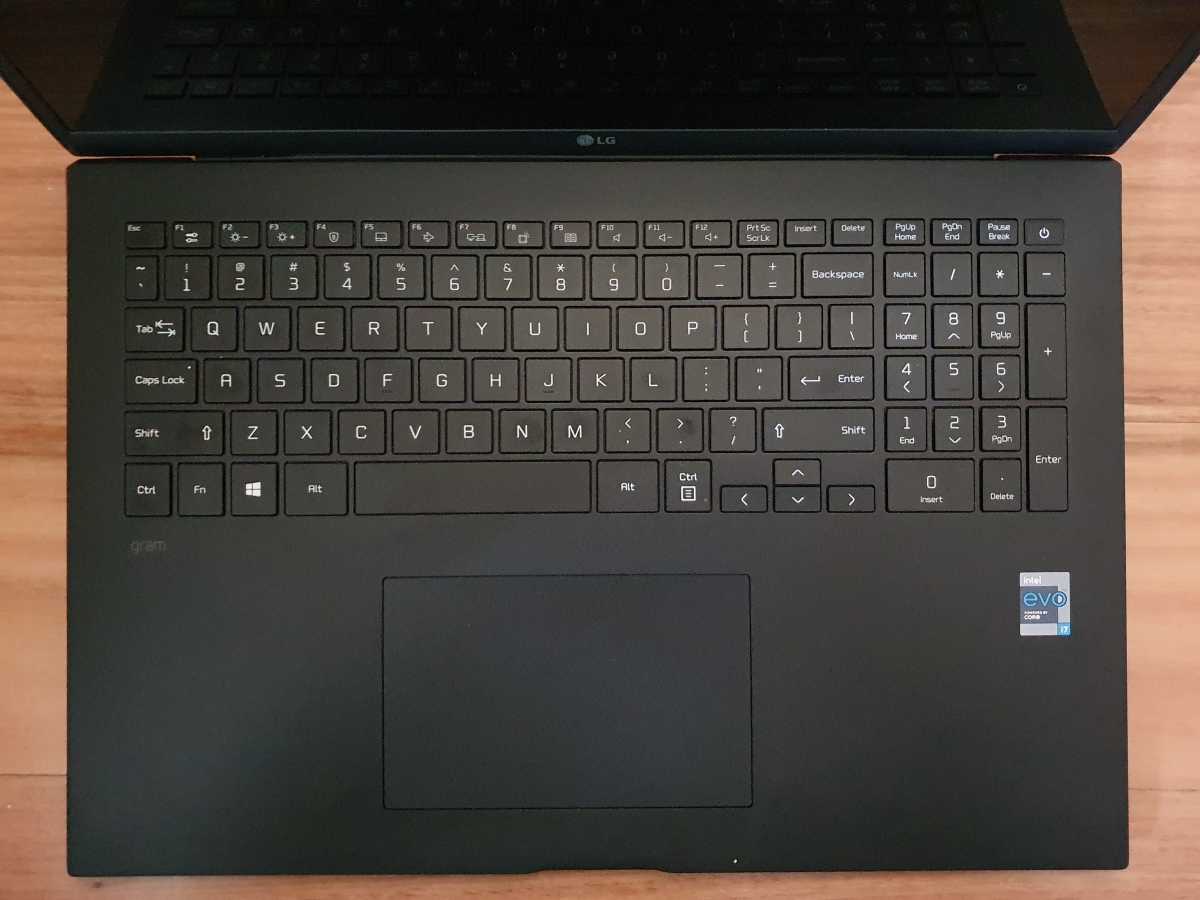 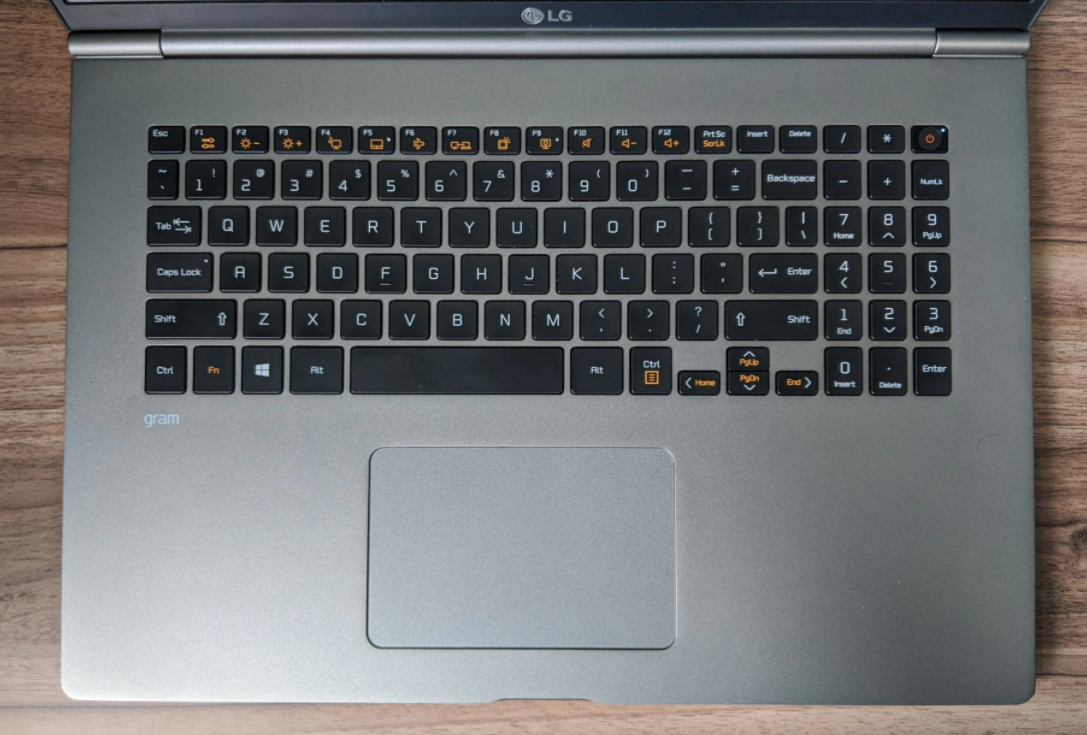 When it came to the laptop's trackpad, the LG Gram 17 left a good impression. The rectangular shaped pad felt silky-smooth to touch and was the perfect size for my fingers to navigate. It also registered solid clicks and was perfectly responsive.

I was hoping the LG Gram 17's WQXGA IPS-grade display would be of a similar quality to LG's premium TV panels. Thankfully, it is. Although not a touchscreen, its 2560×1600-pixel display, which has twice the resolution as a FHD panel, displayed videos and images with an almost clinical crispness.

Specifically, there was an absence of the distortion I sometimes get when viewing images on some FHD panels. The panel's 99 percent DCI-P3 gamut coverage also produced color with a vibrancy you'd be hard pressed to find in a FHD display.

Brightness is its one weakness. LG proffered a manufacturer reading of 300 nits, which isn't great for a 2021 premium laptop (Most budget laptops are this dim or dimmer). With just standard brightness and no matte display, glare can be an issue with outdoor viewing. You might want to stick indoors with the LG Gram 17.

Some may think a whole 17-inch display is overkill, but the Gram 17's panel is the perfect size for productivity. The display, built to a 16:10 aspect ratio rather than a 16:9 ratio, reaches 1600-pixels rather than 1400-pixels high. This provides 11 percent more screen height than a 16:9 panel and makes it easier to have multiple large windows open at once. 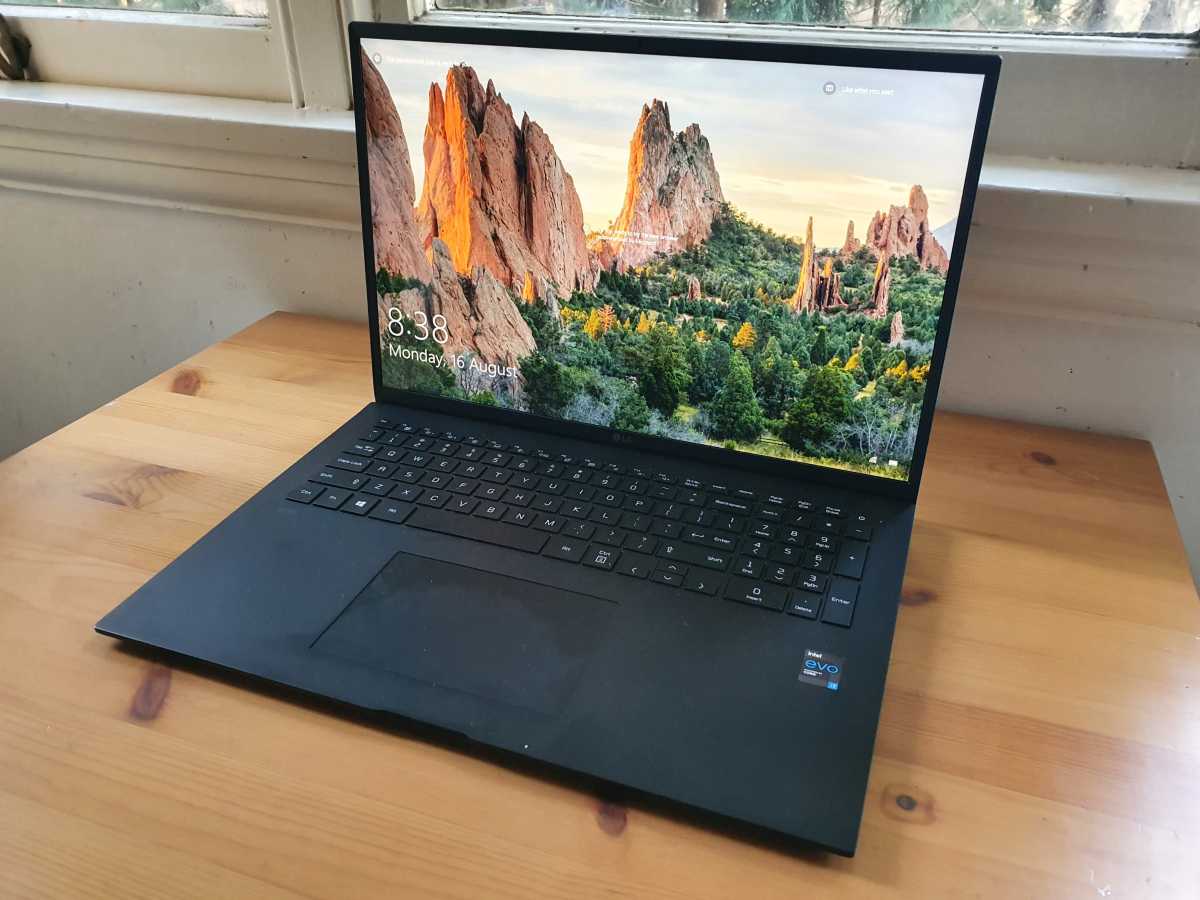 This extra room was particularly useful when I was cross-checking figures between spreadsheets. It's a task that can be highly frustrating without adequate screen space but was a breeze on the LG Gram 17's generous-sized display.

As is often the case with laptop speakers, the LG Gram's two 2-Watt stereo speakers weren't overly impressive. The sound from the downward-facing speakers didn't sound tinny, but it lacked a strong bass presence. Videos are best viewed with headphones in.

The LG Gram 17 has a good complement of ports that should be an asset in any enterprise or educational setting, including 2x USB-A ports, an HDMI port, and an MicroSD card slot. One of the biggest productivity killers is having to wait too long for files to transfer to storage devices but the Gram 17's Thunderbolt 4 ports speed this up considerably. Having two at your disposal is highly convenient, allowing the Gram to benefit from rapid power delivery and charging via one port, while at the same time using the other port to display up to two 4K (with a dock) or one 8K displays.

The addition of the Intel Core i7 11th-gen chipset is the 2021 LG Gram's biggest upgrade and a worthy one. The processor made light work of tasks like browsing and Microsoft Office applications. Our benchmarks confirm its suitability for those lightweight tasks, but not for CPU intensive tasks. To be fair, this is understandable considering its weight constraints; heavier laptops generally have cooling advantages that equate to a performance advantage when things heat up.

For our comparisons we avoided the vanguard power category of productivity laptops that includes laptops like the recently reviewed Acer Swift X and Dell XPS 17. These systems have components like discrete graphics cards that put them in a league of their own. Instead, we chose laptops with Intel i5 and i7 CPUs featuring integrated graphics that are mostly unsuitable as dual-purpose productivity/gaming systems. These included The Lenovo ThinkBook 14s Yoga, Surface Pro 7+, MSI Prestige 14 Tiger, Acer Swift 3, and Surface Pro 7+.

Firstly, I ran the PCMark 10 benchmark that measures overall laptop performance in office tasks like web browsing, writing and spreadsheeting. In this test the LG Gram 17 scored in the high 4900s, outperforming all the comparisons except the Lenovo ThinkBook 14s Yoga that features the same Core i7-1165G7 processor.

The LG Gram again placed a close second the Lenovo ThinkBook 14s Yoga in the next benchmark, the Cinebench R15 Multi-Threaded performance benchmark. This test stresses all the cores of our laptop's CPU by rendering a graphics scene, providing a snapshot of how the laptop can handle general computing tasks. This is a decent result for the LG Gram 17 and bodes well for its ability to cope with a variety of office applications.

In our Cinebench single-threaded benchmark however, the LG Gram 17 slotted in below all but the Dell Latitude 7320 Detachable. This result was unexpected considering the LG Gram 17's multi-threaded performance score.

Moving on to the HandBrake utility test, a CPU intensive benchmark that we use to measure the time our laptop can encode a 32GB 1080P MKV file to Android Tablet. It's a good evaluation for not just CPU performance, but also overall system cooling, as HandBrake encoding takes much longer than most canned benchmarks. In this test the LG Gram 17 lost some performance ground, especially to the Lenovo ThinkBook and Surface Pro 7+ that were significantly faster at this task.

Despite being 3-inches shorter, the Lenovo ThinkBook weighs 4.8 ounces more than the LG Gram 17 and its cores probably benefit from the allocation of some of this weight for cooling. The Surface Pro 7+ also surprisingly outperforms the Gram 17. These results seem to confirm that the Gram 17 will slow down a bit during CPU intensive tasks and suggests the Gram won't excel at creative work requiring 3D modelling, rendering, video editing, or CAD.

In the 3DMark TimeSpy 1.2 benchmark, which provides a look at the 3D graphics performance, the LG Gram 17 proved marginally better than the Lenovo ThinkBook 14s Yoga and HP Elite Dragonfly Max but trailed far behind the Dell Latitude and Surface Pro 7+. Admittedly, this tells us what we already knew—the LG Gram is no gaming rig or creative powerhouse, but won't let you down on the odd chance your company presentation calls you to show off some 3D art.

The Gram 17 topped the chart in our battery test running for just over 13 hours. The value this longevity brings can't be overlooked, and because of the LG's 17-inch size and WQXGA resolution display I thought it might run the 80Whr battery down sooner. Nope. Along with its mystifying weight, LG have effectively eliminated the other major buyer turnoff for larger laptops—lack of battery life. This is a big win for the LG Gram 17.

The LG Gram 17 is the lightest, most portable 17-inch business laptop with productivity chops available today, an achievement for which you'd expect to see some big compromises. Yet its battery life is great, its WQXGA display is roomy and a pleasure to use, and it holds its own in processing power for lightweight computing. All in all, the LG Gram 17 offers a combination well worth the price.

As the Maserati or BMW of laptops, it would fit perfectly in the hands of a professional needing firepower under the hood, sophistication and class on the surface, and gaming prowess (sports mode if you will) in between.

The MSI PS63 is an amazing laptop and I would definitely consider buying one in the future.

This small mobile printer is exactly what I need for invoicing and other jobs such as sending fellow tradesman details or step-by-step instructions that I can easily print off from my phone or the Web.