Incredible speeds and a solid set of features make this a great VPN for power users and newbies. NordVPN offers a lot with its service. There are specialized servers for multi-hop connections, P2P file sharing, and dedicated IP addresses at an extra cost. It also offers a lot of country connections, and the ability to drill down to a specific server if you want. It also works with Netflix and has malware and ad blocking. NordVPN is expensive, but you get a lot of value.

NordVPN has long earned top marks among the VPNs I've reviewed. It's notable for its incredible speeds, a generous country and server count, and the choice of WireGuard or OpenVPN protocols. It has also removed the hard drives from its servers to increase privacy and security. And in its aim to be more than just a VPN, the service is but one product under the larger umbrella organization Nord Security, alongside other services such as the NordPass password manager, NordLocker for secure file storage, and business tools like NordLayer and NordWL.

When you first open NordVPN on Windows, you get a very user-friendly interface. The left-hand rail includes a list of all available countries in alphabetical order. This section also has quick links to NordVPN's specialty servers, such as Onion over VPN and P2P-friendly servers (for NordLynx and OpenVPN), as well as dedicated IP (for an extra cost) and double-hop VPN when using OpenVPN. The rest of the app window contains a map that you can drag around to select a specific country. 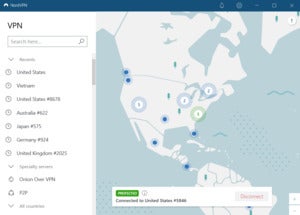 NordVPN with an active WireGuard connection.

Both the list and the map let you quickly decide where to connect. Two interface options are a bit redundant, but this approach accommodates both power users and novices.

The list in the left-hand rail is where most of the power user advantages reside. Hover over a country listing and click on the three dots to the left of the country name. This reveals a pop-up window where you can choose the region of a country (if applicable), as well as any of the servers listed in that region.

If you choose to connect to the U.S., for example, you'd pick the region, which is really one of a number of major cities such as New York, Los Angeles, Chicago, Denver, or Phoenix. Then you can pick any of the servers listed there; each server in the list displays its current load. If you don't want to drill down that deep, NordVPN picks the fastest connection for you based on your country of choice.

Dipping into settings, there are a number of features worth knowing about. The first is CyberSec under Settings > General, which blocks ads and protects against malware and phishing. It's turned off by default, but is well worth using. There's also an internet kill switch, and an app kill switch under Settings > Kill Switch. The latter stops any app from connecting to the internet if an active VPN connection drops, while the former does that for the entire PC. 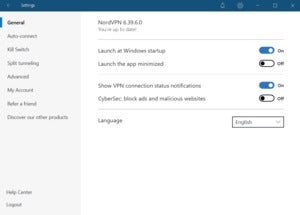 There are also options to go invisible on the local area network, and a specialized auto-connect feature. Auto-connect not only connects you to the VPN automatically but lets you customize that connection. You can, for example, automatically connect to a double VPN or a specific country. You can also choose whether to connect whenever the app starts or only on unsecure networks. The ability to customize the automated connection is an awesome little power-user feature that you don't often see on other VPNs.

You can also set your own DNS provider if you like, as well as use obfuscated servers if you're trying to use NordVPN in a place that blocks it. Nord also has a split-tunneling feature to specify which apps should (or should not) use the VPN connection.

NordVPN advertises that it's compatible with Netflix, and it worked well this time around in my tests, though in the past there have been issues. This is not uncommon as there's a continual cat-and-mouse game between the the long arm of Netflix's anti-VPN enforcement and VPN service providers that oppose it. 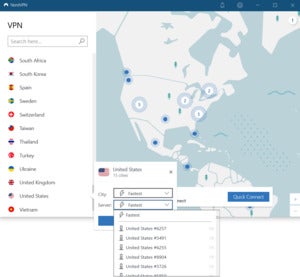 To create an account, NordVPN requires an email address. It accepts payments via credit card, Amazon Pay, Google Pay, and cryptocurrencies. NordVPN costs $59 as an introductory price for the first year, and the current renewal price is $99 for a year. There is also a first-time deals for a two-year subscriptions: $89, and a month-to-month option of $11.95.

NordVPN has come a long way in identifying its leadership. After years of not publishing the names of its owners, the information is out there. This happened around the same time that NordVPN became just one product in a larger portfolio of products under the Nord Security brand. Nord Security doesn't have an official head office, or at least the company declined to say where it was, but it does have offices in Germany, Lithuania, the Netherlands, and the U.S.

Officially, Nord Security doesn't own NordVPN. That honor belongs to a company called nordvpn s.a. based in Panama. Despite all that legal stuff, the management team of Nord Security effectively runs NordVPN and the other products, as far as we understand it. Whether those people are acting as employees of Nord Security or nordvpn s.a. when they make business decisions is irrelevant for our purposes. Nord Security lists 10 people on its management team all with links to their LinkedIn pages. The management listing includes the three founders Tom Okman, Eimantas Sabaliauskas, and Jonas Karklys. Okman is based in the U.K., while the other two are in Lithuania, according to their LinkedIn profiles.

NordVPN's privacy policy says it has a strict no-logs policy, meaning it does not store time stamps, browsing data, used bandwidth, traffic logs, IP addresses, and so on. Third-party audits in 2018 and 2020 confirmed this.

Nord does keep some information for very short periods of time. It keeps the username and timestamp of the last session to monitor simultaneous connection limits. This information is deleted 15 minutes after a session is terminated. It also logs whether a user has logged on in the last 30 days. The company says it needs this data to prevent abuse and to be able to dispute unfair chargebacks.

NordVPN also harvests some data about usage such as app diagnostic data, but you can opt out under Settings > Advanced. It also takes in telemetry data such as opening push notifications, search, and so on. This can also be opted out of by turning off the setting mentioned above. Those who are concerned about the privacy implications of the CyberSec feature can read about it in the privacy policy under Threat Protection feature.

NordVPN also jumped on the trend of running diskless production servers similar to companies such as OVPN and ExpressVPN. Diskless servers don't store any information on them at all. They are controlled and booted from a remote server and everything then runs in RAM. That makes it mighty difficult to pull any user data from these servers. 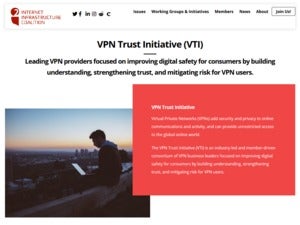 Another step NordVPN takes to increase trust is the VPN Trust Initiative, an effort that includes ExpressVPN, Golden Frog, IPVanish, Ivacy, PureVPN, (of VyperVPN fame), SaferVPN, Strong VPN, and others. The VPN Trust Initiative's goal is to strengthen trust and mitigate risk for VPN users.

The company also published a blog post detailing how it prevents vulnerabilities like the one that occurred in 2018 (it was only reported in 2019). The plan includes penetration testing, a bug bounty program, the new infrastructure audit, vendor assessments, and the aforementioned diskless servers.

That's a lot of effort to get users to trust NordVPN, and we're happy to see the company finally revealing its top leaders. It's also being more transparent about the company structure, but to be honest they're still being a little cagey about the details and the organization seems to be more complicated than necessary. Regardless, anonymity for the people running a company that is supposed to be all about trust just never sat well with us, and we're glad to see this change.

NordVPN's speeds are excellent. In our tests using default settings over multiple days and multiple connect locations, NordVPN was able to maintain 49 percent of the base speed. That's fast enough to qualify among the top five speediest VPNs. We're certain that NordVPN is fast enough for doing pretty much anything reliably.

NordVPN is a fantastic service that keeps getting better. The price is on the high side, but you get a lot more for that money than with other services.

Nevertheless, while NordVPN's excellent service can't be ignored, there are better options, like Mullvad, if maximizing your anonymity is a priority. But if you want something that appeals to power users, has multi-hop, solid speeds, and works with Netflix, then NordVPN is a solid choice.