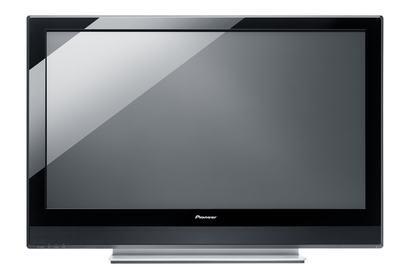 While the PDP-427XDA performs well in High Definition, the issues with SD and PC signals are a factor especially considering the price point.

The Pioneer PDP-427XDA is a 7th generation plasma panel with a native resolution of 1024 x 768 pixels and a built in HD TV tuner. In the past, Pioneer has impressed us with brilliant units like the PDP-5000EX, but this model was not up to those high standards. High Definition content is displayed reasonably well, however this screen doesn't perform as well as the 6th generation model and its Standard Definition performance faltered in many of our tests.

To test the High Definition performance we used the Xbox 360 video game console outputting at 720p resolution. Our first test was a gaming test using Tony Hawk's Project 8 and Tom Clancy's Ghost Recon Advanced Warfighter. Since this is not a 1366 x 768 panel, the signal coming in from the Xbox needs to be scaled down to fit the native resolution. This can cause a wide range of problems, some of which became obvious in our testing.

The panel displayed detail reasonably well, though there was a little pixilation on some of the finer details and noticeable pixel fluctuations across the entire image. Colour reproduction was good but whites were dull which caused many of the other colours to look somewhat flat at times. We attempted to calibrate the unit to correct this but it could only be fixed at the expense of other colours. We noticed some over-sharpening artefacts too, but these were easily removed by reducing the sharpness level via the on-screen menus. While these visual aberrations are present on the panel, from a viewing distance of about 1.5 metres they are barely noticeable, and as such shouldn't have too much of an impact.

We also ran High Definition video at 720p and were very pleased with the result. The pixel fluctuations were still present but were not so noticeable here. The detail and clarity were both excellent, and while there was some noise on block colours, it did not make the screen uncomfortable to watch. There was also some slight ghosting during fast motion, but it was no more prominent than on other plasmas on the market. Overall, we found the 42PDP7XDA to be on par with most mid-range plasmas on the market. In High Definition, the image quality is undeniably good but at this price point, we expected better.

To test Standard Definition performance we have three DVD tests; the Philips CE2006 Demo DVD, Digital Video Essentials and the lobby scene from The Matrix.

In the Philips DVD tests we noticed a moderate level of motion jitter and an overt fly screen effect at a viewing distance below 1.5 metres. The colour and contrast tests showed no oversaturation or stepping and while the white levels could have been better, the blacks were excellent and colour was displayed accurately.

The Digital Video Essentials tests showed pixel fluctuations and noise in low greys up to 40% amplitude which extended on to the colour tests with noise in all colours but most noticeably in red and blue. However by far the worst visual aberration was a pixel bleed where two colours blocks would meet vertically, resulting in an unattractive zig-zag between the edges. This only occurred on the vertical plane, which suggests it is a product of poor interpolation. On the other hand, the black on white contrast test had no problems at all.

The results of our DVD movie test were similar. During the lobby Scene from The Matrix we noticed a large amount of active pixels and scaling noise which often obscured fine details such as facial features. There was also pixilation on curved edges and on fine detail such as debris and smoke particles. There was some very minor stepping at times but generally there were no major contrast issues. There was no oversharpening, no discolouration at all and no problems with motion blur or ghosting. Many of these aberrations became less noticeable from a viewing distance of around 2.5 metres but when you look at the excellent performance of previous models, this is certainly a step down for Pioneer.

Our final test involves testing the televisions PC connectivity. Connecting via D-Sub VGA at a resolution of 1024x768, we ran DisplayMate Video Edition and were less than pleased with the results.

The most noticeable problem we encountered was the pixel fluctuation that was also present in the other tests. However, here they were much more severe and, especially on the main screen of DisplayMate, caused an effect where all gray areas appeared to throb.

Throughout all of our testing this problem was very prominent. In fact, apart from the same colour bleeding and poor white levels, most of the problems we found were varying levels of pixel fluctuations and pixel noise. It was most intense during the moire tests which are normally different still patterns comprised of dots in different configurations. On this panel these images were a mess of pixels all dancing around each other like line dancers on red cordial. If you're looking for a TV with good PC connectivity, we can't, in good faith, recommend this panel.

The 42PDP7XDA has an integrated High Definition television tuner, which is a most welcome feature. Tuning was simple and didn't take too long at all. The channel switching is fast and we had no problems at all with this feature. The lack of an HD tuner was one of the complaints we had with previous models so we are very happy to see it included here.

The speakers are mounted below the panel and pump out a good level of sound without any major problems. There is a small lack of definition it mid-tones but it still sounds excellent, even at high volumes.

The design is in keeping with the Pioneer piano black panels we have come to know and love. This time around the stand is silver in colour and Pioneer has included an insanely wide range of connection options. With two component, two HDMI, four composite, four S-Video and a 15pin D-Sub PC connection, there are very few devices that you can't connect to this unit.

Pioneer has made some truly remarkable panels in the past but unfortunately, the 42PDP7XDA is not one of them. It has too many problems to be considered a high-end product but nonetheless sits at a high-end price point. If you intend purchasing this unit for use with High Definition content, it will do a good job. Watching DVDs will be fine if you have a large lounge room and the panel is at least 1.5 metres away but connecting to a PC is poor so if this is important to you then another panel may better suit your needs.