The biggest drawback is that you'll pay more than you're used to for the service. 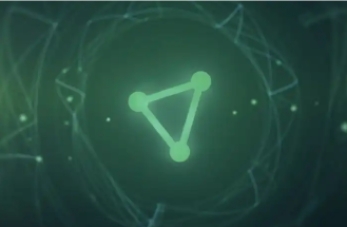 ProtonVPN offers a bunch of security-and privacy-focused features including an easy-to-use multi-hop feature, and support for TOR servers P2P file-sharing. The company has some good privacy policies and great speeds, but the price tag may cause you to wince.

When you use a third-party VPN you have to place a certain amount of trust in your service provider. Some companies make that really hard by hiding who they are or operating out of exotic locations. Then there are services that make trust easier—like ProtonVPN, from the creator of ProtonMail.

ProtonVPN is a great choice for new users. It offers no guesswork about who's behind the service and offers helpful articles about what you should, and should not, expect from a VPN. It also posts an annual transparency report (as do several other VPNs), and explains the encryption it uses. 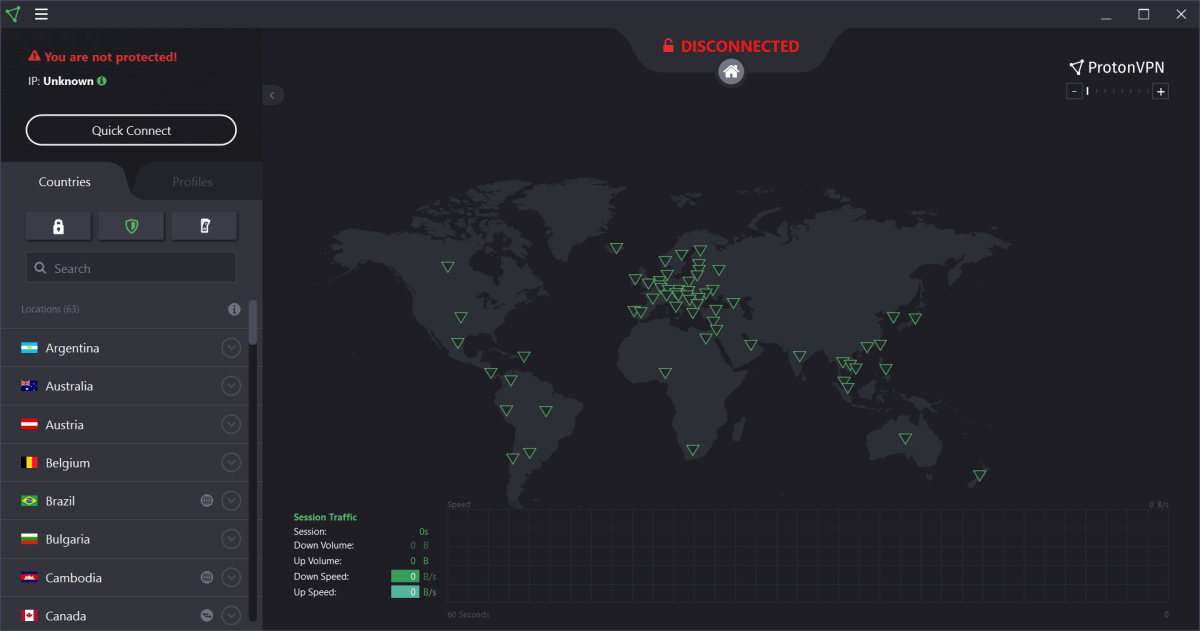 ProtonVPN for Windows starts by displaying a map of the world with green triangles signifying the countries where ProtonVPN has servers. If you prefer to use the VPN without the map, there's an arrow button on the top left to collapse it for a more smartphone-like interface.

On the left rail are your connection options. There's a Quick Connect button at the top if you want ProtonVPN to choose the fastest server based on your current location. Otherwise, you can scroll down the list of countries. 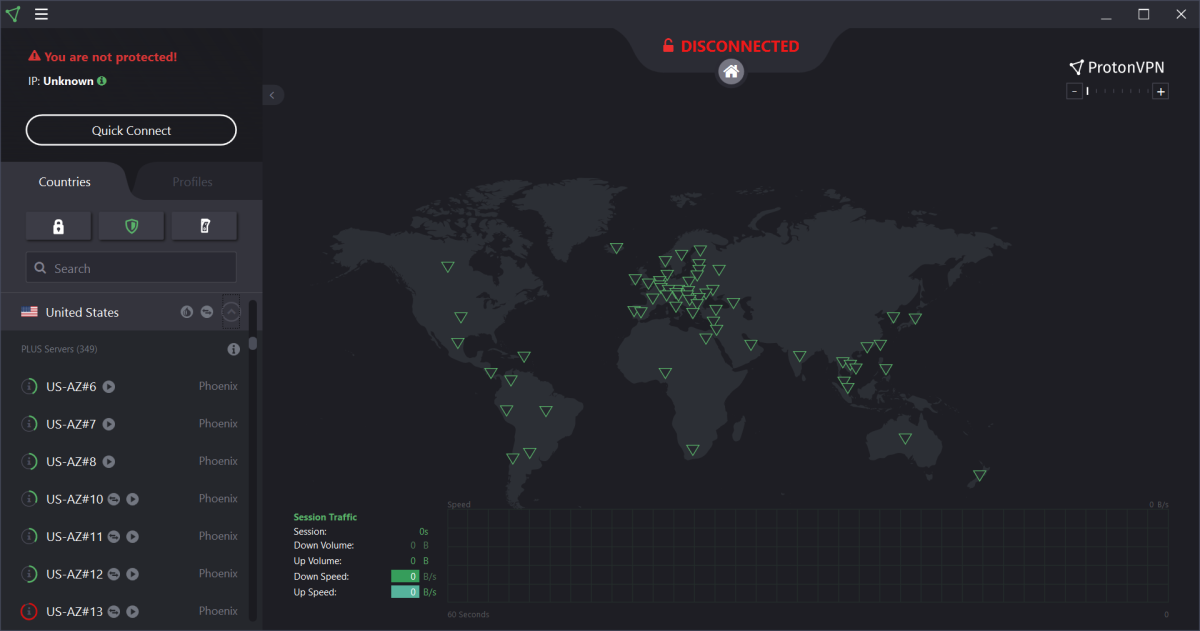 For a deep dive into the country-specific servers, click on the downward-facing arrow to the right of each country in the list. This will show you all the server options for that location. There's a circle with a green indicator for each server showing its current capacity. You can also hover over the circle to find out the capacity measured as a percentage. If you see a P in a square next to a server that means its available only to premium subscribers; there are also TOR servers, and the symbol with two arrows indicates the server supports P2P file sharing.

Once you've connected, the map transforms showing a line to your virtual location and the home symbol at the top center of the map. Below the map you'll see connection information such as session duration, up and down bandwidth volumes and speeds, as well as a bandwidth graph.

ProtonVPN offers a number of extras depending on which level of service you have. The Secure Core feature is for Plus and Visionary subscribers only, for example. Secure Core is a multi-hop VPN connection where it uses two VPN connections before exposing you to the open internet. But unlike typical multi-hop implementations, Secure Core is a one-click affair where you choose the exit country and have minimal options for the first connection. 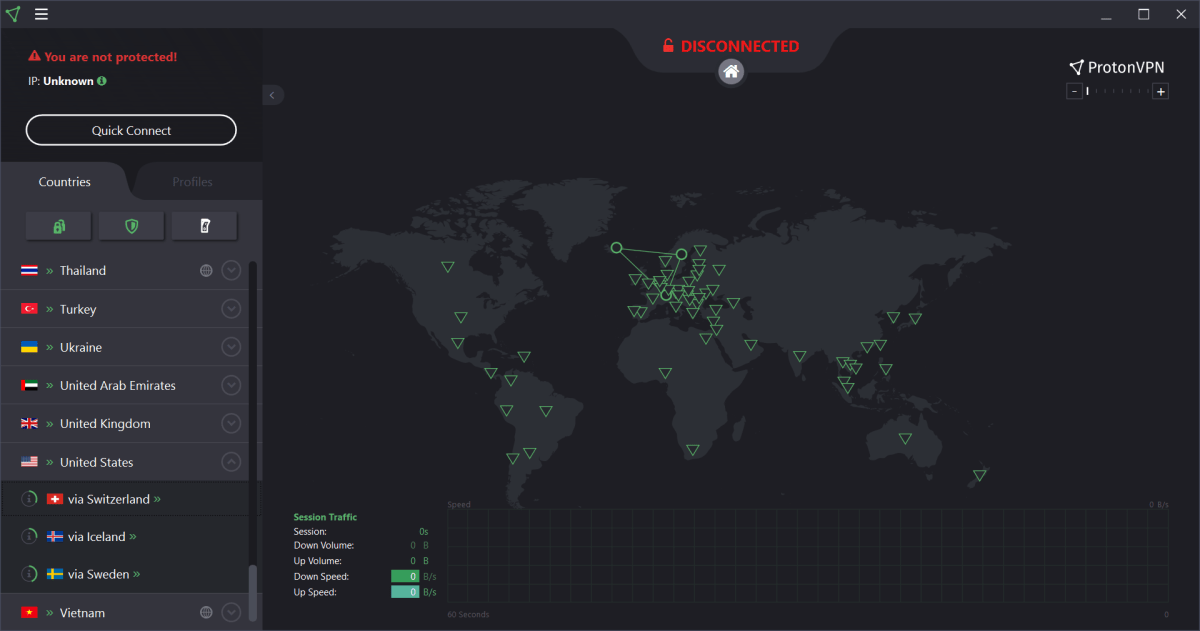 The first hop runs through either Iceland, Sweden, or Switzerland before shuttling you off to the country of your choice—60 country locations support Secure Core exits. Depending on the country, you may have some choice as to where the first hop goes through, but many countries have only one or two of the three options.

ProtonVPN says Secure Core puts your traffic through privacy friendly countries first (Iceland, Sweden, and Switzerland). The aim is to protect a user's privacy as much as possible and defend against network traffic monitoring. ProtonVPN says that this method makes it harder for an attacker to discover a user's true IP address or attempt to match browsing activity to the user. There's a fuller explanation on the ProtonVPN website. Secure Core must be explicitly activated at the top of the country list in the left rail (the button with the single lock or two locks overlapping when active).

ProtonVPN also supports Forward Secrecy, which uses one-time session encryption keys to prevent someone from stealing encryption keys from a VPN session and using those to decrypt earlier sessions.

If TOR is your thing, ProtonVPN supports TOR connections over VPN on specific servers. Again, this feature is only available to Plus and Visionary subscribers.

There are also the usual VPN features such as DNS leak protection, an internet kill switch that halts your internet access should the VPN connection drop, and NetShield for blocking malware, ads, and trackers at the server level. 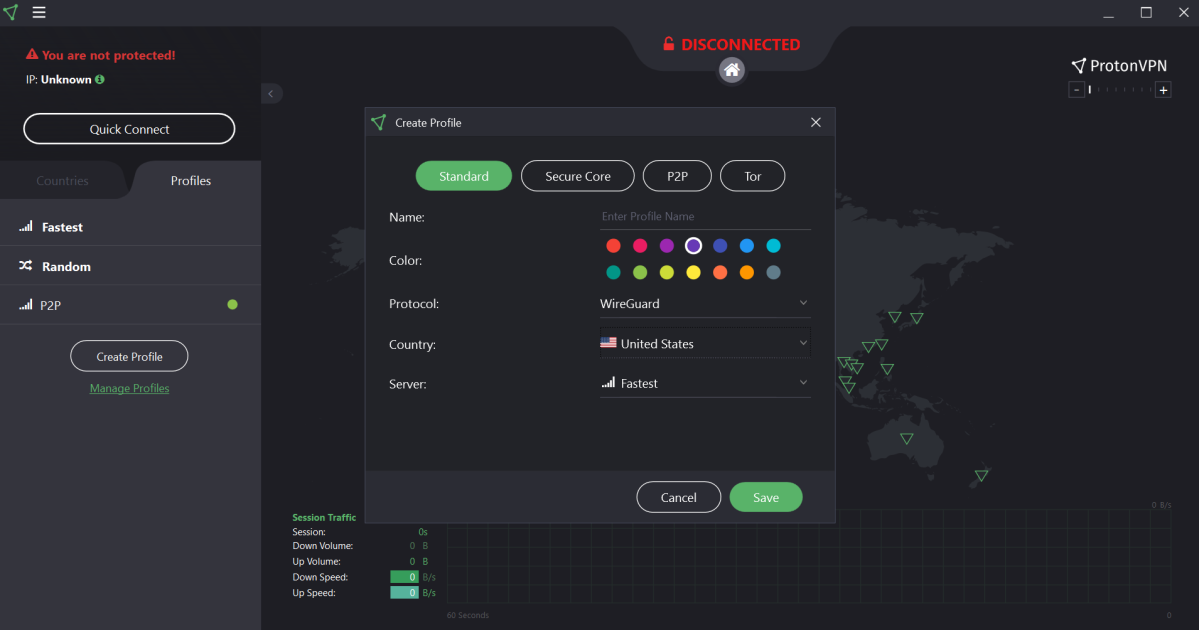 If you want to use different VPN connections based on contexts such as home, work, or travel, ProtonVPN lets you set profiles using the tab in the left rail.

When creating a profile you can choose to use a standard server connection, the Secure Core feature, P2P servers, or TOR servers. You can also choose to use OpenVPN over UDP or TCP or WireGuard, and the specific country and server you want to use.

Beyond VPN configuration, ProtonVPN also touts the security of the data centers it uses in Iceland, Sweden, and Switzerland—the privacy-respecting countries. These are a collection of data centers in former military bases, remodeled fallout shelters, and other hard-to-reach locations. The implication being these servers are physically, as well as digitally, secure.

ProtonVPN is available for Windows, Mac, Android, and iOS. Pricing is varied. The Basic plan gets you high speeds and supports two simultaneous devices for US$48 per year. The Plus plan is US$96 per year, and lets you use the VPN on up to 10 devices simultaneously, offers the service's top speeds, a larger number of servers, TOR, and the Secure Core feature.

The deluxe Visionary package costs a whopping US$288 per year with all the Plus features, as well as a ProtonMail Visionary account.

ProtonVPN is managed by Proton Technologies AG, which also runs ProtonMail. The company offices are in Geneva, Switzerland. The CEO is Andy Yen, and the CTO is Bart Butler.

The ProtonVPN interface with the map hidden. Image: IDG

If you use ProtonVPN on mobile, the company also tracks crash reports. ProtonVPN also tracks the geographic distribution of its users on an aggregated, global level. It uses this data to help allocate resources, and to counteract government attempts to block ProtonVPN.

For payments, ProtonVPN accepts credit cards, PayPal, cash via regular mail, or Bitcoin via direct wallet-to-wallet transfers. To sign up for an account, ProtonVPN requires a username, email, and password.

ProtonVPN boasts up to 10Gbps bandwidth for its servers on the Plus plans, lower-tiered plans have a minimum of 1Gbps. That investment in high-quality speeds appears to have paid off. ProtonVPN comes awfully close but doesn't quite beat our current speed champion, HotSpot Shield.

During the standard tests, ProtonVPN was able to keep 58.48 percent of the base speed based on an average from five different countries over three different days of testings. All speed tests were standout, with almost all of them hitting around 40Mbps. The base speed on testing days was around 85 to 90Mbps.

ProtonVPN should offer fantastic speeds for most people, with the obvious caveat that speed results can change based on the capability of your devices as well as your location, home internet connection, and overall user traffic in your area.

mentioned in this article 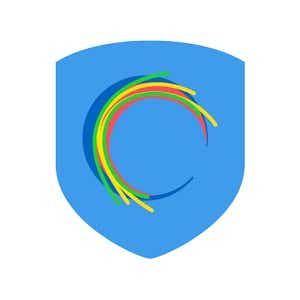 ProtonVPN is a fantastic choice for a VPN. Its privacy protections are excellent, and while it doesn't quite rise to the privacy and pseudo-anonymity promises that Mullvad offers it's still really good.

In my tests, ProtonVPN got past Netflix's regional restrictions, though there were occasional hiccups. ProtonVPN also handled other services such as Disney Plus without issue. Whether you're interested in security, privacy, or streaming, it's hard to go wrong with ProtonVPN.

The significant downside with ProtonVPN is that it's quite expensive, but no more so than other top providers such as ExpressVPN and NordVPN. You do get a lot of value for your money, but if you need something cheaper with similar, or better privacy, then we'd suggest Mullvad.