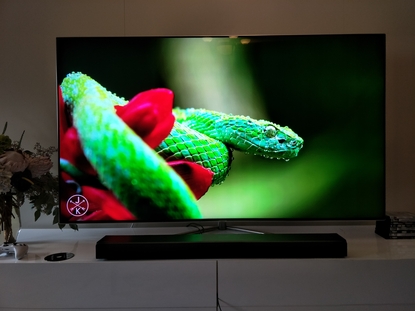 The lesser of Samsung's new top range is better than every Samsung TV we've seen before it. But if you've got this much money to spend, you should look elsewhere.

Update: Before you choose a phone, check out the amazing Samsung Galaxy S8 review.

Few companies seem to make more effort with its TVs than Samsung. The company has become the mass market king of TVs sitting atop an apex kept warm by Sony for so many years. And so it must have been galling to watch the likes of Hisense and LG swan in with cheaper and superior models in recent times and disrupting the market so utterly.

Last year’s models were still good but Hisense’s were even better and much much cheaper. LG’s OLED truly came of age and dropped in price to give us the best all round TV you could buy. So what is Samsung bringing to the table in 2017? The answer is QLED – a refined version of its Quantum Dot (super-bright colour) technology from last year. We were impressed with what we saw in a brief hands-on a few days ago: the new, top models are even more colourful and brighter than last year’s top models. But that’s when showing amazing content – smooth, 60 frames per second, Ultra High Definition showreels. Normal people watch normal TV, Netflix and movies of varying quality and it’s in some of these lesser areas where Samsung has struggled in the past.

Samsung’s 2017 top range has three new series: the Q7, Q8 and Q9. The Q7 is lit from beneath. The Q8 is the same but curved. The Q9 is lit from the sides and is subsequently brighter (2,000nits instead of 1,500) and capable of producing better contrast and true-blacks. The price increases with each number.

It’s not just the lighting that has improved this year but the Quantum Dot technology itself which now uses a metal alloy to produce colours. Samsung says it’s capable of displaying 100 per cent colour volume. You can read more about it, here. Whatever, the reality, when we saw the Q9 side by side with last year’s 9000 series recently, it was clearly brighter and more colourful, if only slightly.

We watch the best content available including 4K Blu-rays with High Dynamic Range, 4K Netflix and high-level YouTube videos to check for top-end colour reproduction and the ability to display true-blacks. We also watch Full HD, HD and standard-definition TV to check for upscaling prowess – stretching a low-definition picture across a large screen without it looking like a pixelated mess with jagged edges takes takes some serious processing skills and yet this is what most people will see when watching regular TV. We also watch really-poor old-school TV shows that were never properly digitised plus low-resolution YouTube clips and downloaded movies in order to see how a TV copes with the type of content that is always going to look bad, just to see if it is watchable.

Our first test is the Cost Rica 4K showreel on YouTube. If colours jump off the screen and slap you round the head that’s a good thing. Few TVs make this test look bad but it gives us a good idea of colour reproduction, smooth-panning ability and shows us if areas of fine detail go all pixelated and blocky.

It was displayed very well with very-smooth scrolling and bright colours across the board. Bu there is a caveat. While colours were always good, the TV needed to be in Dynamic Picture mode in order for them to really pop. When this happened, in some instances the glare from the screen actually became uncomfortable to look at. Samsung itself admits that Dynamic Picture mode is basically a shop demonstration mode - ramping up unsophisticated bright light to make brightly-coloured showreels jump off the screen and grab passers by. You can’t sit down and watch a program with it. Nonetheless, colours were still very good and we had few complaints when we dropped down to Standard and Natural Picture modes.

We moved on to The Martian. The TV automatically detected the 4K Blu-ray player so we didn’t need to switch to Movie mode and remove the panel’s processing – it was passed off to the Samsung disc player automatically. Again, we were impressed. The letterbox bars were better than anything we saw on last year’s Samsung range.

This is due to new anti-reflective layers within the panel. However, as the Q7 is lit from the bottom, when there was a halo effect it was worse there than at the top. The Q9, by comparison is lit from both sides and so the lighting can be turned off along the letterbox bars which should dramatically improve true-black quality – we’re looking forward to testing that.

Panning was super smooth and there was no hint of the ‘hyperrealism’ Soap Opera effect (when image processing starts making characters in a scene look more like actors on set) that plagued Samsung TVs of the past. Colours were good, but noticeably more subdued than the demo reels we’d been watching.

Even in a dark room, the letterbox bars, while visible in bright scenes weren’t distracting. In any kind of light room they’re barely visible. This is a big improvement for Samsung.

Low resolution content was could be a mixed bag but was handled much better than previous Samsung TVs. We also need to remember that we were testing with a 70-inch unit and stretching such a small resolution across such a large screen is never going to end well.

Here we found that Digital Clean View setting could be quite useful. When low-quality programmes were viewed – those with pixilation and background noise – turning it on cleaned things up considerable. The yin to this yan is that on high quality programs it can mess around with the quality. We’d like this feature to have been more automatic as we don’t really see this problem in top competitors, and it can be a bit fiddly to keep navigating through a few menu layers to turn it on and off.

Watching a standard-definition TV movie was generally impressive while regular DVD content had some artefacts around graphics but not to a distracting degree.

All in all, this represents a big step up from last year’s models in terms of quality. The contrast and black performance don’t drag the colour reproduction wins down nearly so much. It’s still not quite as good as the rival Hisense ULED but we’re very keen to see how the Q9 fixes the minor issues that we did have because it sounds like it should

Samsung’s Tizen Operating System has felt a bit sparse in terms of supported apps in the past. It’s still not got massive support compared to Android TV which is used by Sony but isn’t too far behind Opera OS (Hisense) and WebOS (LG).

The best feature about it (and we may be biased here because we switch TVs far more regularly than normal) is the automatic labelling of devices when you plug them in – there’s no more guessing which HDMI input each device uses.

Another great feature is that when you flick between apps they stay open and resume where you left off – whether it’s Blu-ray, Netflix or YouTube. This is great if you regularly flick between channels, drop the remote or have kids pressing random buttons.

Switching between sources is simple. We quickly accessed our USB drive with a variety of videos in a variety of formats and most of them played. Scrolling through high-resolution photographs was also refreshingly quick. You could choose between transition effects, music sources and even rotate them too.

We did have issues with the remote, however. The shiny silver device sure looks pretty, but the smooth surface and lack of tactile distinction between the buttons meant that we were regularly pressing the wrong one. There aren’t many buttons included either – there’s no Settings Menu button meaning that you’ve got several clicks to access them.

There are tactile Volume and Channel switches but few people will be this television set for broadcast TV.

However, the remote’s navigation ring did actually work with the Internet Browser surprisingly well. We could easily navigate around a web browser screen and visit pages. Some competitors make doing that a trial.

A main feature of the remote is that is the voice control which actually works rather well. The frustration of trying to navigate around meant we got were quite happy to embrace voice control quicker than at any time before!

Other features and ports

The main features of the new Q TVs include a recessed no-gap-wall-mount to turn your TV into a picture frame. Samsung is adamant it’s provided the tools for many people to actually do this themselves (according to their own surveys, 88 per cent of TV owners want to wall mount their TV but only 20 per cent ever do).

Furthermore the ports aren’t built into the back of the screen but reside in a breakout box. It’s connected with a bendy optic fibre ‘Clear Connection’ cable.

This means that its fast but also that it can be hidden or built into a wall relatively easily. The fully-featured breakout box has the standard four HDMI connectors, two USB ports, Ethernet, Optical S/PDIF, antennae and even a mini Component port.

Next: Sound and Conclusion