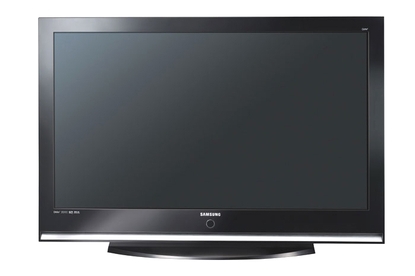 The Samsung PS50Q7HD delivers high-end image quality at a reasonable price. This is a great unit for High Definition and does a good job for Standard Definition.

The Samsung PS50Q7HD is a 50in Plasma display with a native resolution of 1366 x 768 and an integrated High Definition tuner. The image quality in High Definition is superb with no major problems and its ability to display Standard Definition content is quite impressive as well. In fact, across all modes, there were very few tests that this unit had problems with.

To test the High Definition capabilities of the Samsung we connected the Xbox 360 video game console at both 720p and 1080i to run gaming and HD video tests - both of which were displayed flawlessly.

We played Tony Hawk's Project 8 as well as Tom Clancy's Rainbow Six Vegas and found the image quality to be top notch. There was no loss of detail in the image, no noise and excellent clarity. There was some noticeable over-sharpening but this was easily removed with calibration. Most of all we were impressed with the colour reproduction and the deep black levels. Samsung LCD panels are notorious for over-emphasising the colour red but, thankfully, their plasma had no such problem.

We ran 720p HD video from the Xbox 360 hard drive which looked flawless with no noise or any problems to speak of. We also connected the Panasonic DMP-BD10 Blu-Ray player at 1080i. We used the film Into the Blue for testing and were blown away by the image quality. The clarity was nothing short of stunning with every minute detail displayed without pixilation or blemishes. If you are looking for a television to display High Definition content, the PS50Q7HD will do the job brilliantly.

We also ran Standard Definition DVD tests using the Philips CE2006 Demo DVD, Digital Video Essentials and the lobby scene from The Matrix. While the results were not as perfect as the High Definition tests, they were still considerably better than many Plasma panels we have reviewed. In the Philips tests we found no real problems. The motion jitter test showed a level of jitter that was consistent with most panels and the colour, contrast and sharpness tests were all displayed without any aberrations.

The Digital Video Essentials tests revealed a very odd pixel fluctuation phenomenon that we haven't ever seen before. At about 80% amplitude, which is a pale light grey, a strange pixel crawl was noticed. It started from the left side of the grey block and moved to the right. It looked like a gravity defying fountain with pixels being spurt sideways across the panel and eventually fading out. This problem translated to noise and fluctuations in various shades of red and green but didn't impact DVD playback when watching films. While it would be preferable if it weren't there, it didn't seem to have much impact on the image during normal Standard Definition use. We also found some magenta and green discolouration in the greyscale tests, but no problems at all in the greyscale block and the black on white contrast tests.

Using the lobby scene from The Matrix we tested DVD movie playback to see if we could detect any problems or areas where the panel struggled. The Matrix is an excellent test for this due to the speed of the action, the myriad debris in the scene and the green wash that the film is renowned for. The only problem we found was a very minor stepping issue but realistically, it was so insignificant it is barely worth a mention. From a comfortable viewing distance, this isn't noticeable at all. The other aspects we test were all delivered flawlessly. There was no image noise or undue pixilation and the sharpness was excellent. Overall, this unit is excellent at displaying Standard Definition content and will be a great buy for those that love watching DVDs.

We connected the PS50Q7HD to a PC at a resolution of 1360 x 768 and, unfortunately, found a few problems when running our test program, DisplayMate Video Edition. There were no problems in the geometry and distortion tests but we found a minor vertical pixel fluctuation issue with the vertical resolution test at full resolution. The moire pattern tests also showed these fluctuations but they were far more prominent. There was also some minor discolouration in the greyscale tests but no problems at all with the colour block patterns. However, the full greyscale and 256 level grey intensity ramp tests both showed discolouration and stepping. This is not an ideal result but it also isn't that terrible either. While the image was not displayed perfectly, these issues do not translate to problems that would lessen the experience of using this panel as a computer monitor. In fact, we noticed that the level of image retention that we experienced on this model was very low, making it far more suitable for PC users and console gamers than other plasmas. We saw no signs of burn-in effect even when we left a static image on the desktop for extended time periods.

The Samsung PS50Q7HD comes with dual tuners which allow you to watch High Definition or Standard Definition digital television and an analogue channel at the same time via picture-in-picture. We would have liked to see two digital tuners in this unit since analogue tuners rarely look good on large, flat panel televisions, but the fact that it has a HD capable tuner at all is a big plus. In our tests, we found that the digital tuner took about two and a half minutes to find all the channels during set up and had no delays to speak of when switching between TV programs.

The speakers on this model are in keeping with the standard Samsung design and are located at the bottom of the panel facing downward. The sound they deliver is quite good, though we did experience some distortion at their highest volume levels.

As far as design goes, Samsung seems to have found an attractive aesthetic which they use across their entire product range. The Q series plasmas look similar to every other Samsung television on the market with a gloss piano black finish and a neon blue on/off button. The connection options on the rear and right side of the unit include one HDMI, two Component, two Composite, one S-Video and one VGA D-Sub connector. This selection is certainly sufficient for most users needs.

There are very few Plasma televisions on the market that can produce images as good as the Samsung PS50Q7HD. While there were a few image quality problems here and there none of them were severe. We have no problems recommending this unit to anyone looking for a large television that will play High Definition content flawlessly while also adequately displaying DVDs as well.