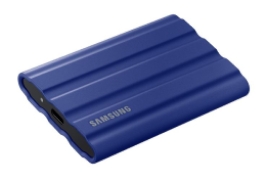 Faster than its Touch predecessor, the T7 Shield is also more rugged. It lacks fingerprint scanning, but is otherwise a faster, more durable external SSD.

If you've had your eyes on Samsung's fast USB 10Gbps T7 Touch, but weren't sure it was suitable for your rough and tumble environment, your conundrum is at an end. The latest iteration in the T7 series–the T7 Shield–is IP65 rated to withstand a wet weather and offers additional protection against shock (though admittedly, shock is a bigger deal for portable hard drives than it is for portable SSDs). This is another top-tier USB drive from Samsung.

The Samsung T7 Shield is a USB 10Gbps enclosure with an NVMe SSD inside. We're a bit surprised the latest version didn't opt for 20Gbps USB, though admittedly, such ports are pretty rare and will remain so until full USB4 implementations become the norm. The T7 Shield is available in 1TB and 2TB capacities for US$160 (AU$222) and US$290 (AU$403) respectively, and you can buy them with blue, beige, or black silicone-like protective coverings.

The drive measures 3.5-inches long by 2.3-inches wide by 0.5-inches thick, and weighs just under four ounces. That's a little heavier than the T7 Touch, but wrapped in a silicone protective sleeve, it's hardly surprising.

The extra weight is inconsequential in terms of transportability, and gives the T7 Shield a nice heft. Indeed, I contemplated hurling it against a wall to test shock resistance. I didn't, though I dropped it from about four feet onto a wood floor with no ill effects. 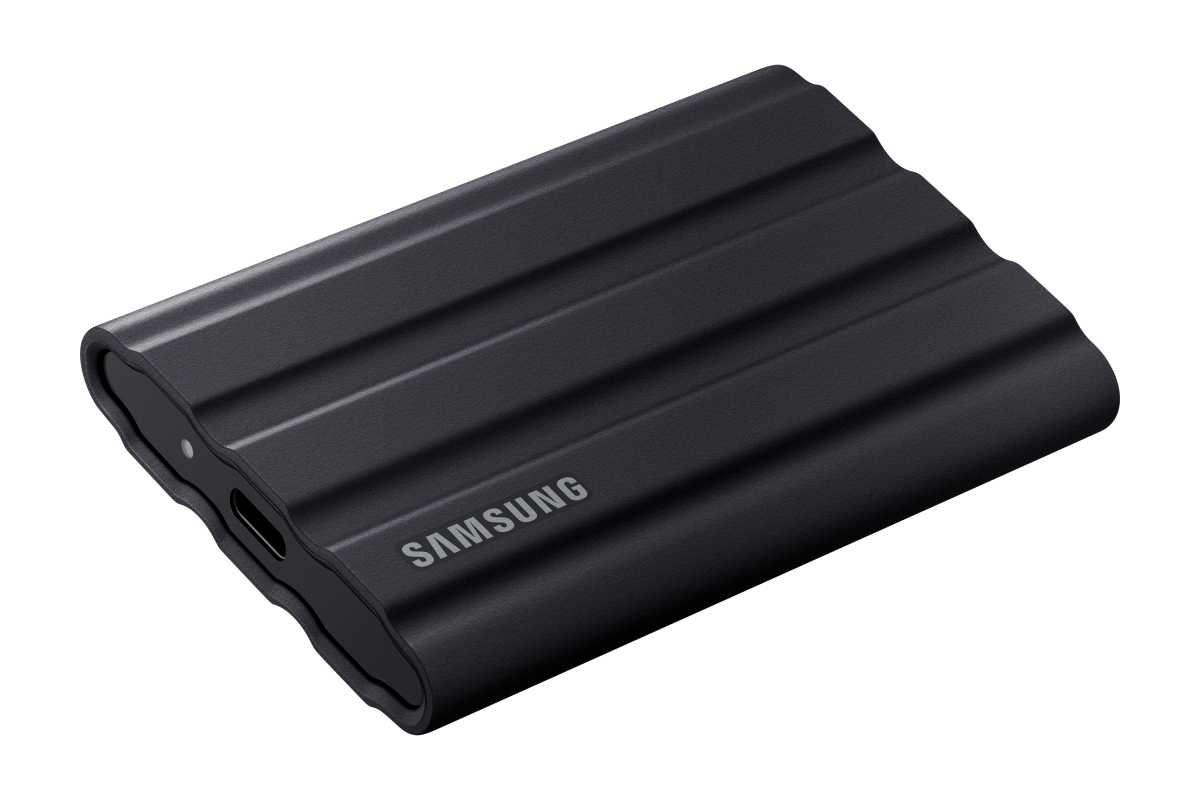 The T7 Shield's USB connector is Type-C and thoughtfully, Samsung includes both USB Type-A to Type-C and Type-C to Type-C cables.

As to the IP rating, 65 is a bit unusual. Most devices claim 67. If you want the entire IP lowdown, read this article by yours truly on our sister publication TechHive. But the gist of it is…

The first number, 6, means the T7 Shield can keep out just about any kind of particulate matter. The second number, 5, means you can spray it with water, but not immerse it. (7 would indicate that immersion is survivable). No doubt the Type-C port is the culprit for the lower liquid resistance rating, though we've seen them on plenty of Bluetooth speakers sporting the same port that claim IP67. Most cover the port with a captive plug, but not all.

Perhaps, Samsung is just a little more conservative in their conclusions. I'm not saying drop the T7 Shield in the pool, but I wouldn't be surprised if it survived a short dip—as long as it's not connected and active. If it is, you've got other issues. 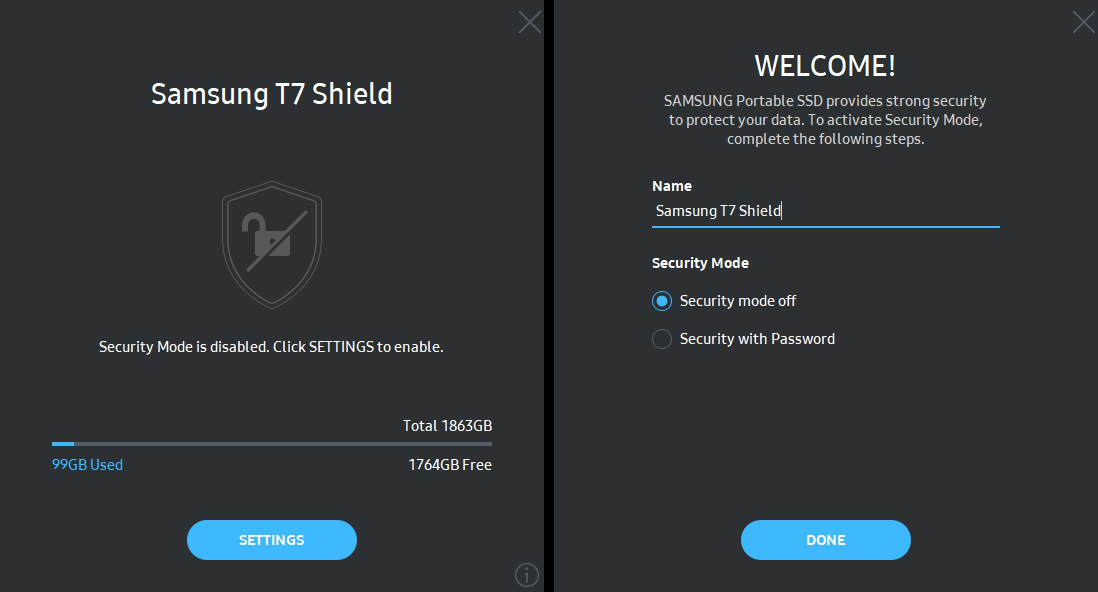 Samsung's Toolbox for its external drives. With the Touch you get fingerprint security. With the Shield you set the password and must have the software installed in any computer you wish to mount the drive on.

Though the Shield lacks the Touch's fingerprint reader, it can still be password secured using Samsung's Portable SSD software. Of course, you must then install said software on any computer you want to access the drive from. That's certainly not as handy as a simple finger scan, but workable.

The Samsung T7 Shield showed a noticeable performance improvement over its T7 Touch predecessor, especially when it came to writing files. Then again, our Shield test unit was 2TB, where the Touch was 500GB. This will make a difference, especially during long writes as the drive can treat more NAND as single-bit/level, SLC secondary cache.

We recently switched to the latest CrystalDiskMark, version 8.04, and a new testbed so these charts are not direct comparable with those for previous drives. The two drives the Shield is compared to below were retested, however. That said, CDM 8 demonstrates that noticeable write speed improvement I just spoke of. (Right-click on images and choose Open image in new tab to see full-size versions.) 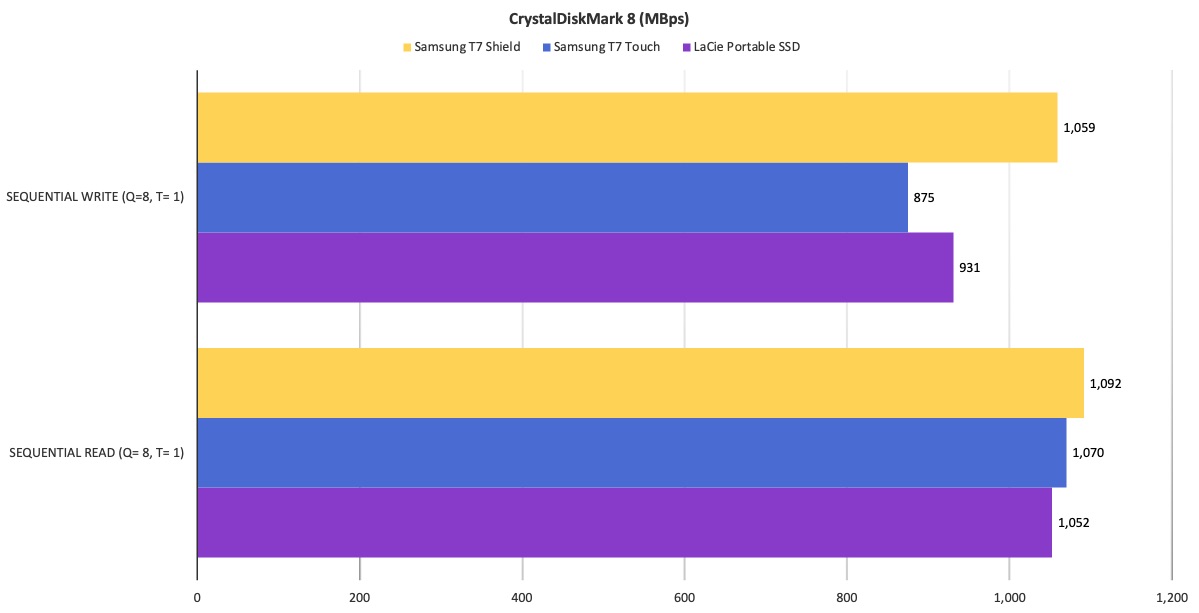 Quicker writing was also largely responsible for the better overall performance in our 48GB transfers shown below. The older Touch actually proved a slightly faster reader. 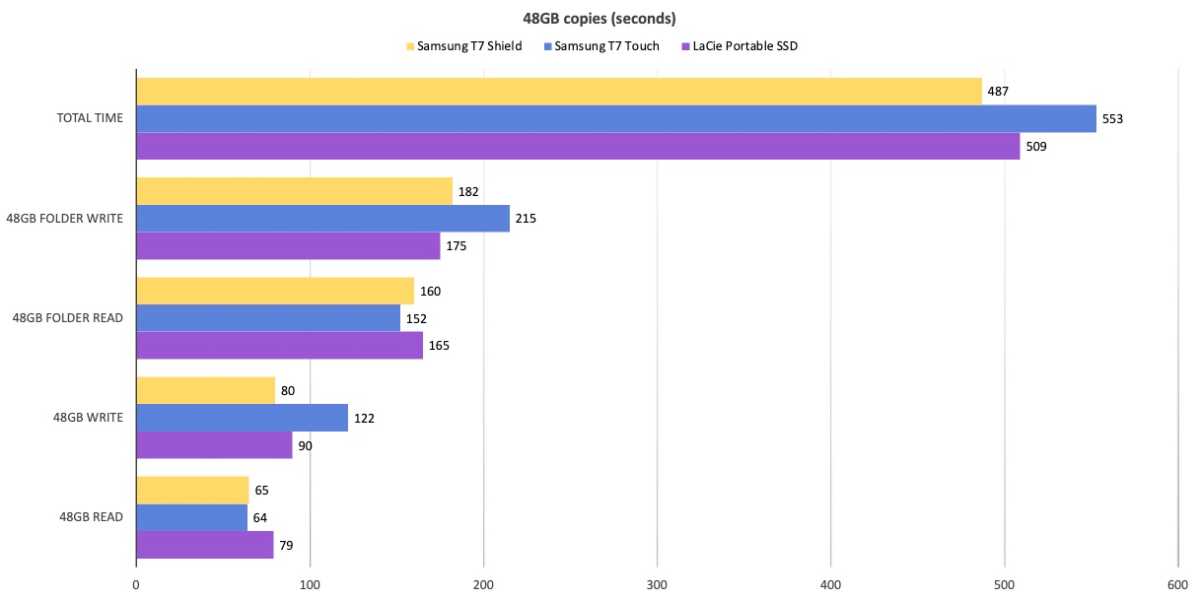 The T7 Shield is a fast 10Gbps SSD and significantly faster than its predecessor writing.

Having 2TB instead of 500GB to play with was a boon for the T7 Shield when it came to writing our single large 450GB file. That said, the LaCie was also 2TB and not as quick. Samsung has obviously been upping its game (or components) since the last T7 iteration.

Having lots of NAND to use as cache helps during long sustained writes.

There aren't many 10Gbps SSDs that will top the Samsung T7 in performance.

Though we'd like to see a bit better water-proofing, the Samsung T7 Shield is indeed a much better drive for harsh environs than the Touch. Obviously, it lacks the convenience of fingerprint security that the Touch offers, but it's a better performer and you can still secure it via software. Again: This is another great portable drive from Samsung, and highly recommended.