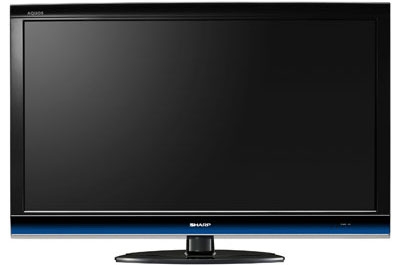 The 42in Sharp LC42D77X LCD television uses a traditional fluorescent backlight and offers 100Hz motion smoothing. It has good colour accuracy, motion handling and a crisp picture, but the multimedia features other companies are starting to implement are noticeably lacking.

The LC42D77X follows the design cues of other Sharp AQUOS TVs, like the Sharp AQUOS LC37D53X and Sharp AQUOS LC46D85X, with a thin piano black bezel that’s slightly rounded at the corners and edges. The D77X series distinguishes itself with a thin blue accent that runs along the bottom of the lower bezel; we think it adds an interesting element to an otherwise standard design. A swivelling stand is always a useful feature, and we were pleased to see one included.

Sharp has seen fit to include the standard line-up of connectors. Three HDMI ports will take care of the majority of devices you connect, but there are also two component, one S-Video, one VGA and three composite ports to connect any older devices or PCs you might want. Four HDMI ports are becoming standard on other televisions, so the Sharp LC42D77X is a little behind the curve; we seriously doubt that many users would take advantage of a fourth (or even the third) port, though.

Sharp has taken a different tack with its LCD televisions to Sony, Pioneer and Samsung, whose TVs often have integrated multimedia features that allow users to stream movies as well as music and photos over a network or via USB. The Sharp LC42D77X doesn’t have any of these features; you’ll need to connect a suitably-equipped digital video recorder or home theatre to view this content.

What the Sharp LC42D77X does best is display high-definition, standard-definition television and Blu-ray content. We tested it out with the ONE HD channel broadcast, which is a 1080i signal, as well as a Transformers HD-DVD through an Xbox 3660 HD-DVD player. The LC42D77X didn’t disappoint, with great clarity and detail visible. Sharp claims the new ASV ‘Superlucent’ panel prevents cloudiness and loss of detail; we can believe this, given the ease with which we were able to notice the artificial film grain on the Transformers HD-DVD.

Sharp’s Fine Motion Advanced 100Hz system doubles the frame rate of video content to enable smooth and jitter-free viewing. It’s not as advanced or adjustable as systems from other manufacturers but it nonetheless does a good job of improving fast motion when enabled.

All up, Sharp has a simple yet powerful television in the LC42D77X. It handles the tasks of displaying high-definition and standard-definition content well — but the inclusion of some multimedia features would make it a better all-in-one package.