The latest iteraton of this dual-screen powerhouse gets a better design and beefy specs.

It offers an amazing amount of performance and value. 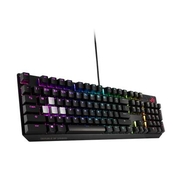 In Pictures: ASUS debut a striking concept motherboard at Computex 2019

ASUS a radical and futuristic concept motherboard during their press conference at this year’s CES. Here’s a closer look at it.

In Pictures: We take a sneak peek at ASUS' Computex hardware

We got the chance to take a closer look at ASUS' Computex hardware, including the new Zenbook Duo and Zenbook Pro Duo.

In Pictures: We take a closer look at the new Vivowatch BP

ASUS announced the world's first health tracker with blood pressure tracking at their Computex 2018 press conference. Here's a closer look at it.

ASUS ended their Computex press conference with a bang by unveiling a new AI-driven, dual-screen concept product called Project Precog - but that wasn't all.