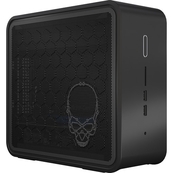 Intel Hades Canyon NUC review: An ultra-compact gaming PC in a category of its own

This one literally goes up to 11. But is it Spinal Tap or Rolling Stones?

Intel threw a shindig down by Sydney Harbour to celebrate the launch of their latest 10th Gen processors. Here's a quick look at what went down.

It's that time of year again. Here's a look inside Intel Extreme Masters Sydney 2019.

Here's an inside look at Intel's 2019 CES press conference.

Here's a look at some of the tech, games and pro-level play that was on display at this year's IEM Sydney.