Microsoft pretty much nails both content creation and consumption with the Surface Laptop Studio, though it's a premium design that's a little rough around the edges.

Microsoft's latest Surface ushers in Windows 11 with some great features and odd quirks. 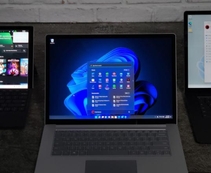 Windows 11 contains some good ideas. But it also feels like Microsoft made some fundamental changes to Windows for no good reason.

Microsoft's Xbox 360 has a truckload of games, a winning online formula with Xbox Live, and a controller that set the bar when it came to easy ergonomics.

Tech lovers and party-goers alike headed down to Mrs Macquarie's Chair to be part of the world-first Windows 10 Launch Party. The night featured a presentation by Microsoft Australia managing director, Pip Marlow, DJs, live demonstrations and digital artistry by Lister.

In Pictures: User guide to Windows 10

If you’re going for an immediate upgrade to Windows 10 from your Windows 7 or Windows 8/8.1 computer, this guide will get you up to speed as quickly as possible.

Windows is full of niggling little irritations. These tools fix them.